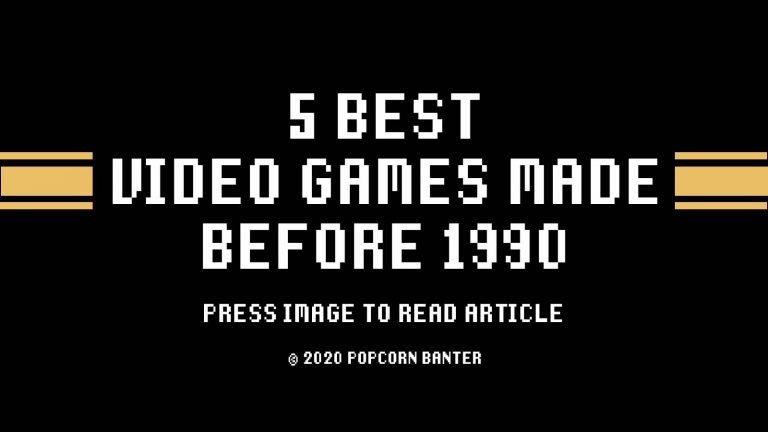 With so much video game chatter these days focussing on high end graphics, rendering and computing power, it’s understandable if you’re feeling a little overwhelmed. The gaming industry is going from strength to strength every year. As technology improves, the ability for game developers to bring their visions to life increases all the time. The games that we, as consumers, are now able to play are nothing short of extraordinary and the talent of the developers that make up the creation studios should not be under appreciated.

With that being said, let’s go back to that word “overwhelming” again. Whether you’d like to see it as a positive or a negative (for what it’s worth, we think it’s awesome), games are definitely overwhelming these days. Their incredible graphics and in-depth and diverse gameplay allow us to get as close as possible to living in that world. However, sometimes we all yearn for a little simplicity. Every now and then it’s fun to blow the dust off our old consoles, or modern iterations of our old consoles, and play very slimmed down and basic games that provide us with a lot of enjoyment.

In this article, we’re going to look at the 5 Best Video Games Made BEFORE 1990.

Originally titled, “Mike Tyson’s Punch Out!!”, this was a first of its kind boxing game developed for the NES. The game allows you to play as little-known boxer, Little Mac, as he attempts to make his way up the totem pole of the World Video Boxing Association. After coming face to face with some difficult and colourful characters along the way, the ultimate goal is to defeat the world’s best boxer in a “Dream Fight”. In original version of this game, this was Mike Tyson, but in subsequent versions this boxer was known as Mr. Dream.

Punch Out!! was also an arcade game and has spawned many subsequent games on various consoles throughout the years. The original game sold more than 2 million copies after it’s released and features in many critics all-time lists.

The user plays as Samus Aran, an ex-solider turned galactic bounty hunter. If you’re not familiar with the Metroid games, you’d at least know of Samus through her presence in Super Smash Bros. Set on the planet Zebes, Samus travels the planets caverns hunting space pirates. At the beginning of the game, Samus only has a weak beam from her exoskeleton to help defend her against the pirates. As the game progresses, the player unlocks more powerful weapons and better armour.

Metroid is widely regarded as one of the more advanced games of its time. The franchise has developed many games since and the original version has been distributed via unlock-able content in more contemporary versions, and through the release of Nintendo’s classic systems.

Tetris was, and still is, one of the most popular games in the world. Throughout the years it’s had many reincarnations, but here we are specifically speaking of the Nintendo developed version that debuted in 1989 for the Nintendo Entertainment System. Tetris is a simple game in nature; arrange the bricks strategically on a vertical board to eliminate full rows. But as the game progresses it becomes faster and faster and players must rely on their reflexes and quick thinking skills in order to reach the highest levels.

The NES version was the first console-version of the game, which is probably the reason for it’s community-wide acknowledgement as one of the best Tetris games. It’s the 9th highest selling video game of all-time, with over 40 million copies sold.

2. The Legend of Zelda

During the game, Link navigates the land of Hyrule, battling through a landscape of monsters and enemies in order to rescue the beautiful Princess, Zelda. Along the way, Link uncovers secrets and discovers new powerful weapons.

The Legend of Zelda sold over 6 million copies on release. It’s legacy spawned a myriad of updated and advanced games. Those games remain as one of Nintendo’s best selling titles on their most contemporary consoles.

An honourable mention must go to Zelda II: The Adventure of Link, released in 1988, which is also widely regarded as one of the best games of this era.

Super Mario Bros. was the console successor to the 1983 arcade game, Mario Bros. The game had a simple premise; charge your way through the Mushroom Kingdom, avoid countless obstacles along the way, enter Bowser’s Castle, defeat Bowser and save Princess Peach. Anyone who owned a Nintendo Entertainment System, owned and loved this game.

The games simplicity, smoothness and use of precise controls are just a few of the reasons why it’s frequently added to Best Video Games of All Time lists. Super Mario Bros. was the kind of game that you could easily spend hours and hours playing; and many did.

The game sold more than 40 million copies throughout its lifespan and is the 6th most purchased video games ever.