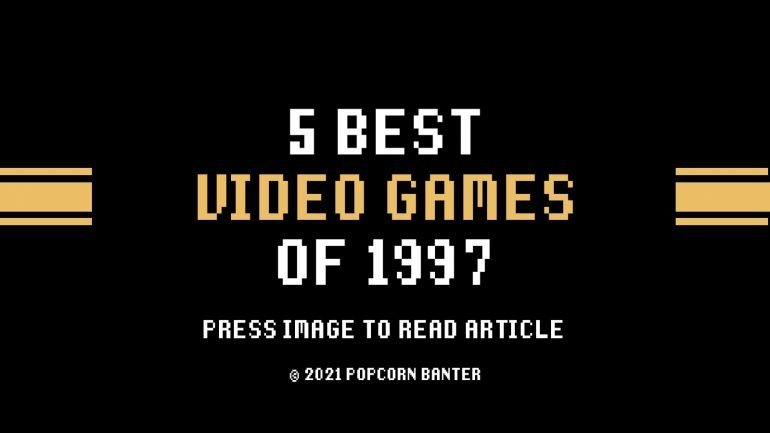 We’re taking a walk down memory lane as we countdown the 5 Best Video Games of Every Year. In this edition, we’re looking back at 1997. Check out the list below.

Let me take you back on a journey to 1997. It was a glorious time for gaming fans. Consoles were beginning to reach spectacular heights, while the games being released were, in some cases, becoming instant classics.

The Nintendo 64 was in its second year for Japanese and American consumers. The console then made a long awaited debut to European and Australian gamers in 1997. From the PlayStation side of things, the PlayStation (or PS1) was continuing to dominate after it’s 1994 release (in Japan).

Of course, the Gameboy, PC & Sega consoles were also around and, for the most part, doing quite well. However, none of these were able to match the dizzying sales performance of the N64 or PS1.

As you will soon see, 1997 gave us 3 games which have certainly survived the test of time.

5. Castlevania: Symphony of the Night

Castlevania: Symphony of the Night was developed and published by Konami (Metal Gear, Frogger, Yu-Gi-Oh! & Pro Evolution Soccer) exclusively for the PlayStation.

The interesting aspect of Symphony of the Night was that it was initially a poor seller. The game struggled in the early days to get over with fans. However, as time went on, word-of-mouth began to spread and the game developed a strong following. This led to the game selling over 700,000 copies in both the US and Japan.

Critically, the game is held in high regard. Castlevania: Symphony of the Night is widely known to have terrific gameplay innovations, as well as a strong soundtrack and visuals.

Age of Empires is a real-time war strategy game. The concept is simple, but the execution is increasingly difficult.

You begin the game as a few modest settlers. Your goal is to build a settlement, grow your resources, and eventually, conquer the map.

On a personal note, the Age of Empires series is one of my favourite series of all-time. The beauty of the game is the ability to get completely lost in your settlement. It’s ridiculously easy to sink multiple hours building a flourishing and safe civilisation.

Technically, the mantle of best Age of Empires game (so far) is owned by Age of Empires II. But such is the quality of Age of Empires, it remains very much playable and enjoyable, some 24 years after it’s initial release. That’s an incredible achievement for a late 90’s PC game.

For many, the original Age of Empires is brimming with nostalgia, but this shouldn’t discount the fact that, at its core, it’s still a very good game. Age of Empires was a sales success. The game sold over 25 million copies.

The success of the game spawned 2 direct sequels, with a fourth on it’s way in late October, 2021.

Final Fantasy VII is often regarded as one the best in the Final Fantasy series. This is no mean feat for such an expansive franchise.

Final Fantasy VII was developed by Square exclusively for the PlayStation console. The game was a financial success and earned universal admiration from critics and fans. Final Fantasy VII sold over 12.8 million units.

The game is often giving credit for popularising the RPG genre, as well as boosting the sales and credibility of the PlayStation console.

Mario Kart 64 was not the first in the series, but it was the title that kick started one of Nintendo’s most successful franchises. Super Mario Kart was available on the SNES, and while it was fun, the game lacked the panache needed to elevate the game to legendary status.

Technically, Mario Kart 64 debuted in 1996, but the games release occurred in mid-December, and only for the Japanese market. The result of the world received the game in between February and June of 1997. For this reason, Mario Kart 64 is getting slapped with a “Released in 1997” badge.

For it’s time, Mario Kart 64 was basically a flawless game. It was the ultimate party/multiplayer game, while the graphics and in-game immersion were well ahead of its time. Critics of the game’s graphics need only look at corresponding games, such as Crash Bandicoot Racing (which came out 2 years later) on the PS1. It wasn’t the Crash Bandicoot Racing was a poorly made game, it’s just that Mario Kart 64’s visuals far surpassed any of its contemporaries.

Although the game debuted in 1997, Mario Kart 64 was being played, in large numbers, well into the 2000’s. It wasn’t until Mario Kart Wii was released that the game lost its unofficial status as ‘best in the franchise’.

Mario Kart 64 sold almost 10 million copies worldwide. It was the second best-selling game ever on the Nintendo 64. What an accomplishment!

Goldeneye 007 was a game played by the vast majority of gamers. It’s generally regarded as the best of the 007 franchise. This is a significant feat considering there are over 2 dozen James Bond games.

Goldeneye 007 is a first-person shooter, and stands as one of gaming’s greatest FPS. In modern times, the games graphics are a little rough around the edges, but that can easily be put to the side thanks to some timeless gameplay and a legendary soundtrack. Goldeneye also features a bunch of unlockables, while the games simplicity has a way of outshining many of its modern day FPS rivals.

The game also featured a wonderful multiplayer mode. Funnily enough, this was only added a few months prior to release. It’s incredible what they were able to do in quick time frames in the 80’s and 90’s gaming scene. Goldeneye 007 multiplayer mode stands as one of the best, and most enjoyable, multiplayer modes of any game from any era.

Goldeneye 007 sold more than 8 million copies. This places it as the third best selling Nintendo 64 game of all-time.