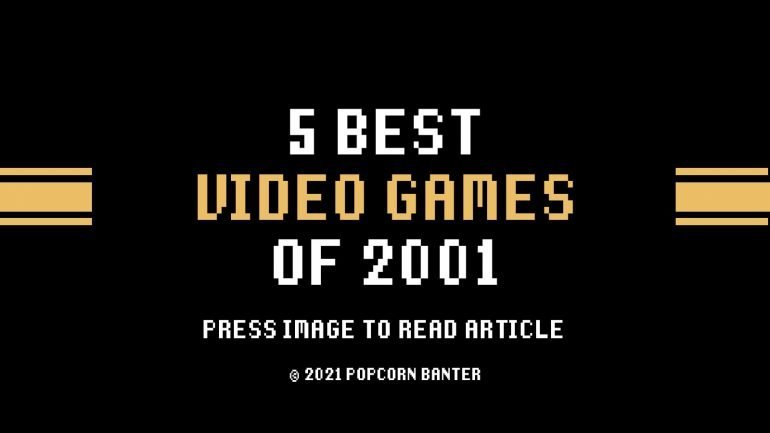 We’re taking a walk down memory lane as we countdown the 5 Best Video Games of Every Year. In this edition, we’re looking back at 2001. Check out the list below.

It wasn’t until I started looking through the years releases that I realised how big of a year 2001 was for gaming. For instance, it wasn’t simply what games were released, but the amount of games that kick started huge franchises. You’ll soon see what I mean.

However, even games that weren’t lucky enough to make this list still hold a lot of weight 20 years after their release. Some of these games include:

2001 was also the year that Xbox made its way into the console market. With its arrival, a new console war officially begun. With the arrival of Xbox into what was already a hot market, PlayStation and Xbox quickly become the dominant primary consoles across the marketplace (however, this has fluctuated over the past 2 decades).

Our opinion on which games are best won’t necessarily be swayed by critical response or public opinion. However, for the sake of clarity, we will still add the Metacritic score to each of the listings.

Let’s take a look into what was a fantastic year for gaming and countdown the 5 Best Video Games of 2001.

Metal Gear Solid 2: Sons of Liberty released on November 12, 2001 and continued the stories progression. It was the fourth Metal Gear game in a franchise which began in 1987.

The game sold more than seven million copies globally. The game received wide praise for its attention to detail, gameplay and graphics, which were fairly advanced at the time.

Upon its release, the game received wide critical and fan acclaim. Many point to the nice visuals and simple controls as a point of strength.

Super Smash Bros. Melee sold very well upon its release. It would go on to become the GameCube’s best selling title, selling over 7 million copies.

The game continued it’s glorious run of form with updated graphics, new tricks and anything A+ soundtrack.

Tony Hawk’s Pro Skater 3 was actually the final game ever produced for the Nintendo 64. A fun fact I’m sure you’re going to want to trot out at parties (I know I will be).

Although it was very much in its infancy, Tony Hawk’s Pro Skater 3 was the first game released on PS2 to allow online play.

However, not everyone was happy about the game’s arrival. Many argued that the 3D graphics only enhanced the spectacle of blood, gore and illegal activities. These are sentiments that have plagued the franchise for its entire run. Although, no fan of the game really seems to care.

The game also receives large points for bringing the open world style to life. It may not have been the first to do so, but GTA III’s success has spawn nearly two decades of open world franchises.

Grand Theft Auto III was the Best Selling Video Game of 2001 and has sold over 14 million copies.

In terms of what a game did for a franchise, or even a console, there’s no doubting the impact of Halo Combat Evolved.

Also known as simply, ‘Halo’, the game was released as an Xbox exclusive when the console hit shelves in November 2001. The game is set in the 26th century, with players taking on the persona of Master Chief. Master Chief would become one of the most recognisable and popular gaming characters of all-time.

The game took off in leaps and bounds almost immediately. Halo is routinely referred to as one of the greatest games ever. The game helped spawn an enormous franchise, helping the Xbox maintain its popularity for the past 2 decades.

Halo sold more than 5 million copies worldwide, a considerably effort for a game which was released on a brand new console.