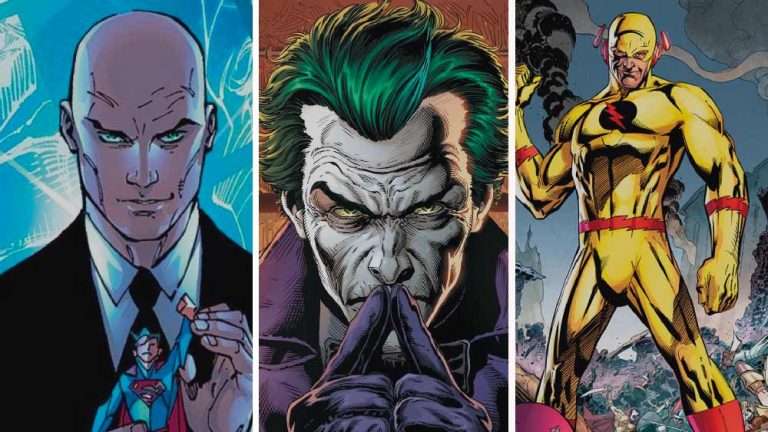 Our 5 Greatest Ever DC Villains

Many of the greatest stories ever told can trace their success to the unequivocally gripping nature of good vs evil. It’s a formula that has played out in stories as old as time. Of course, this is a simplified take. However, it’s hard to argue that it’s the exact reason the comic book genre has found a multi-billion dollar place in the hearts of the worlds moviegoers.

In this article, we’re going to look at the more villainous side of these stories. We’ve dug through the DC archives, taken into account our own personal feelings, and put together a list of Our 5 Greatest Ever DC Villains. For the record, this list takes into account the use of these characters through comic books, graphic novels, live-action TV, animated TV, animated movies and live-action movies.

This sort of article is sure to cause debate. We’d love for you to let us know your thoughts in the comments sections below. Make sure to check the bottom of the article where we’ve detailed all of those who weren’t lucky enough to make the cut, but still deserve an honourable mention.

DC fans who predominantly stick to the big screen will be familiar with Ra’s Al Ghul through Christopher Nolan’s, Dark Knight Trilogy. Specifically, the character appeared in Batman Begins as Bruce Wayne’s mentor, Henri Ducard. Later he would reveal himself as his main antagonist, the head of The League of Shadows, Ra’s Al Ghul.

Of course, comic book-wise, Ra’s Al Ghul is actually the head of the League of Assassins. Which is obviously a much more specific and menacing name. Although it wouldn’t be fair to call his live-action adaptation one-dimensional, his appearances throughout DC Comics history adds much complexity to his character.

He is absolutely a villain. But similar to a character such as Marvel’s, Thanos, he is a layered individual. Even within his villainous moments, there are borderline rational ideologies. Ra’s Al Ghul is not a character who elicits meaningless violence. Rather, his concepts aim to make meaningful change across the planet, bringing it closer to his idea of a utopia.

Thanks to his use of ancient Lazarus Pits, Ra’s Al Ghul is centuries old. His age has been known to vary from story to story. However, one thing which rarely changes is his perpetual dual with arch nemesis, Batman.

Ra’s Al Ghul is a skilled warrior, and deadly assassin. He also possesses a genius level of intellect and seemingly endless resources and contacts around the world. This makes him an incredible duelling partner for the incomprehensibly skilled, Dark Knight.

Ra’s Al Ghul earns his spot in this list thanks to the complexities of his character, and the multi-dimensional storylines that he can create.

Lex Luthor is one of the smartest and richest characters in the DC universe. That alone should allow him to become one of the most dominant villains across movies, comics and animations. But, similar to Ra’s Al Ghul, the characters ability to adapt and evolve are a big part of what makes him so fantastic to read or watch. Lex Luthor is a bad guy, at least 97% of the time; however, there have been storylines, whether they are by force or by choice, in which Luthor has had to side with the Justice League. Many of these involve storylines featuring Supernatural, alien enemies, such as Darkseid.

Of course, Lex Luthor displays an evergreen hatred of the Man of Steel. Regardless of the storyline or the generation, Luthor can’t tolerate Superman’s otherworldliness. He hates the idea of an alien with the powers of God’s roaming around the Earth. Lex Luthor, at least the ridiculously evil Lex Luthor, will do anything in his power to bring Superman to his knees.

In comic series’ where we see the multiverse come into play, we’re often shown a version of Luthor in which he’s followed a dramatically different life path. Specifically, this occurs in the Crisis on Infinite Earths storyline. Lex Luthor is actually shown as a hero on many different Earth’s. It shows how a character with his brains, determination and power, could ultimately be a great man…if only he was so inclined.

Professor Zoom’s magnificence as a character runs in direct parallel to the often nerfed abilities of The Flash. The Flash, specifically the movies and TV Show iterations, often has his powers whittled down to allow for more cohesive storylines. The fact of the matter is that if The Flash didn’t do stupid things, or lose concentration, there’s barely a hero or villain alive who can beat him; the guy is just too fast.

That’s where Zoom comes in.

Professor Zoom (also known as Eobard Thawne and Reverse Flash) is The Flash’s greatest nemesis. As one of his names would suggest, he is the reverse of everything the scarlet speedster stands for. This tug of war, with opponents of fairly equal abilities, makes for a tremendous spectacle. Just like The Flash, Zoom is capable of harnessing the speed force, even manipulating it to his will. Often he uses this to attempt to destroy the life of Barry Allen.

Professor Zoom is from the future, so he’s often the most intelligent person in the room. Of course, i’m sure Bruce Wayne, Lex Luthor and even Barry Allen would like to have a conversation about that. His future-ness (yes, i’m making that a word) means he often shows extreme contempt for the timeline he finds himself in (this is usually the present day).

To understand how great a character he can be, I would recommend watching Justice League: The Flashpoint Paradox, or reading Flashpoint. It shows a man who is literally willing to let the world be destroyed in order to prove a point.

If you’re unsure who Darkseid is, but you’re familiar with the MCU, think of Thanos on steroids with lasers coming out of his eyes. In essence, Darkseid is one scary dude. He is the tyrant ruler of a planet named Apokolips and he has a penchant for destroying planets in his attempt to eliminate hope and free will from sentient life.

With his extraordinary strength and powers, Darkseid works perfectly as one of Superman’s greatest foes. However, more often than not, Darkseid has been known to take on the entire Justice League.

Darkseid is virtually indestructible. He has super strength and endurance, as well as the ability to fly. Most potently, his Omega Beams are one of the galaxies most destructive weapons. Few have ever avoided, or survived impact from his course correcting eye lasers.

Of course, you need more than just enormous strength to make it to the top of this list. That’s where Darkseid’s brilliant tactical mind and genius-level intellect come into play. There have been many times where Darkseid has actually outsmarted the Justice League, going very close to bringing them to their knees. His constant ability to subvert the Justice League’s strength and show his dominance is something that no other villain has been able to successfully do.

While characters like Lex Luthor, Joker and Ra’s Al Ghul are able to provide more grounded and deceptively brilliant storylines, if you’re on the lookout for a mega-threat to the Justice League and the world, Darkseid is your guy.

It probably won’t come as a great surprise to see the Joker at the top of this list. Frankly, i’d be surprised if any similar list didn’t have the Clown Prince of Crime in position #1. The reason for that is pretty simple. No other villain, across any medium, has produced as consistently amazing storylines as the prodigiously unpredictable Joker.

Unlike a character like Darkseid, who is magnificently powerful, the Joker’s greatest power comes in his complete and utter disdain for normality of any kind. The Joker’s greatest foe is Batman. That is axiomatic. However, Batman is the world’s greatest detective. Batman often relies on his understanding of criminals and his ability to read people in order to solve many of his crimes. This is why the Joker is so powerful. How can you read a villain, when the villain doesn’t even know what they’re going to do?

Your favourite version of the Joker will largely depend on your preferred method of indulging in these stories. For many fans, more towards the casual end of the spectrum, they will be familiar with the character through Heath Ledger’s portrayal in the 2008 film, The Dark Knight. More recently, Joaquin Phoenix produced a version of the villain that was slightly more detached from reality – although it was wildly well received by critics and fans.

Hardcore fans will be familiar with the intensity of the comic book iterations, as well as notable appearance through the 90’s in animate TV shows such as, Batman: The Animated Series.

The point is, however you decide to watch or read, the Joker’s evil prowess and inexcusably deplorable and unpredictable actions make him a villain that will keep you on the edge of your seat. At the end of the day, that’s why we seek out stories – we want to be enthralled and captivated. That’s why there’s no doubt that of all DC villains, great or small, the Joker is undoubtedly the greatest.

Who makes the cut in your list of the Greatest Ever DC Villains? Let us know in the comments below.