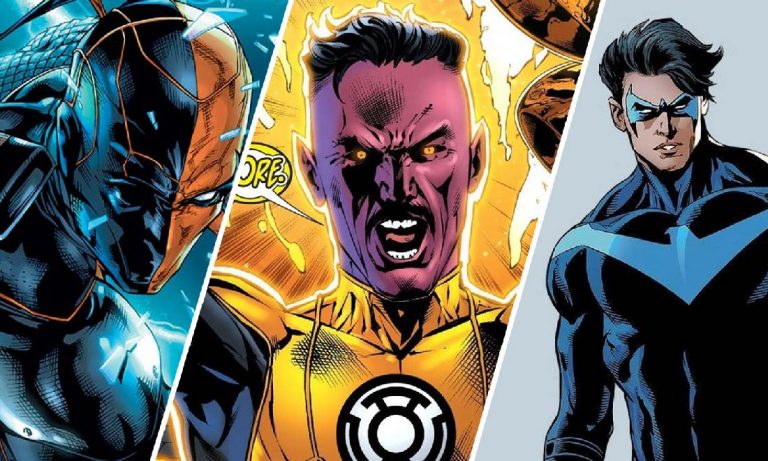 5 Heroes & Villains We’d Love To See In The DCEU

After a few forgettable years, the DCEU is beginning to look a lot healthier. For the first time since its inception, the extended DC Universe appears to know what direction it wants to head. For years, fans have been left bitterly disappointed by a string of movies which can generously be described as ‘flops’. Justice League and Suicide Squad were so bad Warner Brothers have decided to pretend the don’t exist, although they were late to the party, as the rest of us have been doing that since they were released.

Looking forward, there seems to be a whole lot of fun to come. The Flash, Aquaman 2, The Suicide Squad & Shazam 2 could all be good films that help propel the DCEU in the right direction.

Despite the improved outlook, there’s still a few holes in the DCEU that could be patched by introducing some of these long-standing DC characters. Here, we take a look at the ‘5 Heroes & Villains We’d Love To See In The DCEU’.

Even when you take into account the presence of Batman and the cast of Birds of Prey, the DCEU has an over-abundance of high-powered superheroes. Superman, Aquaman, Wonder Woman, Flash, Shazam & Cyborg are incredibly powerful beings. This isn’t necessarily a bad thing, it’s just that the history of DC films prove that the more grounded characters correlate to the better movies.

This is why Green Arrow seems like a logical choice to be brought into the expanded DC Universe. Green Arrow has never been a one-dimensional character. In fact, the most recent live-action iteration is a remarkably different beast to the one that comic book fans would be familiar with. A common opinion is that the CW’s ‘Arrow’ was just a cheap rip-off of Batman. In some respects, this is a valid argument, but the show also revealed a grittier and far cooler version of the Green Arrow that could easily make the jump into the DCEU.

Green Arrow’s presence would also help share the load of Batman’s heavy Rogues Gallery. This would allow the Caped Crusader to focus on the likes of Joker, Ra’s al Ghul, Riddler & Two-Face, while Green Arrow squares off against Deathstroke, Merlyn & Deadshot.

The Green Lantern Corps has already been alluded to in the Justice League film. It’s believed that Zack Snyder will go deeper into this story when his cut of Justice League is released later this year. However, it seems unlikely that the film will go so far as to introduce Hal Jordan or John Stewart.

Green Lantern obviously had it’s shot at a live-action franchise in 2011 when Hal Jordan was depicted by Ryan Reynolds. The movie bombed, with many feeling the characters reliance on CGI was a major contributor. But technology has rapidly evolved in the 10 years since Green Lantern was released and it may be time for Hal Jordan to power up his ring one more time.

Green Lantern would fit seamlessly into the Justice League squadron that the DCEU has assembled. It would also allow them to explore some storylines in which Superman goes rogue, as he’s one of the few characters able to put up a fight against the Man of Steel.

Nightwing is the adult version of Batman’s very first sidekick, Dick Grayson. After moving into adulthood and having some rough years alongside Batman, Dick decides to spread his (night)wings and fly. Nightwing becomes a menacing vigilante in his own right, tackling the darkened, crime-infested streets with the same vigour as The Dark Knight.

For Nightwing to enter the DCEU, it would require a serious retcon or a multiverse situation. In recent times, Zack Snyder has stated that the Robin murdered at the hands of the Joker was none other than Dick Grayson, rather than Jason Todd. A strange choice, and one that seems to be for no other reason than person preference (geez, what did Dick ever do to you, Zack?).

Ideally, if Nightwing were to ever enter the DCEU, it would need to be apart of a Batman Family film. This would allow Nightwing, Red Hood & Batgirl to feature in one central film, without needing their own separate movies.

Swamp Thing is a complicated fellow. He is certainly a good character, most of the time. Although he probably falls closer to the anti-hero variety.

Swamp Thing is a humanoid, elemental creature, whose home is, you guessed it, in a swamp. He generally fights to protect his home, and harbours a deep love of all natural/environmental things. For obvious reasons, the character can often get pigeonholed into very specific storylines, however, 50 years of comic book history provides numerous wonderful storylines that could easily be adapted into an enthralling live-action film.

Hawkgirl is a seriously underrated character throughout the DC lore. If you’re unfamiliar with who she is, she has the ability to fly, has super-human strength and advanced combat skills. She’s generally closely associated with Hawkman, who often portrays her romantic partner. The best example of how much Hawkgirl can bring to a Justice League story is through her portrayal in the fantastic Justice League Unlimited series. She is not even slightly out of place in a AAA+ Justice League squad.

Hawkgirl has had a few different identities, but more recently has gone by the name Kendra Saunders. Her history has been somewhat muddled through so many different versions of the character. This isn’t always a bad thing, as it allows for some creative input that doesn’t automatically put hard core fans offside.

I know what you’re thinking. “Deathstroke is already in the DCEU”. Well, he appeared in a Justice League after credits scene, but thanks to the general suckiness of that movie, it’s unlikely to progress much further than that. Although, Zack Snyder’s Justice League will be premiering on HBO Max this year, so you never know what may be in store for the DCEU’s, Slade Wilson (portrayed by Joe Manganiello).

Deathstroke is arguable one of the best villains in the DC comics universe. He often plays the antagonist to Batman’s activities, thanks to his characters more grounded realism. However, just because he doesn’t have any superpowers, doesn’t mean he isn’t capable of going toe-to-toe with the big dogs of the DC universe.

Notably, Deathstroke was played by Manu Bennett in Arrow. A role in which the character and actor received critical acclaim. His presence correspondent to Arrow’s best season and many of it’s best all-round episode – something which is hardly a coincidence.

A Deathstroke-led movie, whether he’s portrayed as a anti-hero or a villain, is something I want to watch.

Red Hood is one of the best modern day Batman & DC characters. Red Hood is an alias for Jason Todd, one of Batman’s former proteges. Jason was killed by the Joker, only to be resurrected in the Lazarus Pit by Ra’s al Ghul. The result led Jason to go temporarily insane in the short-term, and to become murderous in the long-term, although his targets are often bad guys.

Batman and Red Hood already have a storied history, despite the characters relatively young history. Often they do not see eye-to-eye; however, Batman has also leaned on the Red Hood for help during some of the more arduous missions. Their mostly bitter and violent relationship is what lands Red Hood in the “Villain” column.

If WB & DC are to expand the Batman mythology through their numerous iterations of the character, the Red Hood storyline would be a great place to start.

Professor Zoom (aka, Reverse Flash) is the Flash’s central foe and one of DC’s best villains. He’s generally the antagonist in many of Flash’s best storylines, including “Flashpoint”, which is one of the greatest DC storylines ever.

Zoom’s abilities mirror those of the Flash; however, his ideologies and philosophies differ entirely. Zoom is from the future and was an radical admirer of The Flash. He replicated the experiment that gave The Flash his powers, routinely travel to the past to try and kill his arch-nemesis, or at the least, ruin his life

There are currently few details about The Flash film, but one would expect that The Flash’s greatest foe will appear or at least get a mention in the upcoming movie. Professor Zoom could be a great future antagonist for the whole of the DCEU.

Sinestro is Green Lantern’s greatest foe. You may remember the character appearing as the central antagonist in the forgettable 2011 film, Green Lantern, starring Ryan Reynolds.

One would imagine if the Green Lantern movie will ever come to fruition, Sinestro will be ahead of the pack to show up as the dominant villain.

Ra’s al Ghul is the leader of the League of Assassins. You may remember Liam Neeson’s memorable performance as the character in the 2005 film, Batman Begins. Additionally, he was portrayed by Matt Noble during Arrow’s 3rd season, although this wasn’t held to the same critical acclaim.

Ra’s is one of Batman’s greatest foes, but can often be paired off against other Justice League members due to his status as something of a legendary figure. “The Head of the Demon”, as he’s often referred, maintains his status and lifespan by bathing in the mystical waters of the Lazarus Pit. The pit returns Ra’s youthful body and allows him to prolong his life. His age varies depending on the story, but is generally accepted that he’s many centuries old.

Due to Batman’s (Ben Affleck’s iteration) age in the current DCEU, one would have to assume he’s come into contact with Ra’s. It seems unlikely that Affleck will continue in this role, but if he did, Ra’s would not appear out of place at all.

More likely, it would appear that the Multiverse opportunities that should be opened up in the upcoming Flash film may allow Robert Pattinson’s, Batman, to cross into the DCEU. If this happens, we may be able to press restart on the Batman villain possibilities.