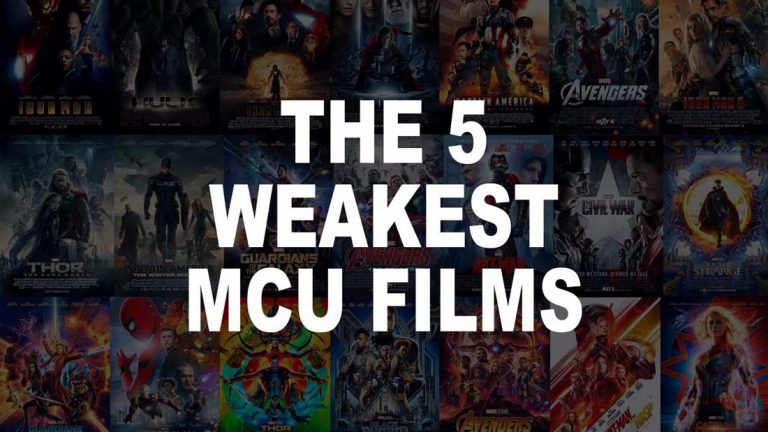 When we talk about the MCU, it’s often in a very positive sense. This isn’t surprising as we’re comic book fans and the MCU is mostly superb. But every now and then the MCU will throw up a movie that just can’t compete with some of their bigger projects. It’s hard to be critical. After all, their strike rate after 23 films is phenomenal.

Still, looking at the lowlights allow us to realise how special so much of the franchise really is. In this article, we’ll be looking at the 5 weakest movies that the MCU has produced. Movies will not be ranked by popular opinion (i.e. Rotten Tomatoes, IMDb or Metacritic scores). Instead, they will be ranked based on overall quality, writing, depth of plot holes & enjoyment.

I can imagine this will be highly controversial. After all, everyone loves the friendly neighbourhood Spider-Man. As a matter of fact, so do I. It’s just that Spider-Man: Far From Home wasn’t very good. I can certainly see what they were trying to accomplish. We see a young man who has only recently lost a father figure (and quite possibly the 2nd or 3rd time this has happened) and who simply wants to be a kid. But due to his special abilities, he’ doesn’t have that luxury. Unfortunately, the films efforts to reach us on an emotional level fall a little flat and position Peter as a young man with questionable decision making skills.

From a story perspective, the movie fails on a bunch of different levels. Let’s start with the glasses. Are we expected to believe that a Country like America would:
a). Allow Tony Stark to create EDITH in the first place;
b). Allow a teenager to control multi-billion dollar, military grade technology that has the capabilities of killing a bus full of children with a single command?

Uh, no, that’s ridiculous. Additionally, and this is my biggest gripe, EDITH should have known exactly who Quentin Beck truly was. Even assuming EDITH doesn’t have the same programming logic as JARVIS, and able to make judgement calls or infer information, you would imagine someone like Tony Stark, who’s ability to plan ahead is legendary, would have created some sort of in-depth warning system.

Finally, the villain just wasn’t believable enough. This is not a blight on Jake Gyllenhaal’s performance. He was the starring light from this film and I’m genuinely saddened that the original Mysterio isn’t a true superhero. Rather, my issue is that the technology they use, and the illusions they create are just a little too far fetched. Even for incredibly smart drones, it all just feels a bit too perfect. I’m also unclear how Mysterio planned on being a Superhero moving forward when he wouldn’t be able to plan for the “Avengers-level” threats that seem to pop up every 2-3 years.

Iron Man 3 is another movie that attempts to reach us on an emotional level. As Tony Stark begins to feel the psychological ramifications of his years of superhero antics he begins to question who he is beyond the suit. This kind of dramatic edge can often engage a directors pure creativity, but unfortunately Iron Man 3 suffers from a choppy pace and villains who just never appeal to use on any kind of fundamental level.

By the time Iron Man 3 was released, we had already seen Tony Stark in 3 different MCU movies (Iron Man, Iron Man 2 & Avengers). So, the bad guy (or good guy) being pissed at the mercurial genius was a plot device that had already been hammered to death. Nevertheless, this is what we got from our villain when Aldrich Killian came for Tony Stark.

Just like most, if not all MCU movies, Iron Man 3 is not a bad film. Iron Man 3 simply suffers from some fundamental flaws that tend to drag down any film with a character that is already cinematically well-established.

Due to some comments made prior to the release of Captain Marvel, there was an online review bombing campaign that hurt this film’s premiere. Of course, none of those things meant anything to me, as I hadn’t even read the comments, nor taken notice of the review-bombing campaign, prior to seeing the film.

Where I felt the movie fell flat was it came across as a story that didn’t need to be told. At the very least, assuming that it DID need to be told, it felt as though it was thrown together simply to satisfy the need for an origin tale.

The same as the majority of the films in this list, there are elements of Captain Marvel that I enjoyed. The 90’s retro-vibe was a very nice change of pace. Outside of ‘Captain America: The First Avenger’, every MCU story prior to Captain Marvel had taken place in the present day. Additionally, Samuel Jackson & Brie Larson shared a strong on-screen chemistry that helped push the film forward.

But ultimately, I left the film with a feeling of…”Yeah, okay?”. And that’s never a great sign for any movie.

Iron Man 2 was the sequel to the movie that started everything for the MCU. 2008’s Iron Man was such a success that both Robert Downey Jr’s & Marvel’s worlds would never be the same again. However, 2010’s Iron Man 2 was not as well received as its predecessor.

It’s hard to pinpoint exactly what went wrong for Iron Man 2 because there were certainly some highlights. The film introduced us to Scarlett Johansson’s awesome Black Widow character. It also gave us the first team up of Iron Man and Warmachine (later renamed Iron Patriot).

The concept of Iron Man taking on the US Government was a bit of a snooze-fest. Equally boring was Mickey Rourke’s, Whiplash. The character, and his backstory, were just so dull. Sometimes fans need and deserve something a little more than, “he did something bad to me, now he must die”.

Finally we make it to what we consider to be the weakest of the MCU films. This is something which appears to be a universal fact, as you’re unlikely to find someone willing to rave about ‘Thor: The Dark World’.

Unlike Iron Man 2, it’s not that hard to distinguish what went wrong with this film. ‘Thor: The Dark World’ just didn’t strike the right balance between magic, science and entertainment. In fairness to the films director, this was released in a time before the MCU had found its feet with it’s balance between humour, drama & action.

Thor’s character, although truer to the comics, didn’t resonate with fans when placed in a solo film. It wasn’t until Taika Waititi took hold of ‘Thor: Ragnarok’ that we saw a version of the Norse Character that appealed to the wider public.

The inclusion of a weird race of mystical dark elves, along with a kinda gross storyline built around an Infinity Stone/Goo (Aether) also didn’t help the films appeal.

Do you agree with this list? What are your choices for the MCU’s 5 Weakest Films?