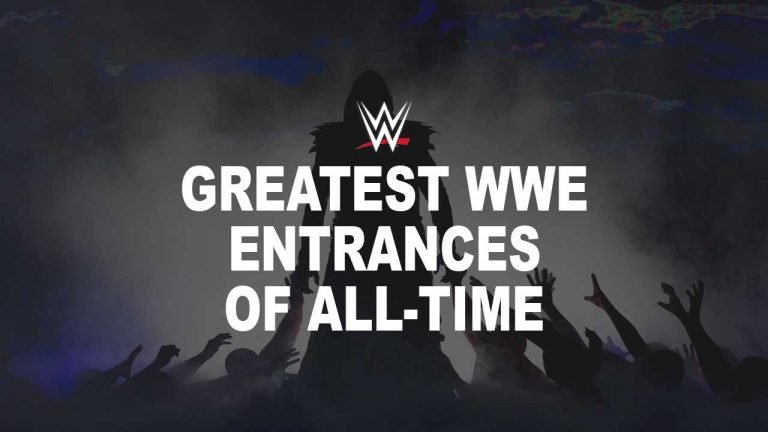 WWE is the biggest wrestling entertainment business on the planet. Because of this, they have access to the world’s best performers, entertainers and writers. Whether they always utilise this capability is of course a different question. But throughout the years, they’ve shown repeatedly that their production teams have the ability to drive the businesses entertainment capacity through the roof. There is no better example of this then when a great superstar has a truly awesome entrance theme. There have been so many good ones throughout the years, but we’ve gone through and picked out those which can truly be considered the Best WWE Entrances Of All-Time.

Try and think of Edge’s theme song and entrance pyro without singing the above line in your head. Seriously, try it.

The famous, “You think you know me” line has been apart of Edge’s entrance since his early days of teaming with Christian. But the introduction of Alter Bridge’s “Metalingus” was the cherry on top of the already super delicious cake. What we now have is one of the best theme songs to have every graced WWE television.

The above video, highlighted by his unexpected return to the WWE after 9 years, is an example of how his entrance can lift the lid off any arena.

Stone Cold Steve Austin is arguably the biggest name to ever step foot inside the WWE. His reign of Top Dog allowed the WWE (formally WWF) to prevail over WCW in the Monday night wars of the mid-90’s. Whilst Austin’s hard nosed character is to thank for his success, his awesome entrance theme was always capable of sending any crowd into raptures.

Kane’s entrance starts off with a bang. Literally. As the entire arena looks like it’s being set on fire, Kane stars to make his way down to the ring.

Kane’s character and entrance has gone through modifications during the years. When he first debuted, his theme was more reminiscent of Undertaker’s with a long, drawn out darkness, followed by his customary flames. As the years went on, the entrance became much more instantaneous, and we think that’s for the better.

His best entrance was around 2003-2005. It was a time where he was going through a psychotic experience after removing his famous mask. Both his character and his entrance music prospered during this time.

It’s hard to leave The People’s Champion off of any WWE list. The Brahma Bull has one of the most iconic entrances off all-time. Along with Stone Cold, The Rock revolutionised modern wrestling. They took the concept of a wrestling promotion and produced the kind of in-your-face attitude that turned Vince McMahon into a billionaire.

The Rock’s anthem always starts with the famous, “If you smell, what the rock…is cooking”. Just like Austin’s his entrance music has had several variations throughout the years, but has always possessed the same rhythm and upbeat tempo like gets your heart racing. His return to the WWE after years away still brings goosebumps.

Triple H is one of the most successful wrestlers to ever exist. The 14 time world champion is known as The Game…and game is most certainly what he brings every time his music hits. ‘The Game’ by Motorhead, creates the perfect synergy with Triple H’s in ring persona. The song was created specifically for him and fits him to a T.

At his peak and during his most popular moments, Triple H’s music was capable of deafening any stadium or arena. The above entrance video is the perfect example of this.

Ladies and Gentleman, the WWE’s first and only olympic champion, Kurt Angle. If it wasn’t for a mid-career shift to TNA, and a self-admitted addiction to pain killers, Kurt Angle would go down in history as one of the greatest WWE superstars and athletes ever. Even as it stands, he is undoubtedly a legend and as close to the top tier as you can get.

His American-themed entrance has always been the same; and thank god for that. It’s awesome and really builds the hype for what’s about to happen.

The only slight modification to the theme happened during an early 2000’s feud with Edge. As Kurt Angle was a heel at the time, Edge prompted the crowd to begin chanting “You Suck” during the middle stages of his entrance. To say it stuck is perhaps not doing credit to the definition of the phrase. For the next 18 years, crowds have chanted it non stop during Angle’s entrance. Whilst he originally hated it, he has grown to love it over time. Nowadays it is seen as a sign of perpetual adulation.

The Heart Break Kid, Shawn Michaels, had a wonderful career full of blistering highs and earth shattering lows. But no matter what stage of his career he was at, HBK was capable of wowing the audience. His entrance from Wrestlemania XII shows just how much of an entertainer the man could be.

His entrance overall has always been very memorable. His grand entrance at Wrestlemania 25 is another that will always remain in our memories.

The Hardy Boys are one of, if not the, most popular tag teams of all-time. Known for the high-flying abilities and daredevil attitudes, the Hardy’s, along with the Dudley’s and Edge & Christian, revolutionised the tag team division during the attitude era.

The Hardy Boys entrance, which is the same as Team Xtreme’s entrance (when Lita was a member) was a fitting high-intensity introduction to an extremely exciting team.

Shinsuke Nakamura is a guy that knows style. His entrance shows this in droves. Each time he comes to the ring it’s a lesson in being cool and getting the crowd pumped.

He has been given a few small WWE pushes without really making it big. If the WWE ever decide to send this guys character to the stratosphere, his theme will definitely help with his aura.

There’s not much I can say about The Undertaker that hasn’t already been said. The man is a legend and one of the biggest icons the business has ever seen. His career has almost stretched 30 years at this point and he has done it all.

Personally, I’ve never been a massive fan of The Undertaker’s theme. Mostly because in the days he was on weekly TV, it felt like it took an hour for him to get to the ring. With that being said, there is no doubting how intense and awe-inspiring his entrance could be.

The dark lighting, the smoke, the fake lightning…it all made for a pretty cool experience.

As a side note, I was also a massive fan of his “Rollin'” theme by Limp Bizkit, in the early 2000’s. The American Badass persona is severely underrated.

The stables entrance was epic and fitting the groups image. The above video shows their return to WWE in 2018, showing that the crowd still respects the group immensely after all these years.