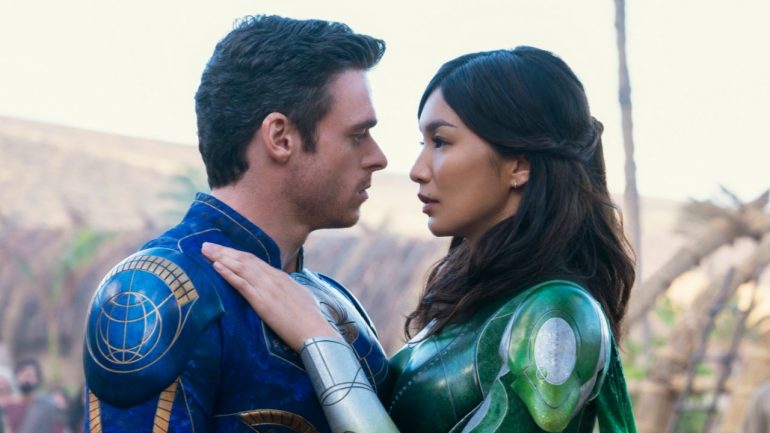 **SPOILER WARNING – we’ll be dropping all kinds of Eternals spoilers in this review. If you’re yet to see the film and don’t wish for it to be spoiled, please look away**

Well, Eternals has finally hit cinemas and we’ve now received the latest entry into the MCU. Eternals takes us, with Star Wars-like scroll text, to the beginning of the MCU’s version of the universe. It’s here that we learn that before the singularity created the 6 elemental crystals (Infinity Stones), there lived Celestials. These Celestials were responsible for the creation of suns, solar systems and galaxies.

The scroll text helps, but is otherwise unnecessary, as the film ends up telling us all this stuff again, anyway. In saying that, I enjoyed that they provided us with a different way of building into a film. Especially one with as much detail and confusing backstory as the Celestials and Eternals.

Eternals was directed by Oscar and Golden Globe winning director, Chloe Zhao. Chloe Zhao has been a critically revered director for some years now, and it was believed that she would be able to bring Eternals to life with her skills. Unfortunately for all of us, the MCU is just too powerful a formulaic juggernaut to stop. We’ve seen it for years, the inability to present these films as anything other than a copy/paste. In the case of Eternals, it suffered the same fate as every Marvel film of late – predictability.

The film actually toed the line of spirited conversation and existential questioning. At one point, the Eternals must decide whether the fate of one group of peoples was more important than the fate of even more, yet to be born people. It threatened to dig deeply into the moral, ethical and ideological questions that have often hid under a bed when the MCU is in town. However, the film, to all of our dissatisfaction, stayed the course.

As the title of our review suggests, I actually found Eternals to be a fun and spirited film. I thoroughly enjoyed sitting in the theatre and watching it. However, in the context of the MCU, and just as a film in general, would I say it was a good film? No, I would not.

This isn’t intended the stinging barb it seems. Afterall, Eternals has many strong elements, including characters, setting & backstory. However, when pieced together, the film comes across as disjointed and uneven.

I want to take a step back and tell you about the elements of the film I really enjoyed. First and foremost, I enjoyed the characters, although I didn’t find myself connecting with them.

Kingo, Druig, Phastos, Gilgamesh and Makkari were my personal favourites. Kingo, played by Kumail Nanjiani, brought the comic relief with which Marvel movies are now synonymous. Meanwhile Makkari, played by Lauren Ridloff, despite being deaf, was one of the more expressive characters in the whole film.

I didn’t dislike the other characters. However, I felt the characters of Ajak, Thena, Ikaris & Sersi were a bit too wooden. It meant I struggled to develop any real attachment.

Sprite had her moments of fun and heroism (and villainy), although I can’t for the life of me understand why a Celestial would make one of their Eternals half the size of the others.

The problem with the Eternals characters lives in their immortality and non-humanness (yes, I’m saying that’s a word). It’s just so hard to become emotionally invested in characters you have literally nothing in common with. These super-beings are of a different planet, can do remarkable things, and live forever. With the exception of being an alien in most rooms, I can’t relate to any of these.

Additionally, the extended roster means that few of the characters are afforded more than mere minutes of screentime. It’s a critique of all teamup films, however, it rears it’s ugly head further when the film you’re watching is an origin story.

This lack of character development and emotional resonance has become something of a problem with the MCU of late. I’m unsure how to fix it, but perhaps they need to get back to basics. Focus less on the CGI-driven fights and more on the people fighting them. I’d love to dig deeper into the personalities of these new characters, but the films just aren’t given us the chance.

It’s well documented that the MCU has a major villain issue. I don’t know whether they can’t, or just refuse to write good villains, but it’s become a factor once again in this latest outing.

You could make the argument that perhaps the MCU didn’t want to use up a major villain fighting a team of immortal warriors. That would be a fair point, as well. But it doesn’t change the fact that the absence of one ruins what could be a good movie.

Towards the back end of the film (and again, major spoilers), we’re presented with a villain in the form of one of our main protagonists, Ikarus. However, it feels like less of a narrative subversion, and more like the writers just changed their minds halfway through the story.

As the film comes to a conclusion, the team splits into groups. There’s team “I want to save the Earth”, team “I want to help the Celestials”, and team “I’m Kingo and I’m not having a bar of any of this”.

There was, of course, a deviant who was slowly developing into some kind of super predator. Throughout the film, it stole the life-force of Ajak &Gilgamesh, which made it incredible strong and seemingly, unstoppable.

However, the narrative just sort of forgot about the creature, only for the deviant to show up at the end of the film and be unceremoniously killed by Thena. It’s this sort of sloppy writing which draws my attention away from the screen and towards my watch to figure out what time the movie will end.

I Don’t Know What Eternals Has Done For The MCU

I don’t know if I’d call this a movie problem, but it’s most certainly an MCU issue. As it currently stands, Phase 4 feels like the beginning of the end for the MCU. Sure, they’re introducing all these new characters, and it is definitely fantastic that the MCU is expanding into more diverse and inclusive areas. However, the more ‘galactic’ stories are just failing to hit the mark.

Since Avengers: Endgame, there has been a flat feeling to the stories coming out of the MCU. I don’t envy the writers. It must be hard to build up the intensity of the universe again after such an almighty high.

Characters such as Arishem, the Celestial at the centre of the Eternals story, are simply too powerful to be genuinely interesting characters. I’m not sure if Marvel’s plans are to use the Celestials as a future mega-battle, but it seems to be shaping that way. The introduction of such characters leaves some of our favourites, like Sam, Bucky, Spider-Man and Hawkeye, out in the cold.

I see bright potential in many of the Eternals characters. Kingo, Sersi, Druig, Phastos and Makkari all have the potential to be interesting MCU characters. However, Marvel needs to be willing to put in the effort to build up these personalities and allow the audiences to grow with them.

If you’re searching for your next fun popcorn film to watch in the cinemas, I would certainly recommend Eternals. You’ll have a two and a half hours – just don’t expect too much. 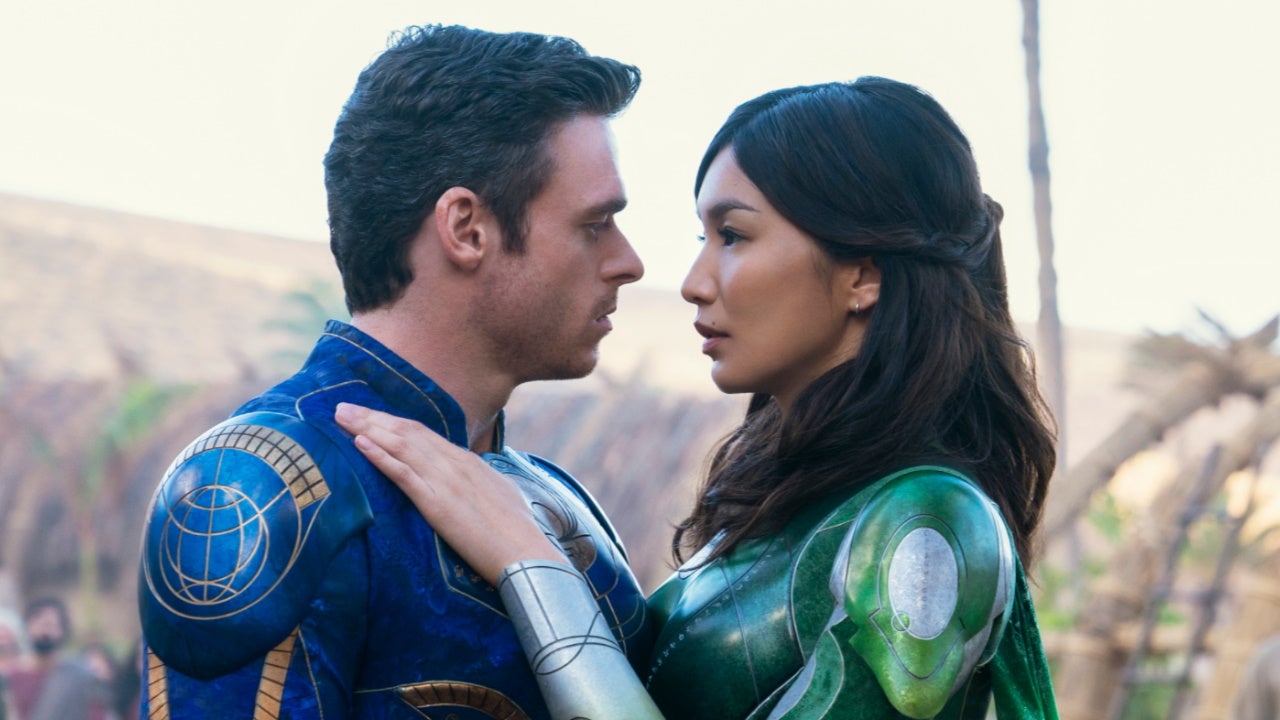 Eternals Review: A Fun, Albeit Disjointed MCU Film
Final Thoughts
Eternals is a fun movie, with some great action sequences. However, the film comes across as disjointed. Often, it appears unsure of what it wants to be and what it wants it's characters to be.
Pros
Fun Characters
Enjoyable History Flashbacks
Asks Interesting Questions
Cons
Under Developed Plot
No Character Relatability
Too Expansive & Grand
70