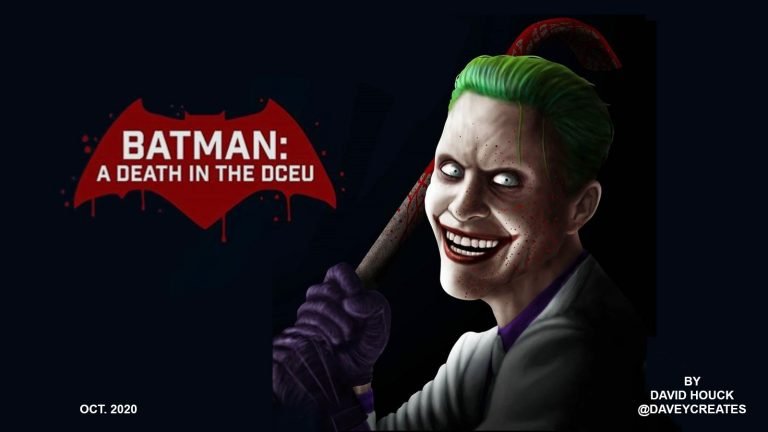 Say what you will about Man of Steel, Batman V Superman: Dawn of Justice & to a lesser extent, Justice League, but the fact is, Zack Snyder had a vision. Unfortunately, his vision for what the DCEU could be was brought to a halt when he was forced to leave production of Justice League. Additionally, Warner Bros. no longer believed in his vision for the future of the DCEU and decided to call an audible. Considering the already extensive world building that had proceeded this decision, it meant that a lot of cool storylines were left on the table. The likes of which we are unlikely to ever see on the big screen.

But not all hope is lost.

Thanks to a very clever, and very talented artist/writer, David Houck, we can get a glimpse into a short story that involves Batman (Ben Affleck’s version) and the Joker (Jared Leto).

The two-page comic strip is called, “Batman: A Death in the DCEU”. It’s a delicious play on words from the famous DC storyline, “Batman: A Death in the Family”, one of DC’s most intense and gripping stories. The comic-strip carries on from what can already be pieced together from scenes throughout Zack Snyder’s DCEU. This includes the obvious death of Robin, as well as the Joker’s infamously mangled teeth.

“Batman: A Death in the DCEU” gives us a glimpse into how Robin’s death was the catalyst for Bruce/Batman’s slide into brutality and vengeance. I don’t know about you, but reading this comic strip makes me want to see this movie *in the Joker’s voice* really, really….bad.

Check out David Houck’s comic strip below. You can also find him on Instagram at @daveycreates

Batman: A Death In The DCEU