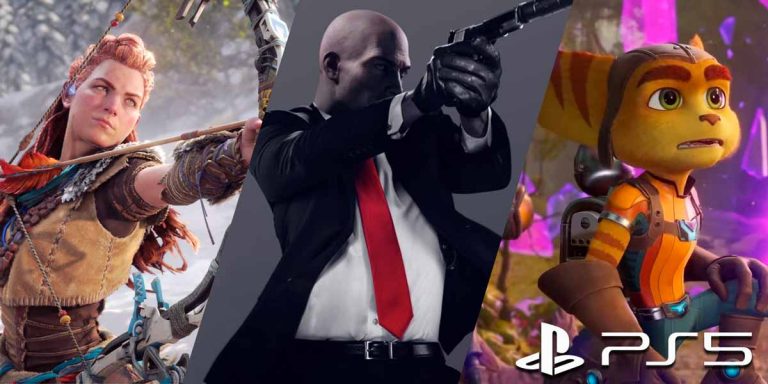 Here Are All The BEST GAMES Coming To The PS5

The PS5 launch is getting closer and closer by the day. The new console from Sony promises a revolutionised approach to gaming, with substantially increased frame rates and some of the fastest loading times we’ve seen in years.

As we pass the time waiting for this hotly anticipated new console, check out our list of ALL the BEST game coming to the PS5.

Players will take on the role of Eivor. Eivor is a fierce Viking Warrior torn between his desire for personal glory and his willingness to help his brother, Sigurd. The endless wars and ever dwindling resources have driven Eivor’s clan from their home in Norway. They must find their place and secure their future amongst the broken rule of England’s land. Throughout their journey, Eivor’s clan will face powerful Kings and warmongering rulers.

To say that Harry Potter fans are excited for this game would perhaps be the understatement of the century. Hogwarts Legacy will be an RPG that takes players on a magical journey around the most famous school in Wizardry. The story will take place in the 1800’s (long before Harry Potter). You are a student who holds the key to an ancient secret and the one who will make the ultimate decision of whether to use it for good or bad.

I won’t lie, although I was pretty pumped watching the trailer for the next edition to the Spider-Man game franchise, Gran Turismo 7 was the first trailer that made me sit up and go, “daaaamn”. The graphics in this title look incredible and i’m super keen to grab a copy, strap on my seatbelt and start pumping out some laps. Not a huge amount of info about this game yet, but many are pointing to a late 2020 launch.

Developed by Treyarch and Raven Software and published by Activision, ‘Call of Duty: Black Ops Cold War’ will be the 6th title in the ‘Black Ops’ series. A gripping single player campaign will bring you face-to-face with historical figures, and force you to swallow some hard truths. Players will battle around the globe in the search for freedom and peace.

Gotham Knights takes place in a world after the apparent death of Batman. The game will feature playable characters such as Nightwing, Batgirl, Robin and Red Hood.

From what we can tell, ‘Suicide Squad: Kill The Justice League’ will focus on the Suicide Squad up against a rogue Justice League. Amanda Waller has tasked the unlikely group of miscreants with the ‘suicidal’ task of killing the World’s most powerful beings.

The Rocksteady production team has now told us that this game will be co-op enabled, but also able to be played in a single player format. They have stated that Metropolis (the setting for the game and Superman’s home city) will essentially act as a “5th character” due to it’s open world format.

At the risk of expressing my opinion too much, this one probably isn’t on my list of “must play” games. However, this is absolutely no fault of the production & development team. From a graphics and gameplay point of view, Ratchet & Clank: Rift Apart, looks mighty impressive. Have a watch of the trailer above and find out why so many people are talking about this game.

Project Athia was probably the most visually striking of all the games we saw during the PlayStation event. The environment and graphics look incredible! Once we have that PS5 controller in our hands, we can just imagine how great the haptic feedback and 3D sound is going to be emanating from that controller. Project Athia was more of a teaser than an actual trailer, so it’s still expected to be some time away.

For those of you hoping to one day play an entire game as a cat, here is your chance. Stray is a game where you must traverse a world as a cute little feline, solving puzzles and untangling ancient mysteries to try and find your way home. This seems pretty realistic, i’m fairly certain my cat does the same thing every day.

Seeing a sports franchise make the list wasn’t overly surprising since they get rolled out every year. But still, it was nice to get a 1080p glimpse of what a 2K game might look like in 4K. Despite the limitations of what YouTube was able to show, and the fact most of the trailer was cinematics, the graphics look pretty slick and i’m definitely looking forward to throwing down some 3’s come late 2020.

Returnal looks like your classic storyline. Get lost in space, crash land on an alien planet, get attacked by monsters. It’s happened to all of us. Yet, i’m still pretty pumped to give this one a go, because it looks like a lot of care and attention to detail has been added. If you’re into intense Sci-fi games, then you’re going to want to chuck this one at the top of your list.

A small step back in intensity, we have Sackboy: A Big Adventure. This one could be a lot of fun, and the game allows you to go about the journey solo, or team up with friends for a little co-op play. Either way, it could be a good way to burn a few hours when the PS5 finally reaches stores.

This one looks like Fuzion Frenzy, Rocket League & Gran Turismo all rolled into one. Destruction Allstars is an edge-of-your-seat driving game with a dangerous twist.

I got major Zelda vibes from this game, only with slightly better graphics. It looks like an amazing adventure game and i’m super pumped to play it. Throughout the game, players will grow a team of companions to join them along your journey. You must fight and explore as you traverse the spectacular and immersive world.

A narrative adventure about an end of an era and the start of a love-story. Goodbye Volcano High is probably in the niche category, but I can still see many people getting involved and loving this game.

A relatively dark and intense looking trailer should have many people pumped for Oddworld: Soulstorm. The game has been in development for quite some time and will finally find it’s place on the PS5.

Set in a futuristic Tokyo that has been overrun by supernatural forces, Ghostwire: Tokyo looks to be an incredibly immersive and deep action/adventure game. The gameplay appears to be a mixture of realistic environments and cartoonish special effects, which actually could turn out to be a great mixture. I’ll be keenly observing the initial reviews for this game.

Hard to make a lot from this trailer, but if my understanding of classic science fiction is anything to go by, here’s how i think the game will progress. The initial world has been blown to bits by some sort of apocalyptic event. Our protagonist bails to a space ship and goes into hibernation for many, many years. When we reach a new planet, it seems hope has been restored….until we realise there’s monsters about *da da daaaaaa*. We’ll just have to wait and see if i’m right.

Godfall will be an action/adventure game with intensive melee fighting. As you traverse the world, you’ll encounter increasingly dangerous enemies. To counter these enemies, your character must unlock Godlike armour and weaponry.

Not a whole heap that I can add to this one besides what the YouTube video has in it’s description…so i’ll just quote that.

When this one came onto the screen, myself and the millions of other people watching got pretty damn excited. Hitman 3 will the conclusion to “The World of Assassination” trilogy. Agent 47 must take on his most epic and dangerous mission yet. This is going to be a can’t miss game.

Astro’s Playroom doesn’t have quite the intensity of Hitman 3, but it still looks like a fun adventure. The game, which seems to be mostly focused on kids, will come pre-loaded on the PS5 and allows players to go on a fun, adventure-filled journey. The game will be a sort of tutorial for the new DualSense controller, as it will tap into each of the new features.

Little Devil Inside will take place in a “semi-open” world and will allow players to interact with the unique environment. You’ll be able to explore, fight, hunt & more.

Bugsnax invites players to join the creature with the weird Aussie accent to the Island of Snaktooth. Here’s the info from the official Bugsnax website.

“Invited by intrepid explorer Elizabert Megafig, you arrive to discover your host nowhere to be found, her camp in shambles, and her followers scattered across the island alone… and hungry! It’s up to you to solve the mysteries of Snaktooth Island: What happened to Lizbert? What are Bugsnax and where do they come from? But most of all, why do they taste SO GOOD?”

This one looks incredibly immersive, with a unique and in-depth action system. Demon Soul’s is a remake of the classic PS1 game. You’ll be able to experience the quality of the original, but with the breathtaking graphics of the PS5.

When i first saw this trailer i got big Fallout vibes from its 1st person view and some aspects of the gameplay and environment. After watching it a second time, i’m still feeling the same way. This first-person shooter from Arkane Lion will release during the 2020 holiday season.

Very little is known about Pragmata besides:

1). It’s in development now and is supposed to launch in 2022.
2). At some point, a dude in a space suit saves a little girl from some sort of anti-gravity incident.

Horizons Forbidden West is the game that has had the most buzz since the PS5 event. The game will continue Aloy’s story as she heads west within a futuristic America. Aloy will face mysterious creatures and intense new threats while traversing this western frontier.