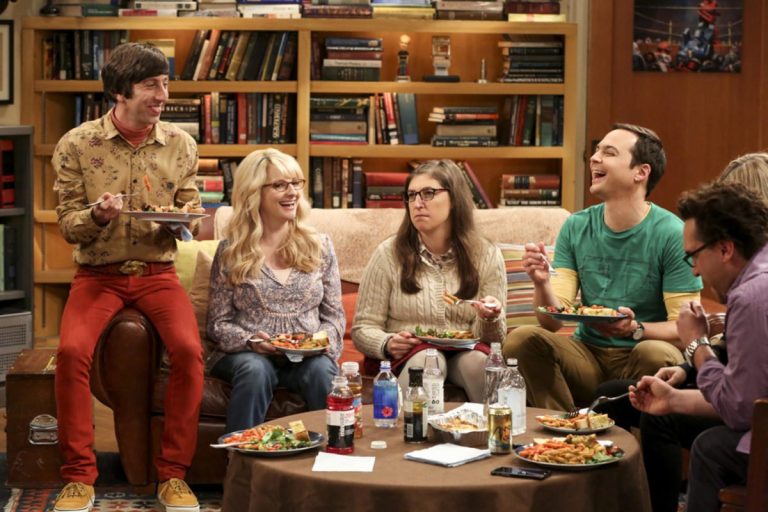 Why The Big Bang Theory Dropped In Quality

I’d like to make one thing clear from the outset: I am not a Big Bang Theory hater. In fact, it’s actually one of my favourite shows. I have it included it my regular TV show binge watching carousel. But it’s hard to argue with the belief that The Big Bang Theory turned into a powder-keg of sitcom cliches and barely funny banter. In this article we’ll be looking at Why The Big Bang Theory Dropped In Quality.

It wasn’t always this way. In fact, I genuinely believe that the first 3 seasons are some of the best sitcom seasons you’ll watch. It was fresh, it was quirky, and most importantly, it was funny. However, 3 seasons out of 12 is not a good ratio and it’s for this reason that I’m writing this article.

Let’s take a look at what occurred that turned the sitcom into a show people grew to loathe.

The series started with the four guys (Leonard, Sheldon, Raj & Howard) and Penny. It was a great dynamic, and it was changed far too quickly.

Bernadette was introduced in Season 3 as Howard’s love interest. She didn’t become a full time cast member until a season later, but as soon as she appeared it marked a considerable change in Howard’s character.

Many would argue that Howard was a creep and his development was a good thing. What those people are forgetting, is that this is a TV show. The characters don’t need to fulfil whatever sense of normality people feel should apply to the show. The characters one goal is to entertain us, and despite best efforts, Howard being in a relationship made him less entertaining.

Amy was introduced as somewhat of a romantic partner for Sheldon. As Sheldon didn’t become romantic until much later, she was more of an intellectual equal early on. I quite enjoyed Amy’s character when she first arrived. She was weird, stiff, arrogant and basically the female version of Sheldon. It was funny and a dynamic that could’ve worked long term.

Sadly, her introduction as a full-time cast member went down the traditional paths. She was quickly “normalised” (we’ll go into detail about this later). As a result, her characters normality began to change Sheldon, who by this stage had become the focal point of the show.

Because this literally occurred to every character on the show, we’re only going to focus on the developments that caused the biggest and most disastrous dynamic changes to the show.

A social recluse who abstained from any former of human contact (intimate or regular) for around 30 years, became kind of…normal as the show went on. Even getting to a point where he began to have a physical relationship with Amy. I don’t know about anyone else, but the idea of Sheldon being a sexual being makes me extremely uncomfortable.

It’s inevitable in any show for characters to develop as people, but i don’t feel that this needs to be a blanket rule. Sheldon’s original character was the primary reason the show became successful, and changing his personality to fit social norms was a bad decision. In my opinion, this was the biggest contributing factor to the downturn of the show.

Leonard didn’t go through one large noticeable change, but many small, subtle ones. When the show started, he was the most normal of the four fellas. He was able to take a joke, kind to his friends and generous to others.

As the seasons continued he became immensely neurotic, vein, and completely unable to take any form of criticism. His character changes actually made him quite unlikeable at certain times.

We touched on this earlier, but Amy’s changes, whilst making her more of a “person”, contributed to Sheldon’s major character changes. As a singular character, she is great. She’s as smart or smarter than everyone else, quirky and witty. But it’s what her introduction did for the dynamic of the show that is the problem.

The writers essentially turned her into a second Bernadette, when that was not even close to what she used to be. Whilst it’s true that people are capable of maturing as people, Amy’s entire personality completely changed.

Her changes then ultimately turned Sheldon into a half-decent person, eliminating a huge amount of humour from the show.

Dialling Down Geek Culture To Make It Palatable For The Masses

In “The Decoupling Fluctuation”, the 2nd episode of season 6, we find Sheldon and Amy in a bookshop, listening to a scientific peer discuss his latest book. They’re mocking him as they find his idea of making physics palatable to the masses ridiculous and a waste of time. Ironically, that’s exactly what The Big Bang Theory did with their writing, as somewhere around season 5-7, they descended on a route that was significantly less focused on…you know, what the main characters have spent their lives doing.

The show became more focused on relationships and ridiculous in-group arguments that would be snuffed out in 15 seconds in the real world. The science and the quick as a whip pop culture references, much like the toys in Leonard’s bedroom, were completely replaced.

Every now and then the writers would throw a softball to those of us who grew with the show, with an episode focused on D&D or Comic Con, but by this point the ship had well and truly sailed.