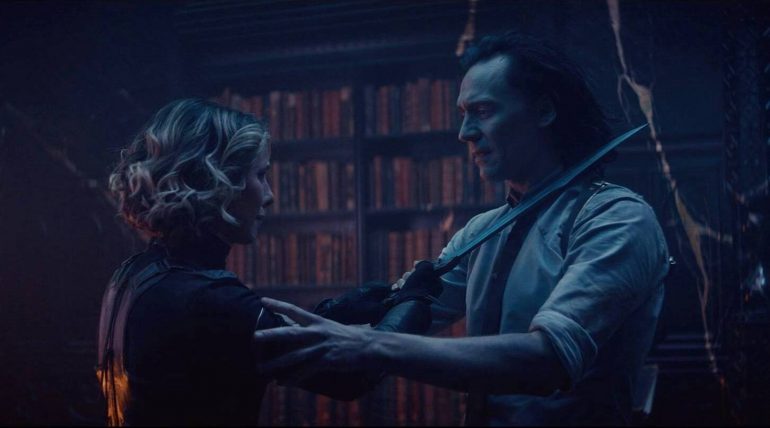 And just like that, Loki (season 1, apparently) has come to an end. The 6 episode season felt too short, and to be honest, there was so much packed in, that I could have used an extra episode or two. But nevertheless, here we are. Let’s try and unpack exactly what transpired in an episode which, frankly, has massive ramifications for the entire MCU.

Right off the bat, I’ll say that I was indifferent to this episode. I didn’t hate it and I didn’t love it. I understand the argument that the show is intended to set up grander things, but it just didn’t hit me in the way I believe they intended it too. That being said, I like the precarious position in which the shows leaves the MCU. It also sets up the possibility for, literally, infinite storylines.

Storywise, Loki and Sylvie finally made their way to the place beyond time. There they found a gothic castle which housed a surprisingly Earthly looking man. Turns out, it’s because he’s just that – a man. No Time Keepers and no godly beings here.

The majority of the episode is a break down of everything Loki and Sylvie (and we, the audience) were yet to learn. It was overwhelmingly insightful, but also super convoluted. The whole episode was essentially a grand set up for season 2, as well as several MCU films.

Sylvie essentially betrays Loki (after the kiss I had dreaded all season) and sends him back to TVA. But as it turns out, it’s not the TVA we all know.

The juxtaposition between Loki and Sylvie’s character development was on full display. Since Loki is coming back for a second season, it’s obviously intended to set these characters up for an even longer story arc.

The episode was enjoyable. It left me wanting more, absolutely. However, in isolation I can’t exactly proclaim it to be the best of the season. Based on the dozens and dozens of reviews I’ve already read, I seem to be in the minority with that. But that’s something I guess I’m just going to have to live with.

Loki’s sixth episode introduces us to the man (or atleast a version of him) who could very well be the MCU’s next big bad. In this episode we met Immortus, a man whose self imposed duty is to protect the ‘sacred timeline’. Believing himself to be the best of all his variants, he uses his knowledge of the Multiverse, and the forces within it, the keep his evil variants at bay. However, when Sylvie plunged her sword into his chest, she opened up a pathway to meeting Kang the Conqueror.

Kang the Conqueror is one of Marvel’s great villains. Kang is looking set to make his MCU debut in Ant-Man and the Wasp: Quantumania.

Jonathan Majors introduced a larger than life version of Immortus, but it’s likely his variant, Kang, will be much more sinister and conniving when he finally hits the screen.

Maybe some of you kept up with all the twists and turns of a seemingly endless and circular timeline, but I certainly did not. If you did? Hey, nice work!

Unfortunately, this is the nature of time travel exploits. I’ve spent the last few hours since watching running my mind across of the things that didn’t quite add up, but I still find myself mildly confused. It’s certainly a tough ask to write a logically flawless show that literally defies the laws of time and space. In my book, the writers did a solid job of tying everything together, but I still felt there was some parts that were left missing.

I’ll try and rattle off a few of the things I’m likely to lose sleep over.

Perhaps I’ve missed some glaringly obvious clues, but I felt like I was paying fairly close attention.

What Does This Mean For Loki?

central character. Just what is Loki’s place in the greater MCU?

At this point, Tom Hiddleston has been a big part of the MCU for a decade. His death in Avengers: Infinity War would make for a semi-heroic goodbye to a character who battled with his lust for a throne. However, at the end of Loki, he seems to be in no mans land – both literally and figuratively. My question is; exactly how long will Tom Hiddleston’s, Loki, continue in the MCU?

Implications For The MCU

As we mentioned earlier, the episode sets up some massive implications for the entire MCU. This was easily the best part of the episode and the series as a whole.

Loki season 2 will definitely pick up where season 1 ended. But it also seems clear that Dr. Strange and the Multiverse of Madness , Ant-Man and the Wasp: Quantumania & Spider-Man: No Way Home, will all pick up the multiverse theme.

The re-creation of the Multiverse allows for characters such as the Fantastic 4 & X-Men to appear without creating any major plot holes.

Additionally, we may be in for surprise pop-ups from Iron Man, Captain America & Black Widow. However, my favourite outside of the box idea is that Marvel could bring back some villains who were unceremoniously killed in their respective movies.

Wouldn’t that be nice?

What did you think of Loki Episode 6?