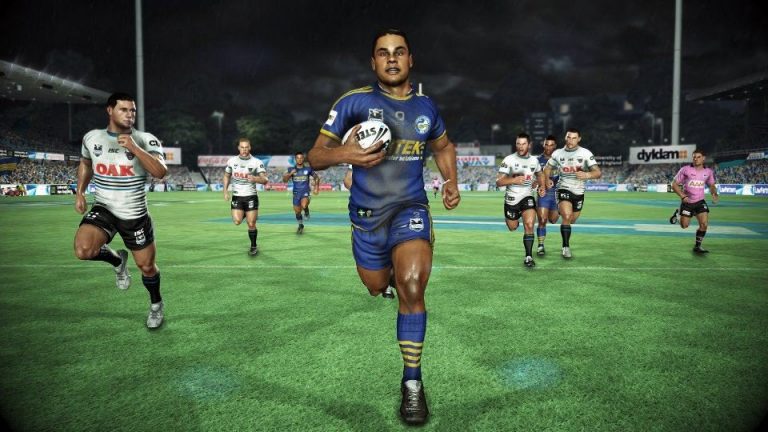 Plus, check out the video at the bottom of the article for a full recap of every rugby league game that’s hit the market.

Will There Be A Rugby League Live 5?

Although the graphics and gameplay of ET’s Rugby League are simplistic, the ease of use and enjoyability of the game still shines through. As a trailblazer for Rugby League games, it deserves it’s spot.

Rugby League 2 was a massive hit when it was released in the Summer of 2005. A sequel to Tru Blu’s first league game, Rugby League 2 was a venture outside the realms of a simple quick match/season mode game that become synonymous with the early 2000’s. Rugby League 2 introduced an ahead of its time career mode, in which players could play lengthy careers with a particular team, signing new superstars as the years ticked by.

The gameplay, graphics and animation took a whole new step, become much more user friendly and lacking the square, lifeless nature of the first title.

Rugby League 2 is one of those games that you could still pop into your consoles and enjoy despite being 15 years old.

The top 2 spots on this list will almost certainly create some debate. I think that the order in which you list them will likely come down to your age. For us, Rugby League Live 3 ranks as the second best Rugby League game of all time.

Rugby League Live 3 is easily the best game built on modern consoles. Published by Tru Blu and developed by Big Ant Studios, RLL3 has the best graphics and animations of any rugby league game on the market (including its successor, RLL4). This game is widely praised by fans with few disliking its game style.

As Rugby League Live 4 was a failure in the eyes of the fans, it’s helped cement RLL3 into the sport’s gaming folklore.

We’ve reached the final game on our list, and the one that we consider to be the best Rugby League game of all time. On it’s surface ARL 96 seems like a very simple game…and that’s why it’s so great.

The game has either a quick match mode, or a season mode. You were able to create new player names and customise their attributes. The commentary features the irreplaceable Ray ‘Rabs’ Warren as the play-by-play guy, with Paul ‘Fatty’ Vautin as a pop-up colour commentator.

But truly, it’s the gameplay that stands out. As we mentioned, ARL 96 is a simple game and that’s why it’s so good. There are no fancy animations to bog down the realism or over-emphasis on graphics. You simply kick off and play a game of rugby league. The passing and kicking is smooth and effective. It can take a bit of time to figure out the flow of the game, but once you get going, you’re going to have a great time playing.

What does your list of all-time rugby league games look like? Let us know in the comments below!

Every Rugby League Game Ever

As we mentioned earlier, here’s a video on All Rugby League Video Games Ever.

Are you a big gamer? Head to our gaming section to read all the latest in the world of gaming.