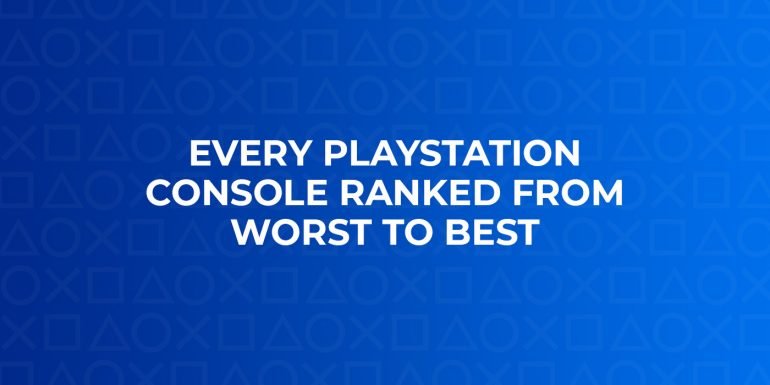 Ranking Every PlayStation Console From Worst To Best

Recently, we ranked Every Xbox Console from Worst to Best. It seems only fair that we do the same for every PlayStation console ever.

Not that this really matters, but as someone who enjoys patterns, I appreciate the PlayStation’s adoption of sequential numbers in their console names.

Let’s dig a little deeper into this, and rank Every PlayStation Console From Worst to Best.

The PlayStation 5 is an incredible gaming console. No one is going to deny that. I have one and I love playing it. But you can’t argue that the consoles release was a bungled fiasco. Stock shortages has resulted in unprecedented levels of price hiking from scalpers. Additionally, there has been a limited catalogue of games to accompany the console’s release.

In the next few years, it’s likely that the quality of gaming on the PS5 will be so high that we will have forgotten all about this. But for now, the PS5 must unfortunately sit at the bottom of this list.

It feels wrong putting the PlayStation 4 in second last spot. But such is the overall quality of this list. The PS4, and subsequent updated models, was a true high point for high-definition, immersive gaming. The PS4 debuted in November 2013 and is still being sold in 2021.

While the quality jump in games wasn’t as pronounced as the jump between PS2 and PS3, there is still a treasure trove of incredible titles that can be explored on this console.

As of August 2021, the PS4 has sold 116.4 million units. This doesn’t reach the outrageous highs of the PS2, but it still makes the PS4 a whopping success for Sony.

Originally, it was simply known as the PlayStation. However, over time that’s obviously needed to change. The PS1 was the first of Sony’s line. The console, for the time, was groundbreaking. It was first released, in Japan, in 1994, before reaching North American shelves in September 1995. For Australian’s the PlayStation was released in retail stores in November 1995.

The PlayStation was an enormous leap forward for console gaming. While the Nintendo 64 would go on to produce incredible games upon its release in 1996, you could argue that all modern consoles are direct descendents of the PlayStation 1.

As we mentioned earlier, the PlayStation 3 was the biggest technological leap between any of the PlayStation consoles. This goes for hardware and software. In our opinion, the PS3 is the first of Sony’s ‘modern consoles’. It’s a fantastic device. To this day it does not feel overly outdated.

Adding to it’s impressive resume, the PS3 has a fantastic GUI. The console’s gameplay is smooth and it was the first in Sony’s line to take a big dive into online gaming.

Ranking Every Xbox Console From Worst to Best

The PS3’s grandest success was in it’s enormous quality leap from the PlayStation 2. The PS2 was an unreal console (as you’re about to find out), but the games have become somewhat dated. The PS3 technology still holds up, although obviously it struggles to compete with the PS4 Pro & PS5 consoles.

The PlayStation 3 is ranked #5 in our list of The 10 Best Selling Games Consoles Of All-Time. The PS3 sold 87.4 million units.

It’s hard to give #1 to anything other than the PS2. It’s the highest selling games console of all-time. And by a country mile, as well.

The PlayStation 2 sold an unbelievable 155 million units. The console was an enormous success for Sony, and cemented their spot as the leading console manufacturer. A title they remove from Nintendo’s claws.

The PS2 was born in an era between modern and retro gaming. The console is still a fantastic device, but compared to the PS3, it feels much more dated.

That doesn’t take away from what is truly an impressive technological achievement, mixed with a huge catalogue of quality games.