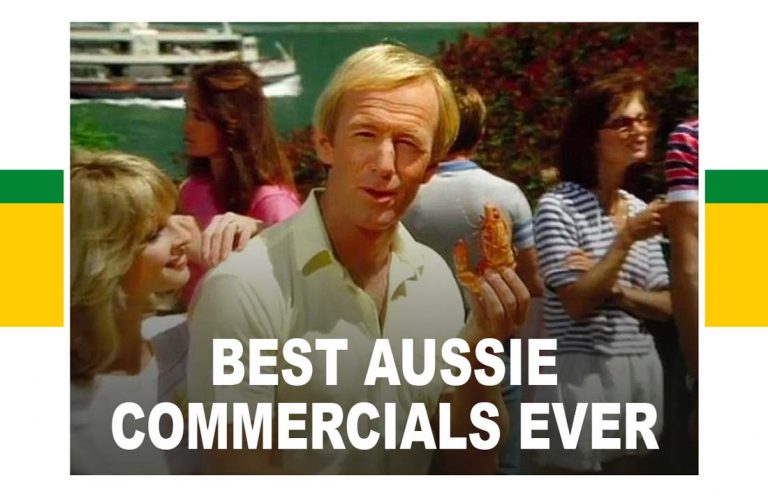 14 Of The Best Australian Commercials Ever

Australia has a wonderful history of world-class commercials. Whether they’re highlighting the country, trying to make us thirsty or just plain funny, creating memorable commercials is a genuine Australian artform. We’ve spent several *highly enjoyable* hours delving through the rich catalogue of Aussie commercials. We’ve put together a list of 14 Of The Best Australian Commercials Ever.

This Australian tourism commercial came in the middle of an American tourism boom in Australia. Paul Hogan was making International strides as an actor and the rest of the world was starting to discover the incredible country of Australia. This commercial was created by Mojo, a legendary Australian advertising company run by Alan Morris (“Mo”) and Allan Johnston (“Jo”).

Ah yes, the Man Shed. This ad has always been a personal favourite. The concept of living so close to your mates and building what is possibly the best ad hoc pub of all-time is something i still hope to achieve. God bless their barely thought through excuses for heading to the shed, only to return presumably highly intoxicated.

For All Creatures, Great And Small – RSPCA

This is by far the cutest ad in this list. It was created way back in 1988 to bring attention the the RSPCA. Their brand catchphrase, “For all creatures, great and small” remains to this day. The uncertain Wombat is still a personal favourite.

This is one of the ads we spoke of earlier which would be unlikely to pass the PC test in 2020. I can remember first hand how funny this ad was when it first aired. Although, thanks to the overwhelming amount of ad breaks in Channel 9’s coverage of the cricket, it got less funny after the 300th watch, looking back on it after 15-odd years, it still brings a giggle.

Make Your Bodies Sing was a campaign made for Australian Bananas, to promote health to Australian kids. The commercial felt like it ran throughout my entire childhood, with the song sticking to my brain like Blu tack. Every time i hear it it stills bring back a strong sense of nostalgia.

1999, what a year it was for Australian sport. The Olympics was only 1 year away and both the Wallabies & Australian Cricket Team were World Champions. Weet-Bix capitalised on this with a series of commercials featuring both sides. The ‘How Many Do You Do?’ campaign ran for ages and helped make Weet-Bix the breakfast of choice for active kids in the 90’s & 2000’s.

I know it probably seems like i have a drinking problem due to the amount of beer commercials in this list, but i swear it’s just due to their quality. The VB commercials have always followed a similar pattern and they continue to use “A Hard Earned Thirst” as their brand slogan. This commercial, and many others, were voiced by John Meillon, an Australian actor who passed away in 1989. The family of John Meillon graciously allowed VB to use the actors voice after his passing. His voice overs continue to this day.

Carlton went through a period of time in the early 2000’s when they were just absolutely nailing their commercials. You’ll probably notice that many of the beer commercials in this list were for Carlton Draught. This ad was definitely big, and it ran for a long, long time.

Everyone always points to the subtle fat-shaming as the highlight of this ad, but to be honest, the random elevator style entrance from the elderly shop attendant takes the cake. I’d be lying if i said i didn’t quote the line, “i just want milk that tastes like real milk”, at least once per year.

This Yellow Pages commercial is another that will live in infamy for it’s memorable line, “Not Happy Jan”. In fact, the line was so memorable that throughout the country it became a catchphrase for not being disappointed with someone or something. I wonder if Jan ever got around to placing that ad?

This ad isn’t actually that good, but if you’re an Australian reading this, you know exactly why it’s been listed. The little kid quoting the number for Lube Mobile was so catchy that I’d be willing to bet every Aussie over the age of 25 could tell you Lube Mobile’s number without a second’s hesitation.

How Do You Feel – Tooheys

Another Mojo classic. Mojo create a whole bunch of advertisements for Tooheys “How’d You Feel” campaign. Of course, the campaign is most famous for its memorable line, “i feel like a Tooheys”. More than 30 years later and the ad still makes you thirsty.

Although we could probably do a whole article on legendary Mojo advertisements, we promise this will be the third and final of this list. I still call Australia home was developed as an advertisement for Qantas, and it still has a way of bringing a cheeky tear to the eye of any Australian. Anyone that’s travelled overseas can tell you that there’s nothing quite like the plane landing in Australia and hearing the comforting sounds of Australian accents letting you know you’ve arrived.

Do you feel like we’ve missed anything? Let us know in the comments below