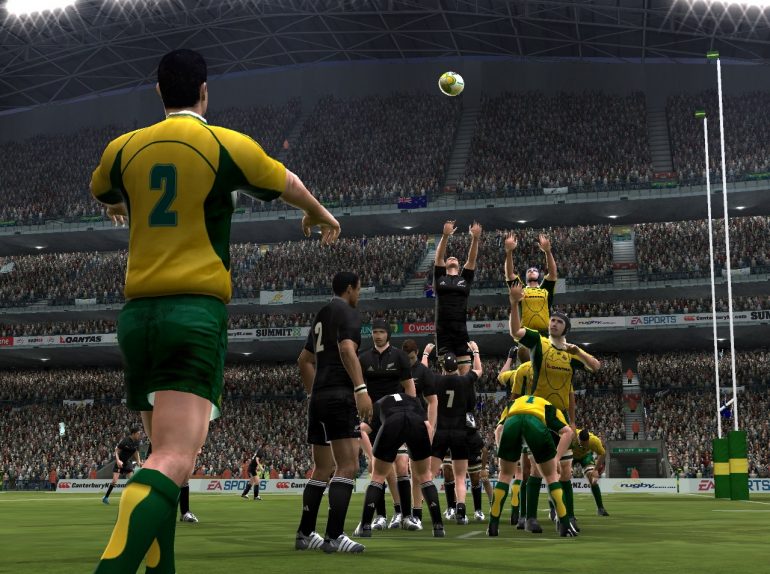 It’s no secret that the last decade has been rough for fans of Rugby games. This isn’t due to a lack of games, but more-so due to a lack of quality. Browse any play-through from a modern Rugby game on YouTube and you’re bound to see the same sort of comments.

“Just make a new version of EA’s rugby games”, “How is Jonah Lomu still the best game?”, and on it goes.

Now, YouTube comments aren’t exactly a haven of intellectual conversation and debate, but on this occasion their views are firmly in the majority.

For the last decade, Rugby games have been quite bad. I don’t mean to criticise the hard working developers and publishers that made the games. I’m quite sure they tried their best, but unfortunately, they simply did not succeed. However, It hasn’t all been abysmal. Many consider the early editions of Rugby Challenge to be more than playable, while gamer reviews for the recent Rugby 22 have stated that it’s improving with each edition.

You’re probably wondering, “Why is he going on about how bad modern games are in an article about the best games?”.

Well, I simply wanted to paint you a picture of where the genre stands, to further highlight the heights that Rugby games once achieved.

Between the mid-1990’s and the start of the 2010’s, Rugby games were at an elite level. For a while, each new game was improving on the one that came before it.

Although they won’t feature on this list, games such as Rugby World Cup ’95 and Rugby 2000 pushed the genre forward in new and exciting ways. It will come as no surprise that both of these games were published by EA Sports.

For a while, EA Sports was untouchable when it came to sporting simulation games. Between the 90’s and 2000’s they held a monopoly over the sporting industry. Sports such as Soccer, Gridiron, Basketball, Rugby League, Cricket, Racing, Ice Hockey, Boxing and Golf were all under the EA Sports umbrella. Rugby was no exception to this trend, as EA Sports released 6 games within the space of 13 years. You’ll soon see that one of these games features in our list. A fact that should come as no surprise to Rugby gamers.

Now, let’s run through this list, starting with #3 and working our way down to #1. Here are the 3 Best Rugby Games of All-Time.

Rugby World Cup 2011 was the first Rugby game released after EA Sports moved on from their franchise. The rights were picked up by 505 Games, while the development was done by HB Studios. Interestingly, HB Studios were also responsible for the development of the EA sports Rugby franchise.

HB Studios experience and knowledge of how to create the perfect Rugby game really shines through in Rugby World Cup 2011. The gameplay is smooth and allows for an experience which comes ridiculously close to the real thing. The game features a few lapses, with some of the rules not marrying up with their real world counterparts. However, it doesn’t take away from what is a super Rugby simulation.

Unfortunately, 505 Games weren’t able to access rights for all major Rugby nations. However, half of the teams (mostly European) are fully licensed. Teams such as Australia and New Zealand feature fictional players and uniforms.

Rugby World Cup 2011 features only national teams. This is probably where the game falls further down the list than most. If the game had’ve delved deeper into the domestic leagues there may have been an opportunity for this to be Rugby’s best game.

Jonah Lomu Rugby is the oldest game in this list, but it’s age does not take away from the games quality. On a personal note, this is the earliest Rugby game that I can remember playing. To this day the gameplay remains smooth and user friendly. If Codemasters ever released a remastered version on modern consoles I think I’d lose the plot.

What made Jonah Lomu Rugby such a good game was it’s gameplay which required delicate and precise passing to master. Additionally, defence was particularly difficult. When playing against teams such as New Zealand and South Africa, it can be quite tough to win.

Jonah Lomu Rugby featured the 16 teams that took part in the 1995 Rugby World Cup. These teams were:

The games commentary, supplied by Bill McLaren and Bill Beaumont is iconic.

Jonah Lomu Rugby was developed by Rage Software, which would close it’s doors in 2003. Codemasters was bought by EA in 2021 for $1.2 billion.

Rugby 08 is the undeniable king of Rugby games. The game was developed by HB Studios and published by EA Sports. Although EA developed Rugby games for many years, it was the span from 2005 to 2008 that solidified their standing as the leader in the genre. Rugby 2005, at the time, was the best Rugby game to be made. Although not a whole lot changed between Rugby 2005 and Rugby 08, the small improvements push Rugby 08 to the top of the list.

Rugby 08 is everything you want from a Rugby game. The passing, kicking and tackle physics is the highlight of the game. I don’t know what they did, but their systems have not been able to be replicated in any Rugby or Rugby League game since.

Rugby 08 is fully licensed – this goes for International and Domestic teams. The game features a World Cup mode, as well as a World League. The World League forces you to start with a team of battlers, before progressing your way to a team of superstars. If you’re more into domestic leagues, Rugby 08 features all the fully licensed teams from the Guinness Premiership and Super 14.

HB Studios did such a great job with this franchise that they were brought back for Rugby World Cup 2011, which we discussed higher in the list.