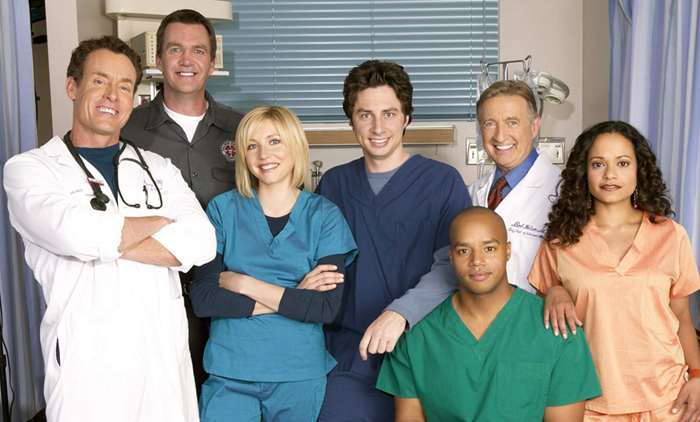 The 5 Best Scrubs Episodes Of All-Time

Scrubs is one of those classic television sitcoms where you’d struggle to find someone who hates it. Scrubs ran from 2001 to 2010 (although we all try to pretend the 9th season never happened). The show shot to acclaim for its ability to seamlessly switch between goofy humour and dramatic, heart-wrenching sequences and monologues. It also featured the one quality that tends to set all the greatest shows apart from the pack; an incredible soundtrack.

Often it can be quite easy to pick from a shows catalogue and create a Top 5. But in the case of Scrubs, it was one of the harder list we’ve had to write. Scrubs has an incredible list of episodes, the best of them often lending from the episode that came before. Despite the difficulty, we’ll be listing our picks for the 5 Best Scrubs Episodes of All-Time. Here we go…

JD is handed the unfortunate task of introducing Dr. Kelso at an awards dinner. Determined to provide an honest account of his character, JD sets out on a task to find one good thing about Kelso. Dr. Cox and Dr. Kelso both have patients who need to enter an experimental drugs treatment, but there is only one spot left. Kelso gives the spot to his patient, due to the patients wealth. Meanwhile, the Janitor & the rest of the Sacred Hearts staff enter an elaborate prank to force JD to play a game of “Jiggly Ball”.

My Jiggly Ball gave us a rare opportunity to see decisions from the Chief of Medicine’s point of view. Sure, the man isn’t perfect, but once and for all we find out that he is not without empathy.

Dr. Kelso is routinely faced with lose-lose decisions. His job is to make ensure all decisions are in the best interest of Sacred Heart, as tough as that may be. Although he made a choice that meant that one man would ultimately die, he didn’t do so without sacrificing a piece of his soul. As they often say, uneasy lies the head that wears a crown.

When Dan shows up on JD’s doorstep with a cake in hand, he knew something was wrong. Sadly, JD’s father had passed away. Everyone at Sacred Heart shows their support to help JD through this difficult time.

Dan deals with the loss by drowning his sorrows in beer and bath water. Dr. Cox takes on all of JD’s workload to allow him to process his sadness and get away from the Hospital.

My Cake was written as a tribute to actor, John Ritter, who sadly passed away a year earlier. Ritter played JD & Dan’s father. The episode shows how JD often struggles to truly deal with his emotional issues, even in the most dramatic of circumstances. While Dr. Cox attempts to be there for JD by taking on all his duties, it’s clear that what JD really wants is someone with which to talk. Ironically, this is another illustration of how JD views Dr. Cox as a father figure. The episode ends with Dr. Cox forcing the boys to open up about their feelings about their loss. The watch a Football game, tell stories and make a toast to their late father.

While Dr. Cox is away from the hospital, JD is asked to examine Dr. Cox’s best friend, Ben. All of JD’s patients need urgent attention at the same time and one of them dies. When Dr. Cox returns, JD presents him with the chart and Cox angrily sends him home, blaming him for the death. After days of hostility, Ben encourages Dr. Cox to forgive JD & himself. Cox eventually comes to terms with the fact that it was Ben who died. The episode ends on a sad note with everyone attending Ben’s funeral.

I remember watching this episode like it was yesterday, it had a real sixth sense vibe. The realisation that it was actually Ben who died is a plot point that still cuts to the bone, even after all these years. The sight of a usually guarded Dr. Cox being comforted by his friends and family shows his humanity, and that deep down he wears emotional tolls just as hard as the rest of us. This episode, along with Laverne’s death, is one of the saddest episode of Scrubs.

Turk begins his new rotation as an orthopaedic surgeon but doesn’t love his new attending doctors touchy-feely personality. JD comes to terms with Dr. Cox’s actions and provides the motivation that convinces Dr. Cox to finally get back to his life.

My Fallen Idol gave us a glimpse of what happens when an individual reaches rock bottom. The fact that even someone as strong as Dr. Cox can suffer so much torment after so many years as a doctor shows that everyone is capable of falling. JD’s realisation that his struggles were more a reflection of himself, was one of his more grown-up moments of the series. This episode was a powerful reflection of the fact that Dr. Cox puts more weight in JD’s opinions than he’s ever let on. It was a fitting conclusion to a powerful couple of episodes.

JD asks Dr. Cox to lunch but is repeatedly denied. While at the supermarket he runs into an annoying former patient. JD is forced to spend a lunch with her, which he seemingly loathes. Later, JD is handed a chart for that same patient who is now on their deathbed. JD blames himself for her death. Dr Cox takes JD to a lunch in order to ease his guilt. Dr Cox later makes a decision about a potential donor which inadvertently causes the death of four patients. Devastated, Dr. Cox leaves the hospital.

I don’t even know where to start with My Lunch, the whole episode is perfection. Without sounding like a cliche, the episode takes you on an emotional rollercoaster. Initially the torment for a patients death lies with JD, but a total shift occurs and suddenly Dr. Cox is the one in pain. The scene capturing the final patients death is possibly the best in Scrubs entire run. The use of The Frays, How to Save a Life”, was perfectly executed. My Lunch was the episode that preceded our #2 episode, My Fallen Idol. Arguably the best 2-episode run in sitcom history.

What do you think of our list? What are your Best Scrubs Episodes ever? Let us know in the comments | Other Top 5 Countdowns