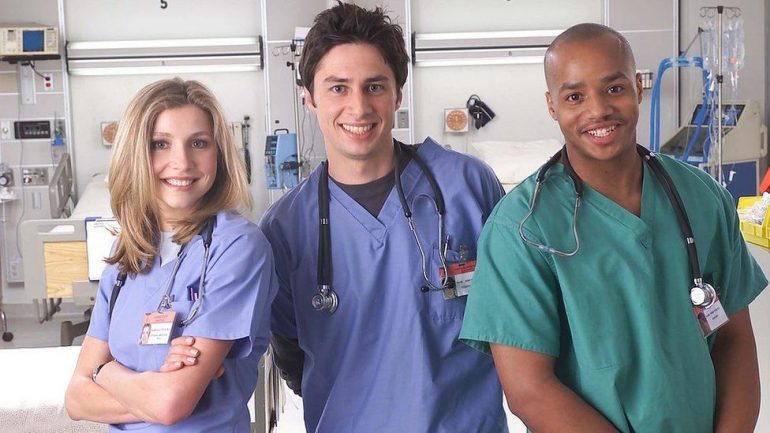 The sitcom genre has had a few very successful eras, and the 2000’s can proudly be considered one of them. Following on from a wildly successful period in the 90’s, it was important (for the networks) for the 2000’s to follow this trend. Thankfully for all of us, the quality and quantity remained fairly consistent throughout the decade.

It was always going to be a tough ask to follow on from the success of Frasier, Seinfeld, Friends, The Fresh Prince of Bel Air, Full House & many more. But thanks to the creation of the ‘sitcom formula’, shows like How I Met Your Mother & The Big Bang Theory were able to pick up the slack.

However, the genre went through somewhat of a revitalisation thanks to the efforts of shows like Arrested Development, The Office, Parks & Recreation & Scrubs. Laugh tracks and one-bit jokes were no longer required for success in the prime time television spots.

Below we rank the 5 Best Sitcoms From The 2000’s. We are basing our rankings on several factors including critical acclaim, contemporary resonance and general ‘funniness’.

Shows often cross into a second decade, so this list will feature shows which featured in 3 or more years within the 2000’s.

The show featured, at least at first, a group of 4 scientists who befriend a beautiful and ‘street smart’ young woman named Penny. As the show grew, so did the characters. Along the way we were introduced to Amy and Bernadette, who became show regulars.

Check out the Top 20 Best Episodes of The Big Bang Theory Ever.

Arrested Development focuses on the Bluth family, a formerly wealthy family who have fallen on tough times thanks to their Father’s wildy illegal activities. The show follows the majority of the family, but mainly focuses on Michael Bluth. Michael’s attempts to keep his family’s business alive regularly go awry.

Dysfunctional as they may be, the Bluth family is hilarious and responsible for some of the best GIFs of all-time.

The only reason Arrested Development isn’t further down the list is due to its lack of longevity. The show only aired 3 seasons within the 2000’s period.

3. How I Met Your Mother

How I Met Your Mother was a simple premise – a man sitting down to recount to his children how he met their Mother. What unfolded was almost a decade of laughs and genre defining moments. How I Met Your Mother also gave us Barney Stinson, one of Television’s greatest characters.

The show followed a familiar sitcom style and as a result has been routinely compared to Friends. Not helping this was the fact the show was about a group of friends in New York City.

If How I Met Your Mother had of carried the quality of its first 4 seasons throughout the entirety of the show, we may be regarding it as one of TV’s greatest ever shows. Unfortunately, that wasn’t to be; however, it doesn’t take away from what turned out to be a truly terrific sitcom.

If you want to check out a list of the Highest Rated HIMYM Episodes, you can read that here.

The Office is a toughie, because it has existed in two separate formats. You’re either a fan of the British version, or the American version. I’ve rarely met a person who’s both.

Just like Modern Family, the show was filmed in a mockumentary style. In fact, the shows success, off the back of Arrested Development before it, was likely responsible for Modern Family and Parks & Recreation to become as successful as they did.

At times, The Office relied on a heavy assortment of awkward humour, but it was the shows byplay between character which always resulted in it’s best laughs.

I challenge you to sit down and watch a YouTube clip of Jim’s best pranks on Dwight without bursting into a laugh or three. In fact, I’ll spot you the video.

The show had a unique ability to deviate off course with ridiculously silly (although funny) scenes, but it would always find it’s way back to deliver a strong message or heart-warming moment. Scrubs is truly one of the funniest shows, not just of the 2000’s, but of all-time.

Scrubs wins extra points for having one of the best soundtracks I’ve ever heard in a TV show.

Our list of the 5 Best Scrubs Episodes of All-Time can be found here.

How does this list compare with yours? Let us know in the comments section