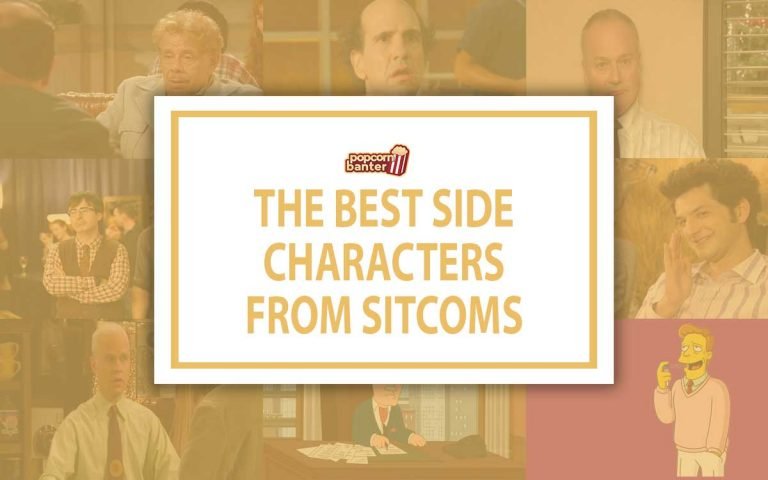 The Best Side Characters From Sitcoms

For all the praise that TV’s leading men and women receive, it’s important not to forget the often poignant contributions of any sitcoms side characters. Whether they are chiming in to throw a barb at our leading characters, or simple there to throw a spanner in the works, side characters are an integral part of sitcom culture.

To celebrate their importance to plots, humour and to reduce the time-on-screen burden that many main characters face, we’ll be taking a lot at The Best Side Characters From TV Sitcoms.

He was loud, he was brash and he was hilarious. No one could have played the part of George Costanzas’ Father with more accuracy than the late, great, Jerry Stiller. Frank lived in Queens with his wife Estelle (George’s Mother). They rarely ventured into the city, so most of their on screen time was spent in the Costanza family home. Frank Costanza contributed too many of Seinfeld’s funniest, most memorable moments.

Creed Batton was an employee of Dunder Mifflin. His character features all throughout the series, but he wasn’t a noticeable aspect of the show until Season 2. As the seasons progressed the character became darker, egotistical and increasingly segregated from the modern world. His direct-to-camera quotes are some of the funniest in the shows run. Apparently, the character was once on the chopping block, but the show runners ultimately decided not to write him off.

Creed has become an internet Meme and GIF sensation. The character is played by an actor/musician of the same name.

This is Troy McClure. You may remember him from such articles as, “The Best Side Characters From Sitcoms”.

Depending on the episode, Troy McClure is a Hollywood A,B,C or D lister with a knack for explaining the mundane via short, but informative documentaries. Known for his catch, “You may remember me from…”, there is a 100% guarantee of a solid line or passage of humour whenever he’s on the screen. Unfortunately, Troy McClure (and Lionel Hutz’) time on screen was cut short when Phil Hartman tragically died in 1998. He was featured heavily in the episode, “A Fish Called Selma” where it was humorously implied that Troy had a grotesque fetish that revolved around aquatic life.

The best part of this is that Maris Crane, as a tangible person, doesn’t actually exist. The writers, quite rightly, decided it was much funnier for her to never appear, rather than give a face to the ridiculousness. Originally, they had intended to cast the role. But as Niles’ descriptions of his first wife became more vivid and absurd, it became obvious that this character could never be accurately depicted. What we’re left with is a myriad of funny quips and descriptions of Maris Crane.

Jean-Ralphio is the embodiment of every person you’ve ever wanted to walk away from at a party. He’s loud, he talks fast and he over-emphasises every word. But in the world of sitcoms, he’s absolute gold. Jean-Ralphio is despised by pretty much everyone, except for his friend, Tom Haverford (played by Aziz Anzari). Tom sees himself as a big-time player, who tries to dress the part and speak with, what he considers anyway, to be contemporary slang. Jean-Ralphio appears in just under 20 Parks & Recreation episodes.

Carter Pewterschmidt is Lois’ extremely wealthy Father. He is a depiction of a stereotypical white, elder, wealthy American. He is obnoxious, racist and a massive bigot. Carter hates Peter endlessly, and consistently shows sadistic tendencious towards Peter’s misfortunes. He believes that money is the secret to his and everyone’s happiness, recoiling at other’s needs to show love or affection.

Carter’s humour derives from his tendency to not care at all what other people thinks. Throughout the series, he delivers some hilarious lines, usually at Peter’s expense.

Ted is one of Scrubs best characters. He sits just outside the central characters list since he was rarely the focal point of storylines. The lawyer with a tendency to produce flop sweat, is an innocent, anxious and often overlooked middle aged man. The quality of Ted’s character stems from his almost non-existent self-esteem, causing many characters (although often Kelso) to take pot shots. Ted celebrates the small wins, such as when Dr. Cox okays him never having to fetch coffee again.

Despite Ted’s many, many issues, he’s a talented musician and a great singer. His band, The Worthless Peons, were allowed to play during night hours in the hospital, singing A Capella version of hit sitcom or animated theme songs.

Gunther was the mild mannered and introverted waiter from Central Perk. He spent the entire series (perhaps with the exception of his first episode), in love with Rachel. Gunther was always there, or there abouts during the show, since the 6 Friends spent most of their time in the coffee house. Although he was never one to make you belly laugh, his contributions were often memorable and humorous.

Dr. Ian Duncan was a scene-stealing and fantastic edition to the Community setup. Although the shows first 3 seasons are basically wall-to-wall laughs, the good Drs. ability to bring out humour from relatively meaningless sequences are a true joy of the show. It’s a shame that Dr. Ian Duncan’s run on the show was only fairly small as he would have helped Community through it’s struggles during season 4 and 5.

John Oliver brought his classic English sarcasm and wit to the role, creating a wonderful comedic blend when he was placed into the Community college environment.

Do you have a favourite sitcom side character that isn’t on this list? We’re always adding more side characters to this list, so let us know your favourites in the comments section below.