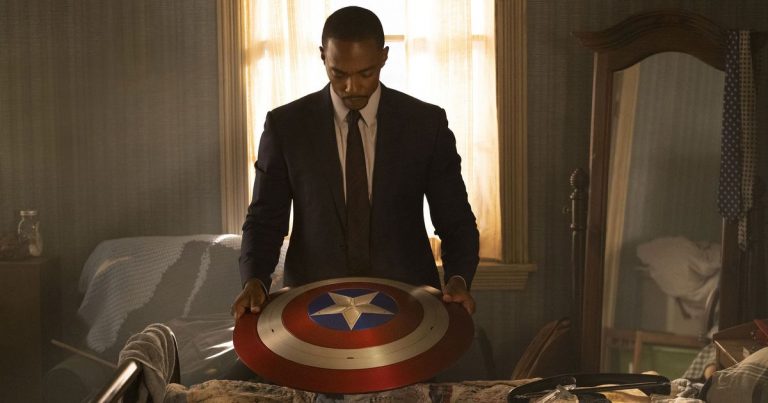 **This review will feature spoilers for The Falcon & The Winter Soldier: Episode 1**

Only 2 weeks after the finale of the first MCU-adjacent Disney+ show, WandaVision, The Falcon & The Winter Soldier has aired its first episode. You would have been forgiven for thinking the tone and dynamic of the show would follow in the footsteps of WandaVision, but you would also be wrong. In fact, The Falcon & The Winter Soldier, within its first 5 minutes, reminded us of the delightful action sequences and robust filmmaking of The Captain America films that came before it.

Where WandaVision was goofy, wacky and mystical, The Falcon & The Winter Soldier was grounded, serious and intense. This shouldn’t come as any huge surprise to MCU fans. The franchise has always done a wonderful job of ensuring mystical and fantastical elements are met with a chorus of light-heartedness and humour – this is to ensure the audience doesn’t get taken away with the absurdity of it all. On the flip side, the movies (and now shows) which have dealt with non-super-powered beings rely on their serious tones, intense action and emotional connections to power the narratives.

The Falcon & The Winter Soldier wasted little time settling into the show, with a beautiful action sequences given us a taste of what’s to come. Sam, donning the Falcon outfit, flew his way in and out of a huge canyon while single handedly taking down a squadron of terrorists (#badass) with a flurry of explosions, takedowns and epic maneuvers.

After the initial 10 minutes of intense action, the episode gave viewers a glimpse into the emotional arcs we’re set to delve into.

Bucky, still struggling to come to terms with his past, is now, unwillingly, in Government-mandated therapy. Although he’s been granted a full pardon, this hasn’t allowed him to fully escape The Winter Soldier within. Bucky is terrorised by nightmares of his past, as he begins ‘making amends’ for the people he’s hurt. Since Steve left (or Died?), Bucky has been pushing people (including Sam) away, and living a lonely existence. His one friend, an old man named, Yori, plays a vital role in the acknowledgement of Bucky’s struggles. Towards the end of the episode it becomes clear that Bucky must make amends towards Yori for the killing of his son while he was The Winter Soldier. That’s powerful stuff.

While Bucky is battling his demons, Sam is battling another Demon, of sorts – the bank. Sam, desperate to cling onto his life outside of the Avengers, convinces his sister to try for another loan to save their families boat. However, the bank refused their application as Sam hadn’t been employed for 5 years (you know, because he didn’t exist). The whole boat-saga, although it did drag, helped to show the man Sam is outside of his crime-fighting life, along with what drives him.

Saving the strongest emotional hit for last, the episodes true focus, and perhaps what will drive the narrative forward, lies in Sam’s relationship with Captain America’s shield. At the end of Avengers: Endgame, Steve handed the mantle of Captain America to Sam. However, Sam, who has grown increasingly uncomfortable with the idea of “replacing” Captain America, decides to hand the shield over to the Smithsonian. From a relationship point of view, this is a pretty massive deal as Steve gave Sam the shield in the hopes he would continue to serve as Captain America. Sam, while doing so in a way that is respectful to Steve’s legacy, is (as far as we know) going against Cap’s wishes. For a man who has been nothing but dutifully loyal, this is a big deal for his character.

The episode ends with an emotional punch to the stomach, as the US Government, feeling that America needs a hero, unveil “the new” Captain America, John Walker. This Captain America, played by Wyatt Russell, looks more like the Captain America you’d meet at Disneyland than he does Steve Rogers. But nevertheless, his presence is enough to make Sam sink in his seat, shattered by the disrespect and (probably) the feeling of being overlooked to take up the mantle.

This episode was a wonderful introduction to the show and perfectly laid the platform for where these two characters are at. Evidently, both Sam and Bucky are more broken than they’ve ever been, and perhaps only together they’ll be able to find their way to some sort of peace.