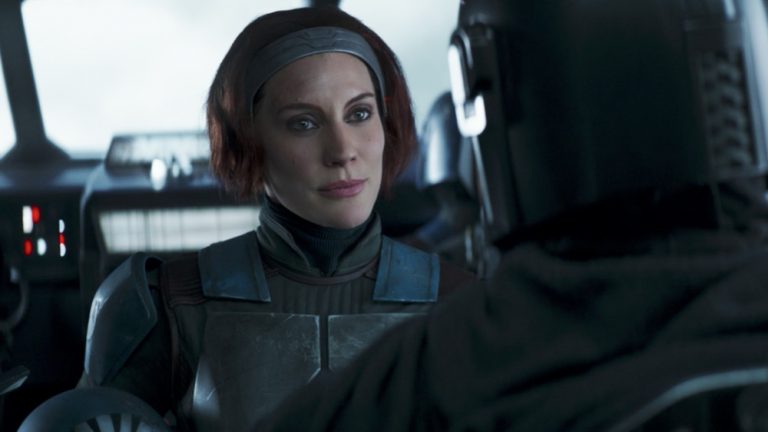 ‘The Mandalorian’, Chapter 11: “The Heiress” Review

Actually, I’m not annoyed or frustrated at all. I just thought that was funny and wanted to say it.

After my frustrations at Chapter 9 & Chapter 10, The Mandalorian hit back in solid fashion with Chapter 11: “The Heiress”. I mentioned both in my reviews and through the Popcorn Banter Mini series, that The Mandalorian had started season 2 with an extraordinarily slow, ‘enemy of the week’ format that just wasn’t working for me. Thankfully, that didn’t last too long and Chapter 11: “The Heiress” actually helped promote the season 2 plot.

This episode was the first time we’ve seen any Mandalorians since their epic battle towards the end of season 1. Although, they’re not exactly the kind of Mandalorians that the show is used to. In ‘The Heiress’, we meet Bo-Katan (Katee Sackhoff), Axe Woves (Simon Kassianides) and Koska Reeves (Sasha Banks), who come to the Mandalorians rescue after a Davy Jones lookalike tried to pull a number on him and the child.

Naturally, the Mandalorian is pulled into another quid-pro-quo mission in a bid to extract information out of this weeks focal character. At least this time he had a half decent idea of the kind of information he’d be receiving.

In a desperate bid to locate a Jedi capable of helping the Mandalorian return the child to their home planet, our hero agreed to take down an Imperial ship, supposedly carrying Mandalorian weapons and armour. Unsurprisingly, everything takes a rather steep turn when we realise that the Mandalorians aren’t just after the armour and weapons; they plan to steal the entire ship. I have to give the Mandalorian credit for a surprising ability to blindly trust despite numerous stab wounds to his back. If it wasn’t for that Beskar armour he’d barely be able to float.

The episode provided numerous Easter Eggs and references. The biggest of which is the name drop of Ahsoka Tano. Fans would, of course, know the name from the Clone Wars series, and possibly the novels and comics, depending on your level of fandome. Ahsoka Tano was the padawan of Anakin Skywalker, a man who is just a tiny bit of a big deal in Star Wars lore. Ahsoka is/was a renowned Jedi and I for one can’t wait for her introduction.

Overall, this episode was an enormous jump in quality from the first 2 episodes of the season. There was some very enjoyable battle sequences with Stormtroopers, who admittedly, “couldn’t hit the side of a Bantha”. The plot progressed nicely this week and has put the show and the Mandalorian into an intriguing position moving into Chapter 12.