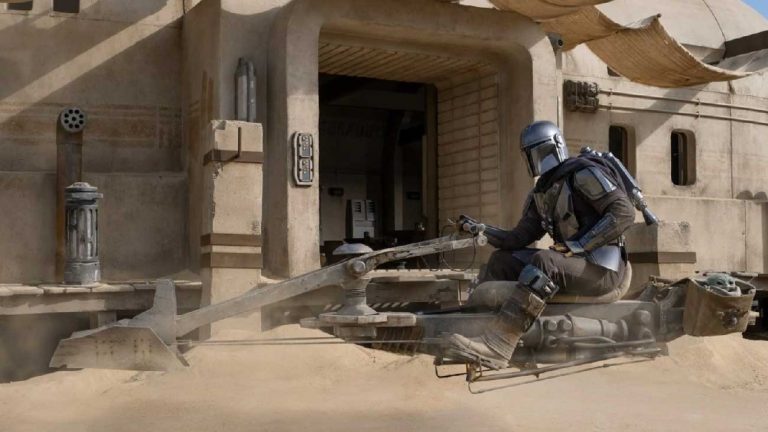 ‘The Mandalorian’ Chapter 9: “The Marshal” Review

**This review is going to contain massive spoilers for The Mandalorian Chapter 9: The Marshal. If you haven’t watched it, then seriously…why did you even click on the article? But also, you should probably look away.**

Well, The Mandalorian is back and it’s kicked off with a fun, albeit limited first episode. For anyone who had kind of forgotten the general gist of The Mandalorian, we were reminded very quickly through a few concise and dramatic opening sequences.

The Mandalorian is on a quest to reunite ‘the child’ with his own kind. He stops in at a fight club-style venue to speak with Gor Koresh, who looks like he could be the love child of Leela from Futurama and Mike Wazowski. Things go downhill rapidly. Mando seems to be in a spot of bother…but we all know better than that, don’t we? Yes, one of the Galaxies best fighters does one of those things that all badasses do to show that they are, in fact, badasses – they threaten people when they have multiple guns in their face.

This opening sequence was a great reminder of our main protagonist. He’s a man who has seen it all (almost) and will always find his way out of trouble.

As much as I did enjoy the opening episode, I was definitely rekindled with the overarching thoughts I had regarding Season 1. You see, as much as I loved the first season, it’s hard to argue that it wasn’t full of filler episodes. Even though it’s early days, it seem as though season 2 will follow a similar pattern. There’s nothing wrong with that, it’s just if you’re going into the season expecting it to be filled with story progressing plots, I’m afraid you may be setting yourself up for disappointment.

The shows tagline should be, “The Mandalorian: Big on action, low on story…and that’s okay”.

Chapter 9: “The Marshal”, brought us back to the Star Wars universe’s favourite place, Tatooine. Tatooine is this universe’s version of New York City; everything is set there. The Mandalorian is searching for fellow Mandos to help him in his search for the child’s home. He believes he can access his network to forge his path. It’s here that we’re introduced to a gentleman named, The Marshal (who I swear to God is a young version of Billy Bob Thornton). Initially we’re led to believe he is a Mandalorian; however, when he almost instantly removes his helmet, we learn that that’s not the case. Additionally, the armour The Marshal is wearing looks strikingly similar to Boba Fett’s, and since he died* on Tatooine, that might be a safe bet.

Naturally, The Mandalorian takes offence to the man wearing armour he hasn’t earned (another Season 1 “remember this?” moment) and a brewhaha almost breaks out when he tells The Marshal to remove it. Eventually, all hell breaks loose when this enormous monster rolls through town, perfectly dissecting the gap between all the highly vulnerable homes. Mando and The Marshal come to an agreement that he will return the armour if The Mandalorian helps kill the Krayt Dragon.

With the help of some surprisingly sociable Tusken Raiders, the town’s people of Mos Espa and The Mandalorian attempt to take down the Krayt Dragon by blowing it up from the stomach. The plan goes awry and many a townsperson and Tusken Raider are eaten and possibly eroded by acid? That part wasn’t completely clear, but it didn’t look he was spraying them with Iced Tea, that’s for sure.

Eventually, The Mandalorian concocts a ploy that would make Jonah proud. He allows the Krayt Dragon to devour him, before detonating an enormous explosion inside the monsters stomach. The Dragon is destroyed, leaving it’s remains for the Tusken Raiders to rummage.

The episode as a whole was fun and action packed. They definitely decided to start off the season with a bang (oh yes, that was intended). My previous point about the lack of story progression is definitely something that irked me. I don’t mind having fun filler episodes, but I probably would have waited for episode 2 to roll one out.

The reveal of a man who appears to be Boba Fett is interesting. I don’t like it when shows or movies apply retroactive continuity (*cough* The Rise of Skywalker *cough*). I’m still desperately holding out hope that he’ll just be a dude that happens to be played by Temuera Morrison. However, the reveal of Boba Fett’s armour doesn’t bode well for that. I suppose we’ll know soon enough.

All things considered, I’m just so happy that The Mandalorian is back and I can’t wait to see what unfolds for the rest of season 2.

Have you seen Hasbro’s new line of retro action figures? Check them out here.