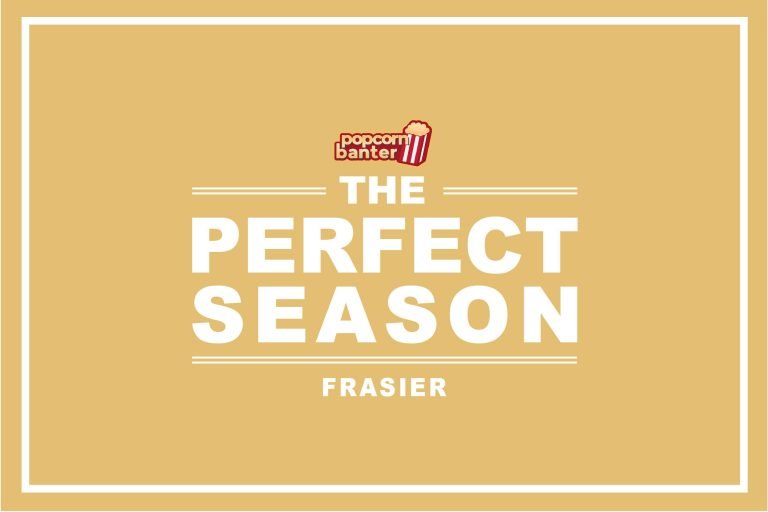 The Perfect Season is a new article series where we go through all of your favourite TV shows and find the best episodes for their respective episode number. Once all episodes are filled, this will give you “The Perfect Season” of any particular show. Determining the rankings will come down to their ratings score, as calculated by Rankin Graph, which culminates thousands of different rankings from around the web. If no clear winner can emerge for a particular episode (i.e. two episodes have a ranking of 9.2/10), then we will decide the winner based on our episode preference.

In this edition of “The Perfect Season”, we’re going to look at one of the wittiest and most adored sitcoms from the 90’s, Frasier. Frasier was set in Seattle, Washington. The show followed the lives of radio psychiatrist Frasier Crane, his father Martin, brother Niles, Producer Roz and home care therapists, Daphne.

When Daphne’s ex-fiance comes to town to profess his “undying love” for her, she must think on her feet to avoid breaking his heart again. She claims Niles to be her new Husband and that Frasier is currently living with them due to his recent breakup with his wife, Maris (Roz). When Daphne and Roz realise that he has turned into a successful businessman and upstanding citizen, they fight over his attention.

Episode 2: “And The Dish Ran Away With The Spoon: Part 2”

After Daphne runs out on her wedding day, and Niles leaves his new wife, Mel, there is significant fall out. Donny sues Daphne on emotional grounds and breach of contract, whilst Mel promises a swift divorce, but makes Niles pose as though they’re still together in order to maintain her social status.

After a false alarm wakes the Crane residence up in the middle of the night, Frasier and Daphne have a heart to heart to discuss Daphne’s depression over her loveless love life. When Frasier meets KACL’s charming and handsome new General Manager, Tom, he invites him to dinner with the hope of pairing him with Daphne. The evening seems to be going well until one by one, Niles, Martin, Frasier and Daphne begin to find out that Tom’s actually interested in Frasier.

Flour Child carries on a wonderful start to Season 2. Frasier, Niles and Martin are in a cab when the driver goes into labour. After helping the woman give birth, the trio, including Daphne discuss the beauty of birth. Niles begins to ponder whether he’ll ever become a father and whether he’ll be ready. Frasier recommends Niles carry around a sack of Flour and pretend it were a baby. Meanwhile, Frasier, thinking a colleague was having a birthday, writes an insensitive remark on what turns out to be a “Get Well Soon” card.

Frasier hires a professional Butler, Ferguson, to take over Daphne’s duties now that she is with Niles and part of the family. Ferguson spoils the household with his services and provides insightful advice which helps Frasier rise up the social ladder and join the Opera board. Daphne becomes increasingly frustrated with Mel’s demands on Niles, wondering if they’ll ever be free to express their love. Niles makes a sweeping public declaration, seemingly ending his relationship with Mel forever.

When Daphne breaks up with her boyfriend, a newly-single Niles decides he will finally reveal his feelings to her. Wishing to spare him unnecessary pain, Frasier recommends he waits to do it. In the meantime, Daphne meets a new man while out at a single’s bar with Roz. Except this new man is Niles’ exact double.

Maris returns to the scene and requires Niles’ help dealing with a challenging situation. Niles decides it best to keep her return from Daphne, who is heavily pregnant and highly emotional. Frasier returns to private practice but finds it hard to keep up with a series of comedically challenging clients.

When Maris uses a crossbow to kill her aggressive and violent new boyfriend, Niles is suspected as an accomplice to the murder. Daphne becomes very upset when Maris continually calls Niles from jail. Niles has a mental breakdown after a series of unfortunate events pushes him over the edge.

The Christmas episode from Season 5 is viewed from the perspective of Frasier, Niles, Martin, Daphne and Roz. Frasier accidentally tells Roz’s Mother that she’s pregnant, prompting an argument. Misconstruing overheard conversations, Daphne believes Martin has been giving fatal health news and is terribly upset. Martin must learn how to sing a difficult song as he’s been roped into a nativity play.

Frasier wakes up on his birthday to a small morning celebration. When he tries to blow out a candle, he blows out his back instead. In a lot of pain, he continues with his day but must accept his injury and head home. Niles believes the pain may be brought upon by mental issues and instructs Frasier to list his problems out loud. He mentions that he’s going to miss Daphne and that he loves her. Daphne overhears and misconstrues his meaning.

Frederick, who is now a goth, visits Seattle. Frasier is upset when Frederick doesn’t want to spend anytime with him, instead spending time with a girl. When Martin tells Niles that he never rebelled, Niles decides to eat a pot brownie. Martin accidentally eats the brownie, getting very high in the process.

After finding out Frederick won’t be visiting for Christmas, Frasier has a terrible argument with his Father. He decides not to join Niles and Martin at their cabin for Christmas Day. Instead he’s going to fill in for Bulldog and do his radio show. Frasier and Roz go about the day, hearing from only severally depressed people and have an awful time. Frasier finds himself at a local diner, where he learns the kindness of strangers, misfortunate as they may be.

Niles is struggling to move on from his failing marriage with Maris. Even though separated, he is having trouble projecting confidence and asking women on a date. He eventually invites a woman to an annual dance, “The Snowball”. He receives dancing lessons from Daphne, but when the woman cancels he doesn’t tell Daphne. Eventually, Daphne suggests that she accompany Niles to the dance. The two make a show on the dance floor, sharing an intimate moment at the end. Niles mistakes Daphne’s affections for real emotion.

“Three Valentines” is another classic Frasier perspectives episode as we see Valentines day as experience by Frasier, Niles, Martin & Daphne. Frasier is on a date with a work colleague and he’s unsure whether it’s a work dinner or a romantic dinner. Niles begins to prepare a romantic meal at Frasier’s apartment before things take a chaotic and slapstick-like turn of events. Martin and Daphne sit down at a nice restaurant where a waiter mistaken refers to Martin as Daphne’s Father.

When Niles cancels Valentine’s Day plans with Frasier, Frasier instead takes Martin to the Opera as he doesn’t want to go alone. Frasier has his eye on a lady, Emily, in an adjacent booth. Trying to help, Martin instead catches the eye of her Mother. Not wanting to tell her he’s not interested, he instead pretends he’s gay. Emily proceeds to try and set Martin up with her Uncle.

When Niles finds out that Daphne is dating his divorce attorney, Donny, Niles puts together a plan to try and get him back together with Roz, who was once his girlfriend. Niles invites everyone up to his new Cabin which he won in the divorce settlement – but at different times. Everyone appears on the same night, which causes Frasier and Martin to think that Niles is trying to woo Roz.

Searching for a book, Frasier wonders into Daphne’s room to retrieve it. He gets sidetracked by some of her belongings, when Daphne finds him snooping around. When he realises he has some of her medicine, he tries to sneak back in to put it back, only too once again be caught, but this time as she’s in the shower. Daphne threatens to leave as she doesn’t feel safe or that she can trust him.

To celebrate a station anniversary, Frasier attempts to resurrect an old radio-drama that KACL used to play on their station years earlier. He casts himself as the programs narrative and thanks to his penchant for over-direction, his cast mates begin to rebel.

A slimmed-down Daphne returns from her weight-loss spa to a welcome reception. Niles, feeling uneasy about some of the comments that Daphne’s therapist made to her, acts out and ruins the welcome home. Daphne and Niles attempt to work out their issues, with Niles finally having to admit that despite his beliefs, Daphne isn’t perfect.

Niles decides to finally ask Daphne out on a date, but loses his nerve at the last second. He instead fakes a date with one of his neighbours. Daphne, wanting to help him out, comes to his apartment before the date only to find that Niles hasn’t prepared any food. The two set about preparing dinner, only for the neighbour to randomly stop by.

When Frasier receive a call on the radio from the wife of a Bavarian fencing instructions, whom she suspects to be cheating with a wealthy client. Later, Niles mentions that Maris is taking up fencing, which causes Frasier to believe that Maris is having an affair. When confronting Maris, he accidentally tells Niles about the affair. A despondent Niles attempts to fight the instructor.

The first part of the final episode of Frasier. Frasier is offered a job in San Francisco as Charlotte is about to leave for Chicago. As Daphne’s brothers spend more time around them, Niles becomes worried that his sons are going to turn out like them.

As Niles and Daphne start their lives as parents and Martin and Ronnie are newly wed, Frasier suddenly feels a sense of great loneliness. He begins to question his life in Seattle and whether it’s time for him to move on to new horizons. The family mistakenly believe he is trying to tell them that he’s sick.