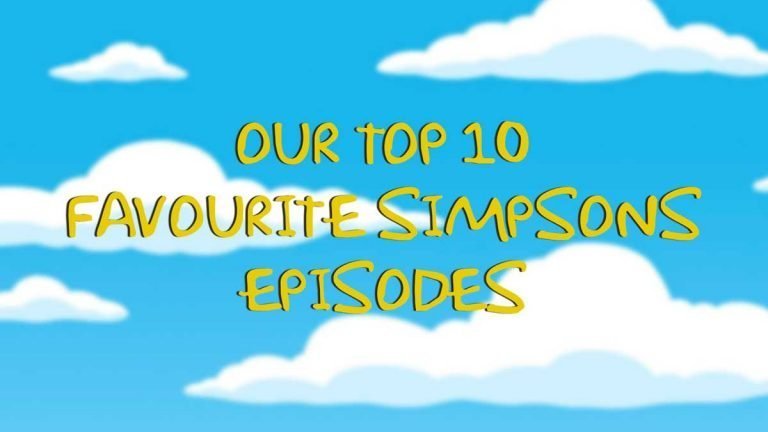 For us, picking the ‘Top 10 Best Simpsons Episodes Ever’, is kind of like picking a favourite parent or child…it’s tough because they’re all great. Well, as long as you pretend the show ended after season 13, like we do.

The Simpsons has been running for almost 32 years and is widely regarding as one of the best shows of all-time. It is certainly the greatest animated show that’s ever been produced.

32 seasons is a staggering feat, which has helped produced one of the largest collections of episodes in television history. General consensus says that the show peaked in its first 12-13 seasons. But that still leaves a huge assortment of episodes to choose from.

In previous Top 10’s we’ve relied on data and ratings accumulated by the general public to determine the Top 10 episodes from any given show – you can see our HIMYM article here. On this occasion, we’ve decided to go with personal preference to determine our Top 10.

This episode was one of our first glimpses into the world of The Simpsons through the point of view of someone who thoroughly despises Homer. We get introduced to Frank Grimes, the Power Plants’ new employee and a character who had to scrape and crawl his way to everything he ever received…and even then it wasn’t much. Conversely, we have Homer, a man who falls into lucky situations constantly.

Naturally, Frank resents Homer and goes about setting up schemes and plots to prove to the town how incompetent he really is.

Favourite line: “I didn’t even know what a nuclear panner plant was.”

9. Marge vs. the Monorail

When Mr. Burns is fined $3m by the EPA, Springfield holds a town meeting to decide what to do with the money. Lyle Lanley interrupts the meeting with a surprisingly catchy song and dance and convinces the town to build a Monorail. Corners are cut throughout development and Homer is tasked with being the conductor. On the first journey the Monorails brake’s are cut and Homer needs to find a way to bring the vehicle to a halt.

I love every time this episode comes on, because you know it’s 20-odd minutes of amazing quotes and one-liners. Without wanting to be contradicted by myself further down this list, I’d say this episode is probably the most quotable of the entire series.

The Simpsons decide to go to Itchy & Scratchy land on a family holiday that Marge’s wants to be problem free…that doesn’t really go to plan.

Whether it’s cat & mouse robots or a ridiculous shortage of ‘Bort’ licence plates, this episodes offers up plenty of great gags.

One of The Simpsons first major dabbles into religion saw Homer decide to stay home from church on a very cold Winter’s day, only to have one of the best days of his life. Homer has a vision of God, discussing his plans to worship him in his own way. He then decides to never go to church again, causing issues between he and Marge.

On another Sunday at home, Homer falls asleep on the couch with a cigar in his mouth causing the home to begin to burn down. Flanders (who wasn’t at Church for some reason?) came to the rescue.

I’m a big fan of early Simpsons episodes. I think the cruder the drawings the more nostalgia I develop. This episode has that in droves, and speaks to their earlier attempts to have more grounder and simpler messages, rather than the more in-your-face style they’ve used in recent years.

Favourite line: “I work hard and I love my kids. So why should I spend every Sunday hearing about why i’m going to hell?”

Ever wondered why the world isn’t full of electric cars? It was the Stonecutters!

Realising that he seems to be the only guy in town who isn’t a part of this secret society, Homer desperately seeks to join The Stonecutters. Although he fails in his attempts, they release his birthmark is that of The Chosen one.

Naturally, Homer really sucks at being the leader and the whole society falls apart relatively quickly. But not before we get some brilliant lines and great songs throughout the episode (see above).

We also see Lenny kick Mr. Burns because he’s higher up the pecking order…i’ll take it.

Favourite line: “Why won’t those stupid idiots let me in their crappy club for jerks?”

After Bart receives blood-written death threats in the mail from Sideshow Bob, Bart becomes paranoid. When Sideshow Bob is released from Jail, The Simpsons go into the FBI Witness Protection Program under the guise of The Thompsons *presses down on foot*.

The Sim…Thompsons relocate and Sideshow Bob hitches a ride with them under their car and immediately begins attempting to kill Bart. When he ties up Bart’s family and corners him on their new house boat, Bart convinces him to recite the score of the HMS Pinafore. Doing so buys Bart time, as the boat drifts in Springfield and allows him and his family to get away.

This is another one of those episodes with an abundance of amazing quotes. This isn’t surprising, as a Sideshow Bob appearance usually improves the wittiness of the shows material; and doing so in the early days was no mean feat. Sideshow Bob’s performance of the score of the HMS Pinafore remains, to this day, one of my favourite Simpsons scenes ever. “I shall send you to Heaven…before i send you to hell”. I mean seriously, they were just on fire in the early days.

Favourite line: There’s a couple…
– “It’s a good thing you drifted by this brothel”.
– “Bake him away, Toys!”.

Homer is suckered into buying a truck from a shrewd sales person and realises he’ll need to begin plowing driveways to make ends meet. After starting to build up a successful business, Barney steals his idea and starts up a competing company. Homer plots revenge by ensuring his competitor is out of town by tricking him into plowing a non-existent driveway, before realising he’s placed his friend in danger.

Homer rescues Barney before the two decide that not even God could stop them from succeeded together. Although, he obviously does, and the snow gets melted away.

I love this episode because it has a bit of good old fashion revenge, some heart, a couple of great tunes and Homer telling a neighbour to “kiss my asphalt”.

Favourite line: “You know those radio ads where two people with annoying voices yammer back and forth? I invented those.” *gets punched*

After perusing the union demands of the Union Leader, who vanished under mysterious circumstances, Mr. Burns decides they demands are far too much and challenges them by revoking their dental plan.

In The Simpsons household, Lisa requires dental surgery, which prompts Homer to be interested in the outcome of negotiations, leading to Homer becoming Union Leader.

After rejecting Mr. Burns attempts to persuade him, Homer, Lisa and the rest of the Power Plant crew stage a protest outside their working walls. Lisa, playing her guitar, sings a magnificent folk song about sticking to their guns to get what they deserve.

This episode has a wonderful message of togetherness and even a very political message of saying, “up yours”, to the hierarchy who try to keep you down. This episode is frequently quoted as one of the best-ever Simpsons episodes, including by Entertainment Weekly, who said in a 2003 article, “this episode is virtually flawless, the product of a series at the height of its creative powers — when the satire was savage and relevant”.

Favourite line: “Sorry, Mr. Burns, but I don’t go in for these backdoor shenanigans. Sure, I’m flattered, maybe even a little curious, but the answer is no!”

Needing to boost their floundering ratings, NASA decide to send up a blue-collared everyman alongside two experienced astronauts on their latest space launch. Homer and Barney are both tasked with proving they are the man for the job. Barney initially wins the contest, but after losing the plot from drinking *non-alcoholic* wine, Homer wins by default.

When he goes up into space, he causes chaos by breaking the rocket door. The crew make it safely to ground with the help of a carbon rod.

I mean, you combine Homer, NASA, Outer Space & a James Taylor cameo and it’s highly unlikely you’re going to get a bad episode. Deep Space Homer is pretty much perfection from the prank calling to begin the show all the way to the heroic carbon rod.

James’ Taylors cameo is awesome and i loved his surprising interaction with Buzz Aldrin. The concept of NASA wanting to improve ratings by sending up a random person into space is also amazing.

Favourite line: “With all due respect, Mr Taylor, this isn’t the best time for your unique brand of bittersweet folk rock”.

So we get to the #1. I’ve read a lot of opinions on this matter and watched many videos, and few have Homer at the Bat as their #1. Although, to be fair, many have the episode in the top 5. For me, it’s hard to go past. This episode has everything. A Homer-centric episode, a star-studded lineup, a great plot, an underdog story and the best Simpsons-created song of all-time.

Mr. Burns telling Don Mattingly to get rid of his sideburns literally never gets old, nor does the site of Darryl Strawberry crying while getting heckled by Bart & Lisa.

The story revolves around the Springfield Nuclear Plant Softball team going on a winning streak and finding themselves in the final game of the season. Mr. Burns and the owner of the Shelbyville Plant agree to a $1m purse for the winner of the match. Determined to win, Mr. Burns enlists the majority of the MLB’s major stars and hilarity ensues.

If asked to recite what my favourite Simpsons episode of all-time was, the answer would always be, “Homer at the Bat”.

Check out ALL our Top 10 Countdowns here.