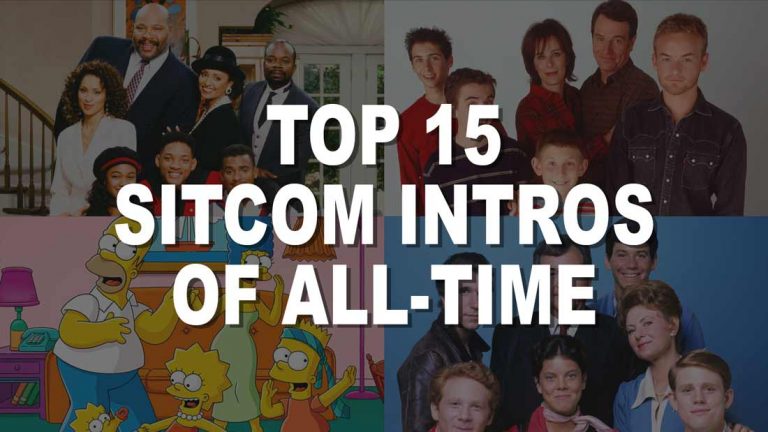 It’s important to never underestimate just how integral a good sitcom intro song/video can be to your overall viewing enjoyment. For new viewers, it’s an opportunity for a TV show to give their audience a snapshot of the shows tone and style. For regular viewers, a good intro provides a welcoming introduction to content that they know and love. Throughout the history of TV sitcoms there’s been some fantastic intros (and some very bad ones).

First, some clarity. When people hear “sitcom” they immediately think of your tradition live audience/soundtrack (multi-camera) style show. While the multi-camera format has certainly been the dominant type, the term “sitcom” merely refers to a situational comedy.

Over the years there’s been many variations, including single camera, multi-camera and even animated shows.

In this article, we’ll be looking at the 15 greatest sitcom intros of all-time, ranked from 15 to 1.

Try and listen to this intro without clicking your fingers. Seriously, try. The Adams Family intro doesn’t have a big chorus or a rousing tune, but it does get stuck in your head. To this day, 54 years since the show finished, every one still knows the tune.

The How I Met Your Mother intro is short, simple and charming. There are no words sung, but it provides the feeling of nostalgia that the show relies on. It also helps create an uplifting tone which was the centrepiece of the shows everlasting humour.

The Office is another one of those shows with a short and sweet intro that relies solely on the music. Die hard fans of The Office will tell you the intro gives them a great feeling every time they hear it. It’s another of these theme songs which is instantly recognisable to even casual viewers.

Arthur is a classic example of a 90’s animated show, made for children, that teens & adults can enjoy. It was a simple family animation about a loveable anthropomorphic eight-year-old aardvark. Despite the fact I haven’t watched the show in 15 or more years, i can still remember the intro word for word, and that’s a testament to how good it was.

The original Seinfeld intro featured Jerry performing his stand up routine to the backdrop of the shows music. This gave the show a unique quality as his routine would change for each episode, often surrounding the events which were about the transpire. Seinfeld later removed the stand up routine in the shows later years. Something which is broadly considered a mistake by the shows fans.

Have you heard the story of a lovely lady and a man named Brady? Of course you have. The Brady Bunch is one of the most beloved sitcoms of all-time with one of the most instantly recognisable themes of all-time. Even if you’re a first time viewer, it does a perfect job of capturing exactly what the show is about.

9. Malcolm In The Middle

One of the most criminally underrated shows of the early 2000’s with a masterpiece of an intro. The intro for Malcolm in the Middle perfectly sums up the teen angst which forms the cornerstone of the shows comedy.

Community’s intro fits the shows tone to a T. It’s fun, it’s quirky and it doesn’t make a big deal of itself. It’s also a really catchy tune which during a binge session, you’ll find yourself singing on repeat.

The Fresh Prince of Bel Air theme is loved for a multitude of reasons. 1). It’s sung by Will Smith 2). It’s super catchy and gets stuck in your head, and 3). It’s one of the best musical recollections of the 90’s that most people have.

The only thing that’s even close to as cool as The Fonz is probably the Happy Days intro. It’s iconic, it’s memorable and after watching the above video, you’ll probably be singing it for days. Also, it’s a great show.

Why yes, Cleveland does in fact, rock. The Drew Carey Show sure put a lot of energy into their intro and it does an awesome job of getting you psyched to watch the show. In fact, I might throw an episode on the tele now.

The Wonder Years was an incredible show with an incredible theme song. It gets props for being the only show on this list with an intro that featured an already mainstream song in the form of Joe Cocker’s, “With A Little Help From My Friends”. Every time I listen to it, it takes me back to when the show aired. For older generations, it’s probably a great trip even further down memory lane.

So, no one told you life was going to be this way, huh? Well, get in line. Friends was a show that an entire generation (and every generation since) could relate to. I mean, aside from the ridiculously large New York City apartments. The intro was a great snap shot into the lives of these 6 friends who, just like the rest of us, are just trying to get by in the big wide world.

Every time i hear the Cheers theme song, i think to myself, “You know what? Sometimes i do want to go where everybody knows my name”. I’m also a huge fan of the old-timely photos on display throughout the sequence. It genuinely makes me want to go back there and celebrate those good times with the people in those photos. Great job, intro song.

You’d have to be a pretty tough judge not to see this one coming. The Simpsons is widely regarded as one of the greatest TV comedies of all-time, with (in our opinion) the greatest intro of all-time. The shows theme is timeless, and despite it’s HD updates in recent times, the sound of the introduction always takes you to a happier place.