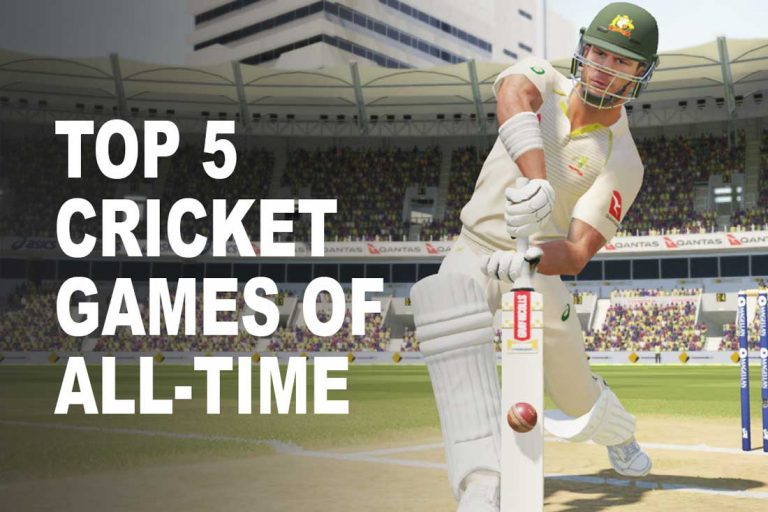 In this article, we’ll be continuing our series of gaming countdowns. This time, we’re counting down the Top 5 Cricket Games Of All-Time.

Over the last 40 years, we have seen well over 20 Cricket games released on PC, MS-DOS or consoles. Cricket games have come in various forms throughout the years and have ranged from some average titles to fantastic games.

Will There Be A Cricket 22?

Over the years, we’ve played every console of PC based Cricket game, including the very early titles such as Graham Gooch’s Test Cricket and International Cricket. Now, without further adieu let’s countdown the Top 5 Cricket Games Of All-Time.

The game was extremely well rounded for the time, with fielding options and the ability to choose where your deliveries would land. Super International Cricket was a success upon release.

Cricket 2005 was the best of the Cricket games developed by EA Sports. The game was fully licensed across the board, which was great for playing full World Cups. My favourite aspect of Cricket 2005 was the ability to create a player, use them in tournaments/series and watch their stats build over time. Cricket 2005 has been criticised for some for its difficult gameplay, but as someone who put numerous hours into mastering the game, i can assure you, at its peak it more than earns its place in the Top 5.

Ashes Cricket was developed by Big Ant Studios as a successor to their successful Don Bradman series. The Don Bradman series revolutionised the way you play Cricket games through an intricate bowling, batting and fielding system that revolves around the thumb sticks. This updated gameplay brought a whole new dimension of skill and fun back to Cricket games and was further accentuated through the delightful Ashes Cricket game.

The game was made specifically for the 2017-18 Ashes Series and was unfortunately only licensed for Australia and England. But thanks to the Internet and clever little designers, the fan hub allows you to update player names, likenesses and uniforms. The career mode within the Big Ant series is by far the most successful and enjoyable of any Cricket game yet.

Cricket 97: Ashes Tour Edition features at the top of this list for one very simple reason: It features the best gameplay of any Cricket game, ever.

Cricket 97 was a revolution of design and gameplay and, to this day, remains an extremely enjoyable game. The manoeuvrability of the Batsman and Bowlers at any stage of the delivery is something that no game has been able to match before and after. Whilst the graphics don’t hold up by modern standards, they were state of the art at the time of release. Richie Benaud’s commentary is also a highlight of the game. His quips and wonderful voice just add to the spectacle of the game.

Do you agree with our list? Let us know in the comments section below.