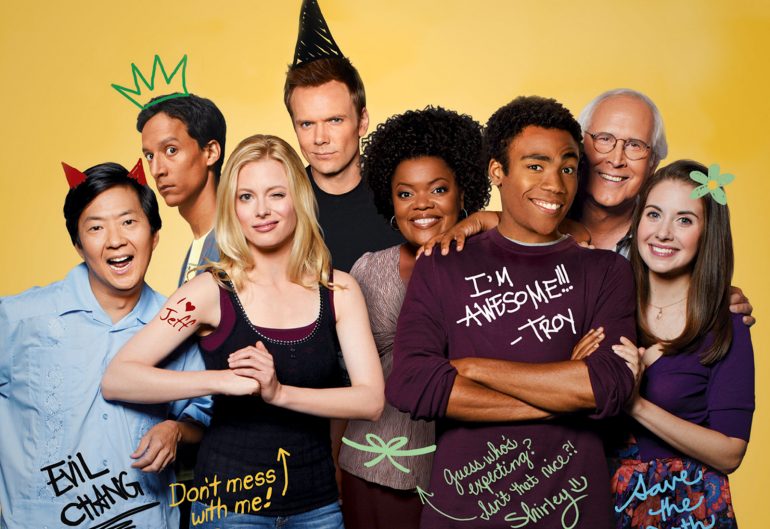 Community, much like The Office, was responsible for a modern reinvention of the comedy & sitcom format on TV. It’s unique format, themed episodes and heavy use of meta-humour won over people from all around the globe.

The Dan Harmon produced show, which first aired on NBC in 2009, produced 6 seasons, the early of which are universally adored and filled with high-quality episodes. The show’s quality did wane towards the back end of its run. However, this was mostly due to back-stage politics and in-fighting between the cast and staff.

Despite the fluctuating quality of early and later seasons, the show produced dozens of amazing episodes, and picking a Top 5 was actually super difficult. Nevertheless, we soldiered through and put together our list of the Top 5 Best Episodes of Community.

5. For A Few Paintballs More

‘For A Few Paintballs More’ was the season 2 follow up to the massively popular season 1 episode, ‘Modern Warfare’. The episode was both inspired by Star Wars and western culture. It saw the study group unite their Community College to fight against the common enemy, the City College.

City College had disguised as a local business, offering up a large sum of money to the winner in an attempt to lure the students into destroying the campus.

Best Line:
Dean Pelton: “That doesn’t make sense, why would someone who gets paid to do things be at Greendale?”

When the study group become worried about the mental state of fellow student, Neil, they invite him to play a game of Dungeons & Dragons to boost his spirits. They leave Pierce out of the invitation, worried that his presence would only hurt Neil’s delicate mental state. Naturally, Pierce pushes his way into the game and attempts to wreak havoc, consistently berating Neil.

This episode is one with a bit more heart than normal. It shows a side of the study group we hadn’t really seen before; genuine care for another person.

Best Line:
Britta: “I wanna know why these goblins are attacking us, maybe these woods are their rightful land and from their perspective.“
Troy: “You’re the AT&T of people”

Filmed in a documentary style, this episode focuses on the civil war that arose from a disagreement between Troy & Abed over pillows & blankets. The United Forts of Pillowtown, run by Abed and the Legit Republic of Blanketsburg, lead by Troy, are at war.

Annie sets up a neutral hospital to treat casualties on either side, whilst Britta tries her hand at war-photography; failing miserably. Jeff, staying out of it for as long as possible, attempts to reunite the two fallen friends.

Best Line:
Jeff: “What’s this?”
Troy: “Latvian Independence Parade. Don’t look at me, they had the proper permits.”

When Abed & Troy move in together, they decide to throw a housewarming party, because that’s what adults do. The gang order pizza and when the doorbell rings, Jeff rolls a die to decided who will retrieve it. This prompts Abed to contemplate the existence of 6 different realities that could now exist depending on the roll of the die.

The episode runs through how each reality would play out; each with vastly different and expanding consequences.

This episode is also famed for introducing the idea of “The darkest timeline”. Which is now commonly used around the internet through memes.

Best Line:
Troy: “Uh, guys? What does a pregnancy test look like?“
Jeff: “Like a thin piece of plastic with a thing on the end of it.“
Troy: “Okay, so this is definitely a gun.“

When Jeff has a nap in his car, he wakes to find the College in ruins; reminiscent of an apocalyptic war zone. Struggling to find anyone, Jeff runs into a paintball-ridden Garrett who informs him of the paintball context.

When Abed comes to Jeffs rescue, he and Troy inform him of the prize, which grants the winner priority registration. They decide to run in a pack, which expands when they meet up with the rest of the study group.

The competition continues to descend into chaos as the day plays out, with the final confrontation coming down to Jeff, Britta and Senor Chang, who the Dean introduced to the game to end it.

Best Line:
Jeff: “Is everyone running in packs?”
Abed: “The debate team was the first to do it, but they fell to in fighting.”