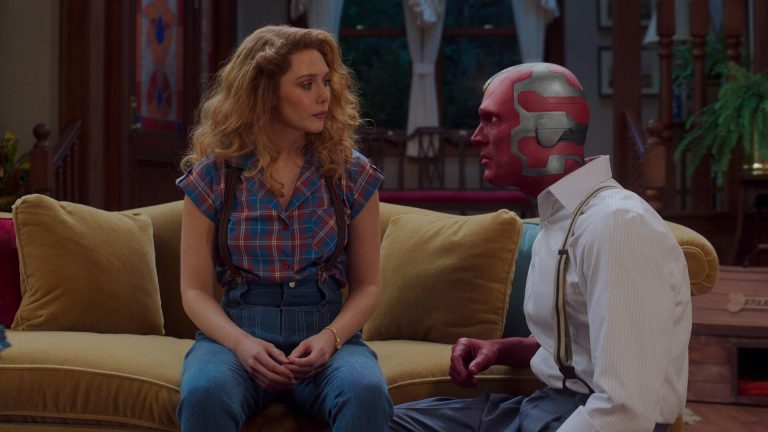 **The following tarticle contains major spoilers for WandaVision and the MCU**

Episode 5 of the weird, yet hugely enticing, ‘WandaVision’, has just dropped on Disney +. As has happened for the last 3 episodes of this sitcom-inspired, brain-melting TV series, the final scene of Episode 5 left us with a lot to chew on for the next week.

Episode 4 gave us a stronger glimpse into the inner working of this wacky Westview anomaly. In fact, the SWORD operatives have given it the name, “The Maximoff Anomaly”. Over the last 2 episodes it’s become clear that Wanda is in control of the people and town of Westview. Her powers have clearly grown to stratospheric heights as she seems to be able to control, animate or create just about anything.

However, not a lot could have prepared us for the final scene of Episode 5, and to be fair, even Wanda appeared confused (more on this later).

Wanda opened the door to find none other than her brother, Pietro, standing in front of her. But to Wanda’s and everyone else’s shock, Pietro, both in the show and in real life, had been recast. Standing in front of Wanda was none other than ‘X-Men: Days of Future Past’s’, Evan Peters. Thankfully, Dr. Darcy Lewis quickly confirmed that this wasn’t one of the classic film recasting moments that occur due to financial or creative differences. No, no. This was Wanda (or someone else?) recasting Pietro within the MCU.

What Does Evan Peters Presence Mean For The MCU?

Let’s straighten one thing up straight out of the gate. This IS NOT the Quicksilver from the Fox movies.

It may look and sound like him, but the fact is, Peter Maximoff lived a vastly different life to Wanda. In fact, he’s several decades older, as well.

His presence opens up one of two possibilities.

Firstly, Pietro may have been brought back by whoever (if there is someone) is doing this to Wanda. It may be just another form of mental torture to bring her brother back, but not as she knows him. If this is the case, it would allow the full cast of Fox’s X-Men to come into the MCU, without bringing any of their past experiences to the table. This would give the MCU a clean slate when it comes to storylines.

Secondly, this could be the first inkling that the Multiverse is in full swing. Perhaps this Pietro is in fact her brother, but simply from another universe. Since ‘Dr. Strange and the Multiverse of Madness’ is set to explore many of these possibilities, option 2 is not completely unbelievable. This would also be the more seamless alternative as, again, it opens up the potential for the MCU to introduce the X-Men. It would also explain why they haven’t been around for any major world events over the past 15 years.

Is Wanda Actually Doing This?

Well, she definitely appears to be controlling a lot of it, but I find it hard to believe that she’s capable of ruining hundreds of peoples lives because she’s sad. Since I seriously doubt that Disney/Marvel has plans for Wanda to go full Darth Vader and become an Uber Villain, you would have to imagine there is a dark force behind Wanda’s actions.

Since WandaVision started there have been several Easter Eggs that point to the continued presence of Hydra in and around the MCU. Could our villain be a Hydra agent who is deep undercover in this melodrama?

There is also Tyler Hayward, who seemed like a standup guy in Episode 4, but started doing and saying some uncool things in Episode 5. I’d be keeping Nick Fury’s good eye on him in the coming episodes.

One thing is for certain. After a moderate start, WandaVision is most certainly starting to turn the heat up and I’m super excited to see what’s next.