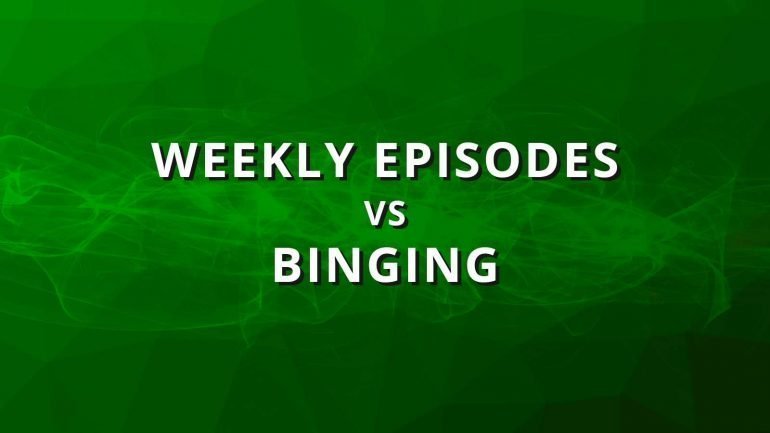 Weekly Episodes vs Binging – Which Is Better?

Once upon a time, television was a simple beast. We were dictated to by the powers that be, constantly craving for another hit of sweet, sweet TV goodness. However, the tables have most certainly turned. Although the days of free-to-air television are coming to an end (and agonisingly slowly, at that), our choice in TV has never been greater. Streaming has become the dominant force in television. Our favourite TV shows and movies are now brought to us through the internet, straight to our delightful, rectangular shaped picture boxes.

The streaming wars must surely be at their peak. Although I’m sure there will be more platforms that come and go, we now appear to have a collection of our main players. There’s Netflix, Disney+, HBO Max & Amazon Prime. Of course, depending on your country, there will be plenty of other offers. For instance, in Australia, we have Binge (basically HBO max-lite), Kayo (sports streaming) & Stan. These services will never definitively beat out the big players, but it’s nice to have some local variety.

We are now an on-demand society. The internet has provided us the freedom of dictating our own schedules. This means that, until something better comes along, streaming services are here to stay.

Now that we’re all on the page with where TV currently stands, we have one important question still to ask. Which is better – weekly episodes or binging the whole season?

Ah, yes. The question as old as time itself. For I believe Plato once sat down with Socrates and discussed the merits of dropping every episode of the season in one go. Naturally, Socrates was firmly against this idea. He felt you needed to earn that release of endorphins, gradually over time.

Whether or not what I just said is factually correct is totally irrelevant. What matters is that the question is so heated, even our greatest philosophers are willing to discuss it. So let’s dive into the debate and look at the strengths and weaknesses of each option.

The biggest pro in the weekly episode format is that audiences over a particular age are already well engrossed with this concept. As we mentioned earlier, there was a time, not all that long ago, in which this was our only way to consume new television.

Think of the great sitcoms of our time, or the incredible dramas that have been produced. Almost all of these worked off a weekly episode format.

The big benefit? You pull the viewer in to want more and more each week.

In stand up comedy, the all-time greats speak of the need to leave the audience wanting more. You don’t blow your best jokes at the start of the set. You build over time, and let the audience warm up with you. Then, when you’ve got them right where you want them, you say “goodnight”, and let them know you’ll be back next week.

It’s no different in television.

The benefit of this format almost always lays in the social aspect. We’ve all heard of gathering around the water cooler. Usually, television was the hottest topic of conversation.

Of course, these all came at the end of the season. But it doesn’t change the fact that the biggest, grandest moments of shock would always leave us with plenty to talk about for the next week (or summer).

Now, the advent of streaming services brought about an array of new formulas. Among these, was the act of dropping an entire season of a new show in one go.

Of course, when Netflix first launched its streaming service, it didn’t have that many brand new programs. Over time, their catalogue of original content has increased. As has the desire for studios to place their new shows on the service.

At one point, Netflix held an incredible monopoly over the world of streaming. That has changed quite dramatically, although, Netflix remains the dominant entity.

Dropping an entire season in one go used to work great for Netflix. It made fans happy, and didn’t change the amount of money they made, as viewers weren’t going anywhere anyway. However, with the plethora of new streaming services around, Netflix has had to alter this philosophy. The streaming giant (and all the others) needed a way to keep viewers engrossed for longer periods of time.

So what was the answer? The old ways. What a shocker.

The issue is that when the streaming services reverted back to weekly episodes, they didn’t consider that the market was now already familiar with binging an entire season. As it turns out, humans love instant gratification. Additionally, we loathe unnecessary waiting.

So now streaming services are locked in an endless tug of war with their consumers, unsure of what their next move should be.

Which Is The Winner?

Having lived through the era of weekly TV, and now having experienced the thrill of binging a great new show, I’m feeling just like Natalie Imbruglia. I’m torn.

I can truly see the merits of both formulas, but I keep coming back to the same argument.

When TV consisted of only a few major networks, the quality of television, on average, was substantially better. Now, there are, of course, some excellent shows, but there are also a huge amount of distinctly average TV series. It’s not a huge surprise. Streaming services are going for a quantity over quality approach. Additionally, there are only a finite amount of high-end directors and producers capable of putting together engrossing stories.

What this leaves us with is a smorgasbord of shows, some of which are not good enough to capture our attentions over a long period of time. In this instant, streaming services must be acutely aware of a shows quality. In the event the show isn’t of AAA standard, they must drop it in one go and allow fans to enjoy the show at their pace. As I see it, this is the only option.

On the other hand, when debuting premium content, I see no problem in providing the episodes on a weekly schedule. After all, people want to discuss the big shows. It’s a great way to build a rapport with family, friends and colleagues. Talking about a whole season in one go can be a little overwhelming. Providing us with 10-20 weeks of talking points? Jackpot.

If I had a gun to my head, I would choose to binge a TV show. The only reason I’d choose this is because I feel the quality of programming in general does not live up to the need to wait. More often than not, a show will drop an episode that just kind of sucks. In those instances, I would much rather move on quickly, rather than wait another week and risk losing interest entirely.

Weekly Episodes vs Binging? Which do you prefer?

This is a fantastic topic of conversation and I’d love to know what you think. If you have any counter points, or additional thoughts, leave them in the comments section below.