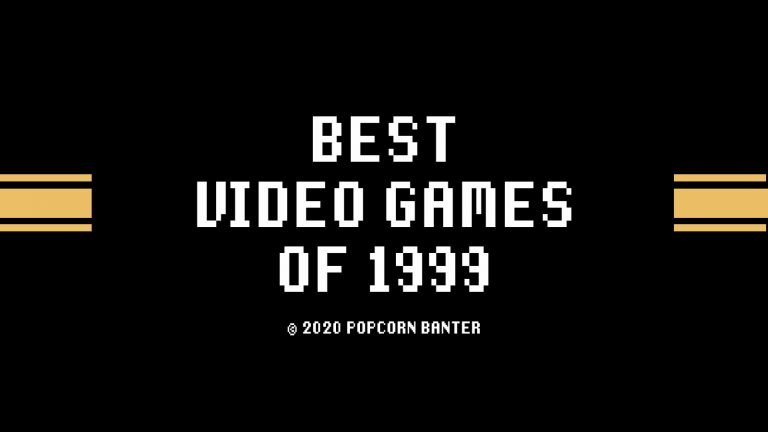 For a lot of us the 90’s were a transformative decade. And that’s doubly true when it comes to gaming. Gaming in the 90’s made the transition from the 80’s arcades to household consoles. Most people by 1999 had their first gaming console in their house, and the games being released were like nothing we’d ever seen. This is not to mention the emergence of handheld gaming, which was in it’s very early stages.

In the 90’s we became glued to our tv’s with every new release. For the first time, these games stole many an hour of sleep.

Let’s take a nostalgic look back at the year that capped off the 90’s.

Many notable games were released in 1999. Some of these games fizzled, while some maintain a cult status to this day. Many of the games listed kick started franchises that are still alive now. Here is our list of The Best Video Games of 1999.

1999 started with an absolute bang as the original Super Smash Bros. was released on Nintendo 64. Way before Avengers Infinity War was even dreamed of, Nintendo were the pioneers of the greatest crossover events of all time. Super Smash Bros. was every gamers dream, and the answer to the age old question, “who would win in a fight between Mario and Pikachu?”. This game was also a fresh look at fighting games with Tekken, Street Fighter and Mortal Kombat all having very similar play styles.

Not only was Super Smash Bros. revolutionary, it has since spawned new editions with each passing Nintendo generation. As of right now there are 5 installments of Super Smash Bros. The most recent of which has an entire community of competitive players, and is one of the most popular competitive fighting games in the modern era. As successful as it’s later titles have been, the original game still holds up to this day and continues to be the go to party game for when someone dusts off their Nintendo 64.

Nintendo continued thier reign of dominance with this title in Feburary. Aptly named ‘Mario Party’ this game was the perfect game for a few friends to get together and play. Resembling a board game at its core, this game also threw in multpile ridiculously fun mini games all of which get the competitive juices flowing. Although you could play this alone, the crew was needed to get the best out of this title.

With 11 titles in the Mario Party franchise, it’s argued that the best games came earlier in the timeline. Regardless of your view, the title that started it all set the standard for the anthology to follow. It’s impossible to play this game with your friends and not have a great time. It does test some friendships, as teaming up on a single player is sometimes encouraged, and tempers can flare if someone gets to that star when you were only one roll away!

In 1999 skateboarding was all the rage. Just cast your mind back to 90’s style and a lot of it was inspired by the “skater look”. What better environment is there to release a game based around the sport of the time, with the most well known name in the sport as the mascot. The timing to get this game out there was perfect, but the hype didn’t stop there. The game itself was a masterpiece in its simplicity, leaving no man behind with its entry level controls and concept. It’s easy, jump on the board, do some tricks, defy gravity as we know it and get some high scores. All backed with some of the best punk rock soundtrack for the time adding to the teenage angst factor.

The game spawned its own multitude of sequels and spinoffs, however not all of them were hits. Once Neversoft stopped making titles and Robomodo took over the love had really dwindled and the only people who were playing were only doing so out of respect to the earlier titles. However we are in a glorious time in the modern era, where older and popular games are earning modern remakes. This game and its immediate successor are being remade and although at the time of writing it’s too early to speak to the quality of the games. Things are looking promising for a resurgence in the series once again.

Madden NFL is a series that many continue to look forward to each year. This is one scenario where it didn’t exactly start in 1999 (staring instead in 1988), however this title did carry things along nicely. It was also the first title to have a release on Game Boy Colour, which was growing in popularity at the time. At this time Madden franchise already had it’s loyalists and the game was reviewed well amongst the fan base. The handheld version, restricted by the technology of the time however didn’t have as strong a release.

Before the days of microtransactions and look boxes, Madden was a fun game for any NFL follower. Allowing fans to live out their dreams and take control of their favourite teams. This amongst other emerging sporting titles of the time was the beginning of a major genre in gaming that continues to run strong today.

Crash Team Racing was Sony’s entrance into the mascot racing…. uh race? With the popularity of Mario Kart for Nintendo 64, Sony saw an opportunity to get in on the action with their own mascot driven title (no pun intended). Welcome Crash Team Racing (CTR). This game provided the hours of fun both solo and multiplayer that the Playstation crowd were looking for. Although it ultimately fell well short of the heights that Mario Kart got to with no spin offs or sequels to it’s name that didn’t diminish the fun that was to be found here.

The game has its own cult following among Sony loyalists, with that inspiring the 2020 remake. Unfortunately modern gaming studios fall victim to the trap of microtransactions and unnecessary DLC. The original game although somewhat inspired by another title still had enough originality and heart to differentiate it and playability to entertain us for hours on end.

Pokemon would have to be one of, if not the most successful and profitable properties in the world right now. The concept is simple. You create a team of cute pocket monsters, training them to become beasts with their own strengths and weaknesses. Take on challenges that get progressively harder as the team gets stronger working synergistically towards the goal of becoming the ultimate champion. It was a concept introduced to us not many years earlier in Pokemon Red and Blue. These games took what was great in the originals and built on it. With each release adding more pokemon and challenges for the player to overcome.

In many ways more recently the series seems to have lost its way. What we got was more hand holding and distractions from what the original goal was. Pokemon Gold and Silver are still looked back on to this day as the greatest generation of Pokemon games. And that’s no small feat considering how many titles have been released. These games were the height of a prestigious line of games, being true to the foundations that it’s built upon without the complications that cloud the direction the series is going.

Donkey Kong has come a long way from throwing barrels at Mario in 1981. Over the years he has become a fully fleshed out character. Being transformed mainly from a villian to a hero alongside Mario. This started when he received his a title of his own ‘Donkey Kong Country’. A 2D platformer for GBA and SNES. Donkey Kong 64 however added depth and breadth to the Donkey Kong mythos by introducing us to his whole world. Unreal 3D graphics and the closest thing we had to an open world game at the time, this title was a revolutionary change in the gaming timeline as a whole.

To this day this game has its own cult following, and is particularly popular among speedrunners. The characters introduced in this game gave Donkey Kong a supporting cast of his own. Although we don’t still see many of these characters, the popular King K. Rool made an appearance in the recent Super Smash Bros. Ultimate as a playable character. At the end of the day, what we got with this game was an enjoyable must have for Nintendo users.