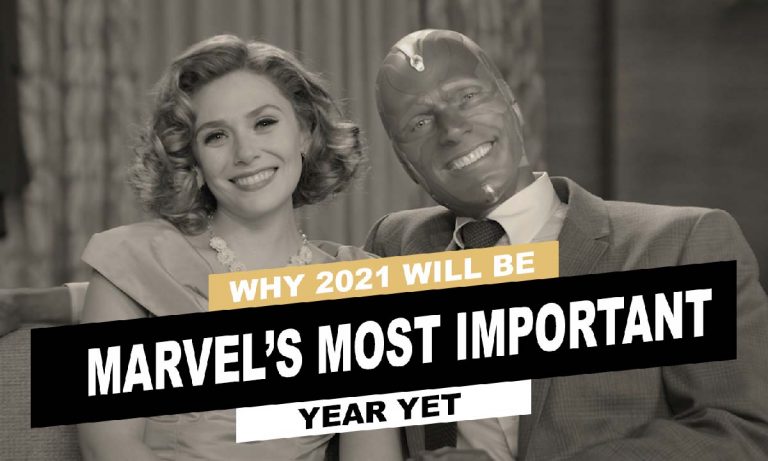 Why 2021 Will Be Marvel’s Most Important Year Yet

2021 feels like a year to reset. Sure, the effects of COVID-19 still run rampant around the world, but thanks to the vaccines (and some incredibly intelligent and tireless scientists), we can finally see the light at the end of the tunnel.

I’ve mentioned plenty of times throughout my articles (as has every other entertainment commentator) that COVID-19 played havoc with the TV & movie schedules of 2020. This wasn’t surprising, as the health and well-being of people must come first, no matter how inconvenient it is for those who want to watch their favourite programs or movies. If we were to find a silver-lining to any of the above, it would be that we now have a veritable smorgasbord of quality programming heading our way in 2021.

This brings me to Marvel. For the first time since 2009, there wasn’t a single Disney-made, Marvel Superhero film released in an entire calendar year. It’s seems remarkable to think that a studio that has been dropping billion-dollar movie bonanzas for fun wouldn’t release a single movie in a whole year.

Well, as anyone who would consider themselves a fan would know, Black Widow was of course supposed to release in 2020. Unfortunately, the lengthy unavailability of cinemas around the world meant that Marvel/Disney chose to push back their schedule.

The length of time between movies has left us fans around the world beginning to question the non-stop superhero gorge that we’ve been taking part of for the last 20 years. It’s been a wonderful journey, but is there a chance (and please don’t hate me for pondering this thought) that the superhero phase could be on its last legs?

No matter what your opinion on the matter is, 2021 shapes as an absolutely enormous year for Marvel (and Disney). Here’s why.

The Success Of The TV Shows Is Still An Unknown

For part one of my lengthy, rhetorical thought-experiment, i’d point you towards what is currently a great unknown; will Marvel’s TV shows work?

From an outsider’s perspective, it seems like a stroke of pure genius from the powers-that-be at Disney. With the upcoming onslaught of MCU-based TV Shows, Disney is ensuring:

But most of this will only be the case if the content their developing is actually good. History would tell us that when creative minds are more focussed on quantity than quality, people’s care levels begin to dramatically fall away.

To further illustrate my point, i’m going to assume the identity of Negative Nelly (alternatively known as Nelly Negatron, depending on my mood).

*Control has been assumed*

My biggest concern for the success of the MCU-based TV shows is that, with the exception of The Falcon & The Winter Soldier, there isn’t enough firepower to keep people interested in these shows long term.

I mean, I enjoy the Wanda character (and i guess Vision is okay), but do I really care about what happens to them? Nah, not really. I quite obviously haven’t run the stats on this, but i’d be willing to bet the majority of Marvel fans probably feel the same way. A similar argument can be made for Hawkeye, Ms. Marvel (however, these won’t air until late in 2021).

This is where things become interesting, because WandaVision is the first cab off the rank for Marvel/Disney in 2021. If WandaVision is a flop, well, MCU TV is off to a very bad start.

The Falcon & The Winter Soldier is undoubtedly the show that everyone is most excited for and, of course, the hardcore fans will 100% be there to watch it. But does Disney risk the casual fans falling away if WandaVision doesn’t work for them? I guess only time will tell.

Scarlett Johansson’s Black Widow movie will finally air in 2021. I think we can all agree that she has earned this movie and then some through her remarkable performances as Natasha Romanoff in a multitude of MCU films. The only problem? It’s about 4 years too late.

*Spoiler alert* for that one guy in the world that hasn’t seen Avengers: Endgame, but Natasha is dead.

She heroically gave her life so that the universe could be saved during the events of Avengers: Endgame. Therefore, Black Widow will be set in the past, taking place in the two years between Captain America: Civil War and Avengers: Infinity War.

There’s nothing inherently wrong with this style of movie. Afterall, many great films have followed this construct. The issue with Black Widow is that MCU fans are used to each film progressing the overall story arch. This is an interconnected world and Disney/Marvel have done a wonderful job of training us into expecting and enjoying a certain type of film. Now, i’m not saying we won’t enjoy Black Widow, but the unique aspect that makes MCU films so enjoyable is now gone. Everything that Black Widow could tell us, we do, or at least should, already know.

Additionally, and this is actually pretty crazy, when Black Widow is released, it will have been 22 months since the last MCU film. This gives Black Widow a HUGE mountain to climb, because it now has to be good enough to restart the momentum that came from the back of Endgame and Spider-Man: Far From Home.

This is an argument i’ve read many times, and one i’ve had with many of my friends. It’s not specifically about Avengers: Endgame, per se, but rather the completion of a 11 year, 22-film story arch that made your knees weak. The Infinity Saga (despite it’s rare follies) was a masterful piece of superhero storytelling. It brought together a live-action world we never would have dreamt of as children and brought grown men to tears (watch Kevin Smith’s reaction after watching the film – he’s awesome).

And therein lies the problem.

Regardless of whether Marvel want to do another similar story-arch with a big-time villain or whether they want to go in a completely unique direction, they somehow, someway, have to live up to the overwhelming expectations that the Infinity Saga has levelled upon moviegoers.

Additionally, all of this will have to be done without their A-list stars Robert Downey Jr., Chris Evans, Scarlett Johansson and Chadwick Boseman.

It will take nothing short of a Herculean effort to pull fans back off the carpet (you know, because their knees buckled ^) and go,

My fear is that the fans will inevitably say,

I’m brought to my last point and I think this one may be the biggest.

For clarification, I am an enormous superhero fan. You only have to look at the types of content that are regularly posted on Popcorn Banter to realise I obviously favour one form of entertainment over others. But I fear that we may be reaching a level of over-indulgence that I had hoped would never happen.

“Too much of a good thing”.

There’s so many cliches that tackle this very topic and as we all know, cliches are cliches for a reason. At this stage, Marvel and DC are essentially treating us as a piece of canvas that was recently purchased by Jackson Pollock. We are having movies and TV hurled at us from every which direction and the expectation is that we will just sit there and like it.

However, unlike the canvas, we have the ability to go, “actually, could ya not?”.

I’m concerned that this is just around the corner for superhero and casual fans alike as new movies and shows continue to be announced, almost weekly.

What would I do? Gee whiskers, I’m so glad you asked.

Well, for starters, i’d dial everything back a notch. I really don’t see a need for a Hawkeye or Loki series (even if they’re terrific). Ms. Marvel is certainly a character of the future, so developing her away from cinema audiences is likely a good call. As for She Hulk and Moon Knight? Well, they could definitely end up being great characters, but they could also end up just being a part of the noise.

Additionally, I don’t think scheduling 4000 new films and TV shows 6 years in advance really works for anyone. Things move so quickly in the film industry, and as we have seen from Warner Bros., often 1 or 2 bad films can completely derail your entire slate.

As our aforementioned cliche pointed out, less is certainly more and I think Marvel/Disney (as well as WB) need to realise that the fans come for the quality and we will absolutely leave when it continuously falls.