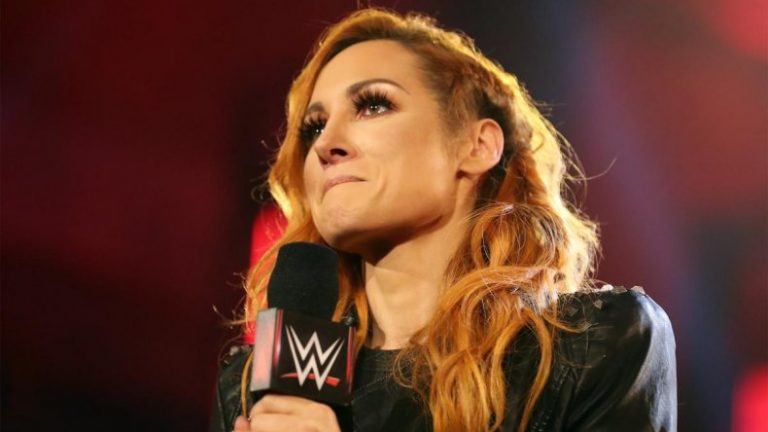 The Monday night after 2020’s Money in the Bank PPV has definitely been a memorable one. We were given the joyous news of a baby on the way for a WWE power couple, a weird explanation for why Rey Mysterio & Aleister Black aren’t dead, and a Claymore so good i’m pretty sure my TV shook a little bit.

Becky Lynch Announces Her and Seth Rollins Are Expecting A Child; Relinquishes the RAW Women’s Championship.

Becky Lynch Announces Her and Seth Rollins Are Expecting A Child; Relinquishes the RAW Women’s Championship.

Becky comes down to the ring holding the Money in the Bank briefcase and announces that she’s both ecstatic and sad. Becky says that she asked WWE management to up the stakes of the Women’s Money in the Bank match from the previous night. Asuka comes to the ring and exclaims that the briefcase is hers. Becky tells her that that’s correct and that last nights match was actually for the RAW Women’s Championship. Asuka loses it and celebrates wildly. They both embrace and celebrate.

Bit of a squash match despite some small offence from Humberto. Match was used to signify that Lashley will be using the Masterlo….Full Nelson from now on.

Garza beats Tozawa via the Wing Clipper. Stares down Theory at ringside.

After the match, Garza and Theory continue arguing as WWE Champion Drew McIntyre comes down to the ring. The champ issues a challenge to all three men before nailing a huge Claymore on Austin theory. He then Claymores Angel Garza, issuing a challenge to Andrade, telling him to “be a man”.

Back and forth match for a little while before the Champion overpowers Andrade. He hits an Alabama Slam and then follows it up with another big claymore for the 1-2-3.

Drew Mac gives a small promo, talking about his match with Rollins at MitB. Tells the cameras that Rollins brought his A-Game but that he was ready. He announces that Smackdown and RAW superstars will now be able to fight each other across brands. Says that next week it will be Drew McIntyre vs. King Corbin and that he has a good ol’ fashion claymore waiting for him.

Alexa Bliss and Nikki Cross vs. The IIconics

Good to see the IIconics back. Billie Kay got Bliss with a hit to the throat and then a double team slam for the pinfall win.

Filing this one into the “didn’t need to be done” section. Rey Mysterio gives a backstage interview stating that he’s alright and that even though he fell off the roof he managed to land on another one 6 feet below. WWE either doesn’t respect the intelligence of their audience or didn’t care enough to come up with a good reasoning for why he and Aleister Black aren’t dead.

Rollins interrupts. Rey congratulations him on becoming a Father. Rollins stares at him before walking away. Mysterio calls him a dick.

R-Truth hands the referee some fake dentures that are truly horrifying. This distracts MVP, letting Truth hit the Lie Detector for the win.

After the match, Lashley comes to the ring and destroys truth. Tells MVP that they need to talk and the two leave the ring and head backstage together.

Despite seeming to be a heel when he returned a couple of weeks ago, Jinder gives a very face-ish promo. Tells us he’s on a journey to redeem himself and that his journey will be “a hero’s journey”.

Shayna says it was stupid of Becky to get knocked up when she is the champion. Calls her unborn child a “parasite” and says Lynch will be reduced to a fat slob. This was actually pretty good stuff. Solid heel work from Shayna.

Rey Mysterio and Aleister Black vs. Seth Rollins and Murphy

Rollins got himself DQ’d by intercepting a 619 attempt after standing on the ring apron the entire time and not getting involved in the match. It will be interesting to see where this blank stare persona goes.

After the match, Rollins attacks Mysterio, targeting his eye. He yells at Murphy to stay out of it and he tries to rip Mysterio’s mask off. Officials separate the two.

Backstage, Rollins ask how Rey is unsure what happened back in the ring. Black starts brawling with Murphy.

I guess since Vince’s dream of the XFL didn’t quite make it (twice), he now wants to try his hand at basketball. This odd segment ends with The Street Profits winning 74-2. At the end of the match the Raiders say they let The Street Profits win. They begin taking shots and nailing every shot they take.

Before the match Natalya tells Shayne she’s going to teach her a lesson for her uncool remarks about Becky earlier. In the end, she doesn’t Baszler with a big knee strike and a pinfall victory.

Corbin says that Rey and Black are both lucky there was a roof there to stop their fall (sigh). Gives a fairly stock standard heel interview. Says he’s going to teach McIntyre a lesson next week and that he’ll have to bow down before the king.

Orton says that if Edge has the guts, at Backlash it will be Edge vs Orton in a traditional wrestling match. Charly Caruso asks Edge if he has a response to which Edge doesn’t reply. RAW goes off the air.