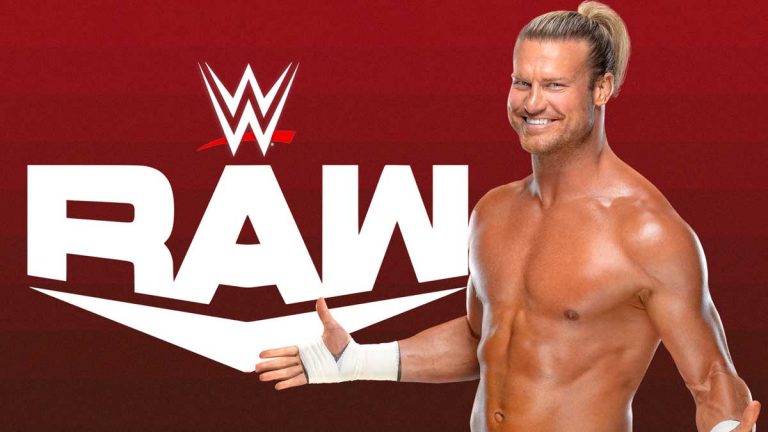 In the midst of a ratings slump, WWE’s flagship program pre arranged a few title matches to get the fans excited about tuning back in. These include:

It was however the action outside the ring that proved more exciting and gave the fans an excuse to come back next week. With Rey Mysterio’s long awaited return, along with Edge delivering another great promo, this episode really did its best given the times we’re in, to deliver the best show possible. But hey, at least there were no flying jars of piss anywhere in sight this week.

Dolph Ziggler made his RAW debut, challenging Drew McIntyre for his WWE Championship at Extreme Rules

In a call back to AJ Styles recent trade to the blue brand, Dolph Ziggler interrupted Drew McIntyre’s show opening promo to announce that himself and Robert Roode were the ‘future considerations’ traded in return. Ziggler, not to be put off by recent form, invited himself to be the next challenger for his old partners world title. McIntyre reminded old Ziggles that he hasn’t been on the winning side of many fights since the two parted ways, and pointed out his entitled ways, before accepting the challenge.

It looks like we are getting Drew McIntyre vs Dolph Ziggler at extreme rules, which on one hand could be a great feud working on the history the two have together, and these two have the ability to have some great matches. On the other hand however it’s hard to justify Dolph Ziggler getting such an easy shot at the title after not exactly earning it, leaving us with whiplash with how quick they have moved on from Bobby Lashley.

Nia Jax started this segment in the ring, throwing shade at Charlotte Flair who was ‘gifted’ a RAW Women’s title match this week. R-Truth at this point made his way to the ring to announce his 24/7 championship match with Akira Tozawa later tonight, accusing Jax of being Tozawa in disguise. The ninjas that have been rampant in recent weeks then surrounded the ring and chased off Truth, leading to Charlotte Flair making her way to the ring. Flair went on to say that Nia Jax was having a tantrum because she ruined her chance at the RAW Women’s title. The two had a bit of back and forth before a brawl broke out between them injuring Flairs shoulder.

If this sounds messy, it’s because it was! The R-Truth and the ninjas part was very out of nowhere, with no real point. The injured shoulder of Flair seems to be the only real takeaway from this promo, which Flair did confirm would not stop her from challenging for the Women’s title tonight.

The Match that has built to for weeks of silly competitions is finally here. The two teams began the match by brawling backstage, finally making their way to the ring. The match that went for a total of about 10 minutes was a pretty okay tag team title match. At one point the Street Profits hit Erik with a ‘Viking Experience’ stolen signature move leading to a near fall. The end came after Ford hit a frog splash on Erik for the win.

After the match Andrade and Angel Garza mounted an attack that laid out the current champions before the Raiders ran out for the save. The Zelina Vega group, who have been on rocky ground lately made their intentions to go after the Tag Team Titles clear, apparently having put their differences behind them. Somewhat of a disappointing end to the rivalry that seems to have gone on forever between the STreet Profits and Viking Raiders, however this new challenger setup, whilst not surprising could lead to some great matches.

These two have serious chemistry in the ring, and this was a perfect example of how well they know each other. Flair’s taped up shoulder was a constant target for Asuka, with persistent attacks to the injured area. Flair turned it around at one point with a powerful spear, followed by a sit out powerbomb. Asuka proved too much however with a clean win in the ring with the Asuka lock.

A good TV match with a clean finish, very rare on RAW was a breath of fresh air. Flair still protected by not being 100% going into the match is what is to be expected. Jax adding insult to injury later on in the night attacked Flair mid interview damaging the shoulder further, planting seeds for this feud to continue.

Edge delivered a promo calling back to their match at Backlash. He says he almost had Orton until Orton ‘accidentally’ hit him with a low blow. He went on to say that his actions against Christian has awoken the ‘Rated R superstar’ as opposed to the ‘Rated PG superstar’ we have had since he returned at the Rumble. Not doing this promo justice, this needs to be watched to be fully experienced. The main gist being that Edge vows to beat Orton, not just by winning against him, but by humiliating him, by any means necessary in the opportunistic ways he had become famous for.

Orton in response said that when a viper feels cornered they tend to strike, and Edge doesn’t want to get in the way of that. He continued to say that he doesn’t care what Christian and Edge do, so long as they do it far away from him.

The experience of these two guys is really on show in these two promos that really need to be watched to be experienced. This feud is clearly not over yet, and this is the breath of air that it needed.

Bobby Lashley and MVP began the match at ringside chasing off all of Tozawa’s ninjas. Lashley clearly with a bone to pick from last week then locked in the Full Nelson onto R-Truth leaving him laid out in the ring. After Lashley and MVP left Tozawa came out from under the ring taking advantage of the attack on Truth and scored the pinfall win.

Not a lot coming from this segment besides a new 24/7 champion. The feud between Lashley and Truth may not be over yet though. We will have to see where they go with this.

A very fast match here, mainly serving to draw attention to the new pairing between Natalya and Lana. Mostly a squash match with a small comeback from Liv Morgan who was immediately distracted by Lana and fell to the sharpshooter submission hold.

This new pairing could be the thing Natalya needs to get back some form and possibly into the title picture again. Liv Morgan is in a bit of a slump lately which is a shame considering the emphasis WWE put on her return only a few months ago.

Before celebrating Orton, Ric Flair was in the ring and issued a warning to Nia Jax in regards to her attack on his daughter. Then the ceremony was underway with Flair praising Orton and his ruthlessness and his elite skills in the ring. The two then remembered the attacks on Edge and Christian claiming it was just examples of their superiority in the ring. Soon after The Big Show’s music hit and he made his way to the ring interrupting the two saying they have hurt his friends and he will make them pay.

Orton returned fire saying that if The Big Show is to challenge him, then he will have the same fate as Edge and Christian before him. He didn’t stick around long to back up these claims however, as he rolled out of the ring away from the giant and returned to the backstage area.

A super short match here, saw the current cham[ions retain against The Iiconics after Sasha Banks locked in the Banks statement for the win. The match itself was more of an entrée to the real story they were trying to tell here. Bayley came to join Banks to celebrate the win just before Banks grabbed the mic and expressed her jealousy towards Bayley when she calls herself Bayley Dos Straps. Just when it looked like this could be the split we have all been waiting for Banks issued a challenge to the Raw Women’s Champion Asuka for a title match at Extreme rules. Asuka made her way to the ring to accept the challenge making the match official, before she was caught off guard by an attack from Bayley. Banks then hit her with the Banks statement sending a message to the champion.

The Iiconics were a bit inconsequential here, only serving a bigger storyline. This however looks like WWE are investing hard in the imminent split between Bayley and Sasha Banks, which can only be a good thing.

The match was preceded by MVP’s VIP lounge with Crews as the guest. MVP let Crews know that he was done trying to recruit him and instead is coming after him and his United States Title. Crews was busy listening to MVP when Shelton Benjamin took advantage to land a pre match attack and drive Crews shoulder first into the ring post. The match followed with Benjamin targeting the injured shoulder until an exchange which led to Benjamin running into the ring post giving Crews the upper hand. Crews followed up with a powerbomb and 1-2-3. MVP followed up by trying to raise Crews’ hand in victory distracting him just enough for Bobby Lashley to surprise him and lock in the full Nelson, laying Crews out.

It looks like the MVP and Lashley duo may be moving onto a US title feud, which seems like a harsh demotion from the world title feud only a few weeks ago. That being said if done right this could be a very enjoyable program.

Ended in referee stoppage after interference from Nia Jax

Rey Mysterio began this promo by telling Dominick that although he was proud of him for taking on Rollins last week, it was very dangerous what he did and he was very worried about him. He said that the fight is between himself and Rollins and he will take it from here. Dominick then on the mic summoned Rollins to the ring by letting him know that the Mysterio’s want a fight. Just on queue Rollins then appeared, joined by Murphy and Austin Theory.

All three advanced to the ring until Rollins stopped and left his disciples to do the work and attack the father-son duo. Alister Black and Humberto Carrillo made their way to the ring and attacked the two for the save. With the numbers advantage Carrillo, Black, Rey and Dominick took out the disciples, as Rey delivered a 619 to Rollins in the ring before trying to take Rollins to the ring steps in an attempt to give him a taste of his own medicine. The two disciples made the save, turning the tables and attempting to do the same with Dominick until they were chased off with chairs bringing a close to the show.

A solid close to the show that probably like the Edge segment deserves a watch. This has the potential to be a  good storyline if done properly, and I am excited to see where they go with this next.