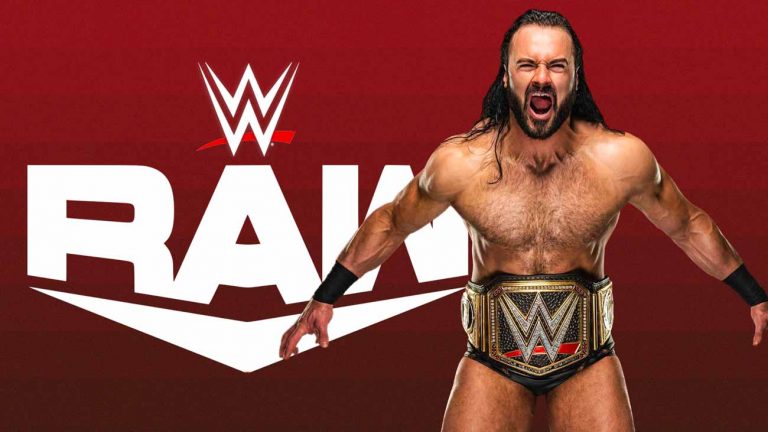 Continuing on from last week Orton was again in the ring cutting a promo to further clarify his challenge to Edge. He explained how he is the best in the company at the very thing WWE is built around, ‘wrestling’.

Edges music then hits as he makes his way to the ring. He explains that Orton was gifted everything he has been given, and contrasts this with the times Edge has had to fight and claw his way throughout his career, and as a result he is much better in the ring than the Viper ever will be. He then told Orton that he doesn’t appreciate the sport as much as himself and the rest of the locker room does, and proceeded to accept the challenge for a match at backlash.

Rollins in a much more stable state than he was in last week told Murphy that he has had a revelation. He went on to say that Mysterio was but a cathartic sacrifice for the greater good and the Monday night Messiah now understands the leader he is required to be. He was then interrupted by Carrillo who referred to Rollins as a coward for beating up his hero and challenged Rollins to a match. Rollins, not dressed for competition then accepted the match on Murphy’s behalf although he is already scheduled for competition later on tonight.

Murphy got the win after a ‘Murphy’s law’ on Humberto. Rollins played his part at ringside to ensure the victory for his disciple, as well as instructing Murphy to continue the assault post pinfall. This led to Aleister Black rushing to the ring to make the save. After missing a Black Mass on Murphy the heels escaped from the ring setting the stage up for their singles match later on in the night.

Addressing her upcoming match this Friday night, Flair claimed that she will demonstrate that she is in a whole other level of champion to Bayley, and when they come face to face she will prove who the greatest champion truly is.

Riott came out strong early in the match, but Flair quickly turned things around to lock in the figure eight for the win.

MVP adds to his efforts to recruit Bobby Lashley by interrupting an interview he was having with Charly Caruso. MVP alludes to Lashley’s lack of ambition by stating he would rather go after easy battles against clowns like R-Truth and goes on the dangle the carrot of going after a real prize like the WWE championship. MVP leaves Lashley to think things over and runs into Lana, telling her that if Lashley is looking for someone to manage him to higher heights to give him a call. What followed can only be described as one of the bigger over reactions of the night as Lana freaks out and yells after him.

Lashley vs Truth followed, R-Truth began the match by doubling down on his claim that he would take down Tom Brady to win back his 24/7 title, again confusing Tom Brady for teammate and current 24/7 champion Rob Gronkowski. Lashley then made his way to the ring and immediately charged down Truth who ducked out of the ring and popped in the Pretty Ricky teeth he had hidden at ringside. This did little to help Truth when Lashley proceeded to brutalise his opponent using the ring post, before locking in the Full Nelson for the submission victory.

Following a Twisted Bliss onto Billie Kay, Peyton Royce broke up the pinfall attempt and proceeded to brutalise Bliss into the turnbuckle seemingly ignorant to the referees instructions to stop. This led to the disqualification victory and retaining of the titles for Bliss and Cross. Immediately after the Iiconics were arguing backstage, clearly upset over Royce’s actions Kay slapped her friend in the face before consoling each other with a hug.

Kairi Sane welcomed Asuka to the ring to celebrate the accomplishments of the newly crowned Raw Women’s Champion. Going on to list her long list of accomplishments as with this title Asuka has achieved every title and accomplishment in the company for a women’s wrestler.

Nia Jax then made her way to the ring explaining that Asuka didn’t win the title she was merely awarded it and vowed to relieve her of the championship soon.

Later on in the night Jax tracked down Sane and attacked her backstage leading to a brawl between Jax and the Women’s champion as she defended her friend.

Natalya dominated the match early on locking in two submission holds with Baszler narrowly fighting out of each. The momentum turned as Baszler locked in the Kirifuda clutch onto Natalya leading to her losing consciousness and Baszler picking up the win. Natalya, clearly frustrated by the loss, started breaking down the set of the KO show that was being assembled around her in the ring for the following segment.

The KO show started this segment with Kevin Owens reporting that although he finally had his Wrestlemania moment he had suffered an injury that’s kept him off TV in the meantime. He welcomed to the show Zelina Vegas faction whilst also welcoming back similarly injured (at the hands of Andrade) Apollo Crews.

The tag match followed with decent back and forth and no real momentum being gained by either team. Apollo Crews and Andrade tensions were built with Andrade avoiding all interaction with Crews by tagging out when he came in. Match was finished with Vega distracting the referee in an attempt to have Austin Theory land a cheap shot on Crews. Crews however ducked the shot leading to Garza being knocked down followed by a pinfall and victory for the returning superstars.

Following the match Andrade and Garza clearly mad at Theory for the loss laid out Theory with a vicious assault with Vega calling him useless and leaving him beat down at ringside effectively ejected from the group.

Addressing the scheduled match against King Corbin later in the night, McIntyre said he had a claymore kick fit for a king ready and waiting for him.

Black clearly ready to get his hands on Murphy, wasted little time. Starting the match right on the offence and going after Murphy early on. Not long until attention was brought away from the ring as Rollins came across previously laid out Austin Theory still at ringside from the Andrade/Garza attack, and offered him a hand up sending him into the ring to attack Black, handing him the DQ victory. Murphy and Theory then continued the attack on Black at the command of Rollins. Rollins went on to embrace Theory with him returning the hug, leading to the latter being recruited as Rollins newest disciple.

The match was started with a surprise appearance by Bobby Lashley and MVP who made it known they were indeed watching. Decent back and forth action with McIntyre proving too much for the King of the Ring winner, unable to get much more than a one count. Corbin whilst being able to reverse one Claymore kick attempt then fell to a follow up for the 3 count. With the match being over and Lashley still looking along at the ramp, the WWE champion then turned his attention to Lashley issuing him a challenge by stating “I want to fight you” as Raw was brought to a close.