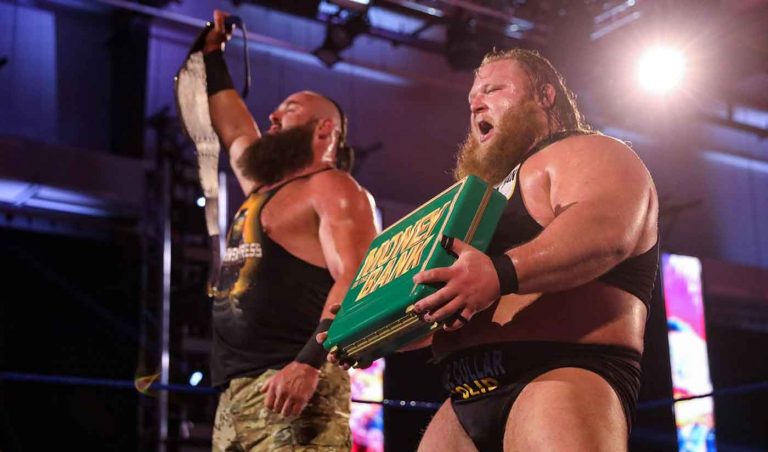 The Miz and John Morrison start the show by making fun of the less than likely Money in The Bank briefcase holder. Otis explained how growing up he had troubles learning, and sports made more sense to him than school ever did. As the taunting from the former tag team champions continued Otis was issued a challenge for a match later on tonight, being that Tucker isn’t currently available due to “dysenberry from the Oregon trail”.

Miz told Otis to find anyone in the locker room to be him tag partner as the segment went off the air.

Continuing from the feud heading into Wrestlemania, we had Elias taking on King Corbin in the first round of the intercontinental championship tournament. With King Corbin dominating most of the match, his confidence got the better of him deciding to take some time to showboat using his rivals own guitar to play a song himself. This only served to light a fire under The Drifter, and rolls up Corbin for the pin fall victory.

A short back and forth match, ended with a pin reversal. Dana Brooke adds to her resume with another upset over Naomi. Carrying over from her previous win in Money in The Bank qualifier, this places Dana Brooke in good contention to carry this feud further, or as a credible title contender for the Smackdown Women’s Championship down the line.

Flair, the NXT Women’s Champion, was invited from RAW to Smackdown as one of the companies new “brand invitations”. Not long after Flair started Bayley’s music hit and she made her way to the ring accompanied by best friend Banks. The two then reminisced about the last time they had seen Flair in a losing effort to Bayley for the Smackdown Women’s championship and proceeded to tell Flair to “get the hell out of our ring, right now”.

Flair then added fuel to the tension brewing between the two by referring to Sasha Banks as an “afterthought” in Bayley’s historic title reign, asking her if that’s okay with her. This all led to a champion vs champion match being scheduled for next week’s Smackdown between Flair and Bayley.

Clearly a disgruntled trio, they explained that after serving the country they failed to be welcomed back with open arms. As a result they claim to welcome us with closed fists.

The two training partners were matched up in this excellent first round matchup in the Intercontinental Championship tournament match. Great technical skills from start to finish as to be expected with these two competitors. Bryan locks in the heel hook and proves too much for Gulak who has no choice but to tap out as Bryan advances to round 2.

In ring promo follows where Bryan vows to win the title he was forced to vacate and bring much needed prestige back to the WWE’s workhorse championship.

Dolph and Deville then backstage. Deville then tells us that all Mandy was good at was being pretty, and then asked her if all she wants out of life is to have a family and live her life in a trailer with Otis.

Otis & Braun Strowman vs. The Miz and John Morrison

In the fallout from Smackdown’s opening segment we saw Bruan Strowman being recruited as Otis’ tag team partner for his match against The Miz and John Morrison. Yet again we have two singles wrestlers defeating an established tag team in the WWE raising more questions over the already fragile tag team division.

At one point the two powerhouses hit Morrison with a double caterpillar, Strowman very much needing to practice his form. The match ended with a powerslam from Strowman onto Morrison and the pinfall victory. Mandy Rose then entered the ring after the match for a quick distraction as the Monster Amongst Men caught Otis sneaking up for what seemed like a quick cash in attempt on the champion. The two then laughed it off and bumped fists as the show drew to a close with the two celebrating in the ring.