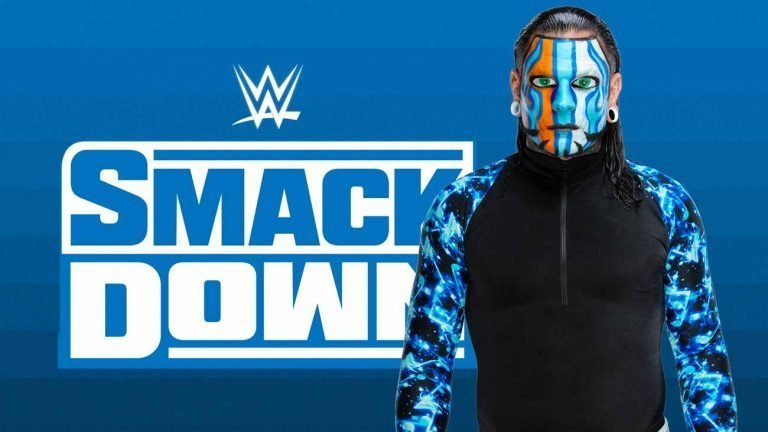 With just one more show to go before next Sunday’s Backlash, this week’s Smackdown was really ramping up the main feuds heading into that show. Setting up another match with Hardy vs Sheamus and a title change in the main event, there was plenty of action throughout leading to a really enjoyable show.

Before Jeff Hardy opened this week’s Smackdown it was announced that Elias had suffered multiple injuries as a result of last week’s attack. Hardy began by letting the audience know that the accident that occurred last week was indeed something awful. He went on to explain his recollection of arriving at smackdown last week, he pulled up to the show and was immediately knocked out and awoke to the police putting him in their van and smelling of alcohol. He also explained that eyewitness accounts from the scene of the crime described the culprit to have red hair and a red beard… Incomes Sheamus.

Sheamus grabs the mic and interrupts Hardy calling him a junkie, and anyone who supports him are enablers. After a comment about Hardy constantly disappointing his family a brawl broke out between the two which ended with Sheamus getting the upper hand with a brogue kick into the plexiglass outside the ring. WWE seems to be persisting with this questionable storyline. Obviously if Jeff Hardy has agreed to be part of this and is okay with them using his recent troubles to advance this feud then we can be okay with it too. It just feels to be in poor taste.

Earlier in the night Otis had stolen Kin Corbins crown and was seen dancing around and playing with it. This led to an infuriated Corbin getting things under way quickly with a pre match attack on Mr. Money in The Bank. Just as Otis was gaining some momentum mid match Corbin with a chair he stole from ringside struck Otis handing him the DQ victory. Otis quickly recovered from the illegal assault and fired back by laying Corbin out and leaving the ring standing tall.

Otis came out of this looking strong, which is important from the standpoint of him being seen as a credible threat, although an interesting decision to not just have him win this clean if he was going to be standing tall at the end of this match anyway

The match started with a cheap shot from Deville throwing Evans into the ring steps. A solid match with these two women working really well together. Deville was thrown into the referee at one point with the referee calling for help, leading to Deville taking advantage for even more cheap shots at Evans. The match ended with Mandy Rose appearing on the big screens, providing the distraction for Evans to land a Woman’s rights on to Deville and scoring the pinfall.

All around a good match, although a distraction ending involving Mandy Rose was a disappointing way to see it end.

Daniel Bryan and AJ Styles Promo Ahead of Next Week’s IC Tournament Final;
Followed by AJ Styles vs Drew Gulak

Standing either side of the vacated Intercontinental title, Styles and Bryan were in the ring ahead of their title match next week. Like the yin and yang that they are, Bryan was calling Styles a coward for taking the bye and not earning his spot, with Styles claiming that was just smart and Bryan was dumb for not taking to bye to advance to the final. Daniel Bryan also declared that if he won next week he would defend his title each week on tv, with Styles claiming to only defend his title when forced to. These two are two of the best on the mic, and in the ring that the WWE have to offer, and this promo only confirmed that. Next week’s title match has some lofty expectations to live up to.

This promo did lead right into a match between Styles and Drew Gulak. Gulak being one of the most underrated wrestlers on the roster, once again demonstrated he can keep up with the big guys with an amazing match here keeping up with the former WWE champ. Although short, intensity was up the whole time, with the finish coming from Gulak countering a Styles clash into a flipping pin and major win.

Braun Strowman Gets One Over on The Miz and John Morrison

Throughout the night The Miz and John Morrison were playing pranks on Braun Strowman, watching it all unfold from a surveillance van. After Strowman came to find his car destroyed, he made it his mission to find the two and make them pay. Strowman was pointed to where his competitors were hiding out and flipped the van over.

Not a lot to say about this. Seems like it was aimed at reminding us about this feud heading into Backlash, which is understandably quite easily forgotten.

The main event of the night saw new women’s tag team champions crowned. The main thread of the match was the building tension between Bayley and Sasha Banks as they continue to succeed despite themselves. Banks at one point almost secured the win by locking in the Banks Statement on Nikki Cross. Bayley, wanting to be the one to secure the win, tagged herself in with a blind tag. Bayley lost all momentum for the challengers almost costing them the match. The finish came when Banks secured Nikki Cross with a crucifix pin for the pinfall victory.

The imminent split of this team becoming more and more obvious, this match added another layer to their unfolding story. Again the women’s tag team titles are used as a prop to further singles storylines. Hopefully this reign is short lived and the tag titles can eventually be used to build up a tag team division in a huge and very talented women’s roster within the WWE.