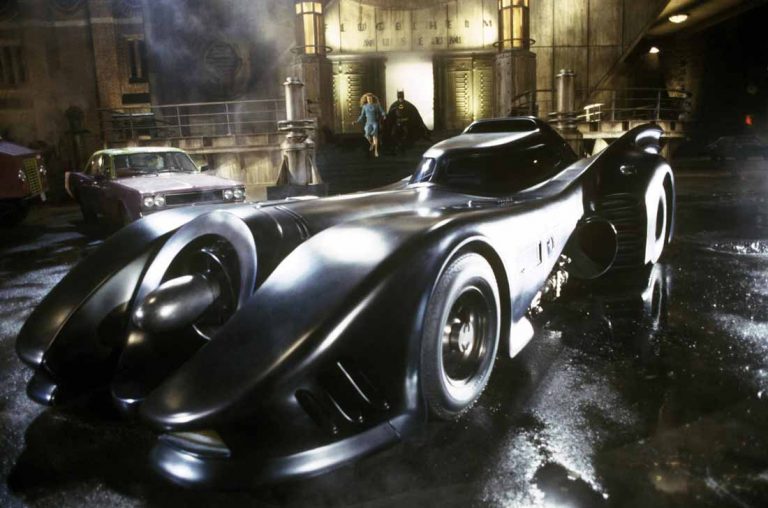 With all the talk about the possibility of Michael Keaton once again donning the Batman cowl in 2022’s The Flash, we’ve been thinking a lot about the Caped Crusader, and more specifically…his Batmobile. Gotham’s bravest son has had a number of heavily armoured automobiles throughout the years, many of whom have been awesome (with a couple of notable exceptions). So without further adieu, we’ll be Ranking The Best Live Action Batmobiles.

Please note that The Batman is set to release in 2021, and when it does we will update this list accordingly.

This regrettable iteration of the Batmobile actually fits perfectly with Batman & Robin’s colourful and comical narrative. With Batman symbols on the rims and a winged finish over the hood, this Batmobile is unmistakably the worst of all the live-action versions of the iconic car. Not to mention the fact that his head pops out of the top of the car, much like a Formula 1 driver. Lucky Gotham City doesn’t have any skilled snippers around.

The “Kilmer Mobile” was slightly more toned down than the Batmobile which would later feature in Batman & Robin – but it was still nothing to write home about.

Although one must applaud the remarkable engineering work that enabled the Batmobile to drive sideways and dodge Harvey Dent’s incoming missile. Someone give that car manufacturer a promotion!

Following on from the more realistic Nolan approach to the Batmobile (see below), was the version that appeared in 2016’s Batman v Superman: Dawn of Justice. Batman’s armoured car was designed with function in mind, and if this list was based on the cars ability to inflict maximum damage and manoeuvre any obstacle, this Batmobile would certainly top the list.

Ah yes, The Tumbler. Introduced in Batman Begins (2005) and subsequently used in The Dark Knight (2008) & The Dark Knight Rises (2012), The Tumbler was created to be a realistic approach to what Batman would need while fighting moral-less crime throughout Gotham city. Whilst The Tumbler doesn’t receive the same aesthetic kudos as 1989’s Batmobile, or that of the original TV Series, it was born out of realism and its use in the movies justified that approach. It’s exactly the kind of vehicle that The Dark Knight’s Batman would utilise.

Coming in second spot is the original TV series Batmobile, driven by Mr. Adam West. This version is the most subtle iteration. This is unsurprising considering the limit budgets at play during the 1960’s, and especially for a show which was very light in tone. But despite that, this Batmobile has stood the test of time due to its obvious nostalgic factor and its sleek finishes.

And here it is – our number 1 entry. The Batmobile that made its debut in Tim Burton’s 1989 Batman movie is without a doubt the best Batmobile that we’ve been given so far. Batman & Batman Returns were both attempts to move away from the cartoonish style of the 60’s TV series and towards a more series, gritty tone. The design and functionality of the Batmobile was created to incorporate these elements. The exterior of the vehicle was designed to intimidate and be impenetrable, whilst the sleekness of the design and and smooth finishes are very pleasing on the eye. When considering the time of the movies release and the fact that Superhero movies didn’t have quite the budget they do today, it is impressive that they designed a car which fit the mould so well.

So there you have it, our list of the best live-action Batmobile, ranked from worst to best. Did you agree with our rankings? Perhaps you feel they should have been in a different order? Let us know in the comments section below.